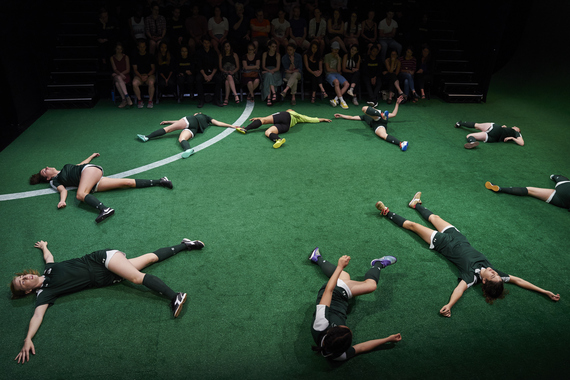 Out of the mouths of babes comes strength and wisdom, it has been said. The babes they were talking about weren't, presumably, a suburban soccer team of sixteen-year-old girls. But sit amongst them while they do their warm ups--before matches on a succession of Saturday afternoons--and out of their mouths come strength and weakness, plus assorted words of friendship, hate and bodily functions. This is the world of Sarah DeLappe's The Wolves. Take a seat in the bleachers surrounding the wedge of AstroTurf at the Duke on 42nd and you'll get a fascinating, riveting earful.

Youth soccer teams work, at their best, like a machine. While the goal keeper and one or two others might stand out, the rest are relatively interchangeable; all are hopefully proficient at the game, and it's the teamwork that you see from the stands. DeLappe and her director Lila Neugebauer have given us a faceless crew of nine girls; all except the keeper are dressed in identical green uniforms, from shin guards up. (Cleats are an assortment of brands and colors.) DeLappe doesn't even assign her characters names; they just go by the number emblazoned on their uniform.

We get that this is not just going to be some generic, adolescent play from the very first minute, when different pairs of girls have different conversations simultaneously interweaved: one's question about the Khmer Rouge (apparently for a school assignment) is answered by another's answer about tampons. This is new dramatic territory, a world apart from anything Edward Albee, David Mamet or A.R. Gurney might conjure up.

The author tells a fully-realized story over the course of a taut ninety minutes, skillfully dropping information here and there so that her audience can gradually put things together and realize what has purposely not been spelled out in capital letters (or in speeches where one character or another suddenly sounds like a mouthpiece for the author). Part of what makes DeLappe's The Wolves--not to be confused with Hellman's The Little Foxes, which is being revived in April--so satisfyingly intriguing is her handling of the girls. This mass of green, at first, is almost anonymous; none of the stereotyping that playwrights commonly use (the ultra-pretty one, the awkward one, the boyish one, the anorexic one, and more). Here, they are just #25, #7, #14, #2. Different parts of the soccer machine. 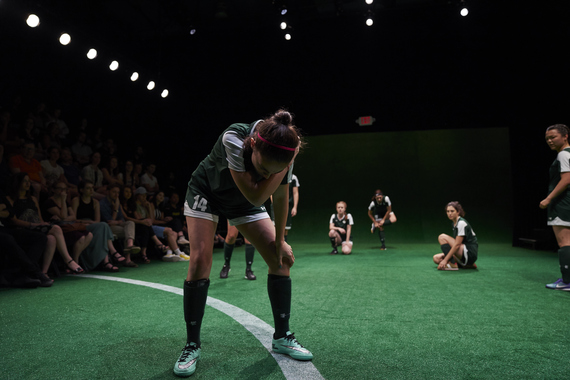 But as DeLappe proceeds, she develops all nine nameless girls into clearly identifiable characters. So much so that in the final scene, when two of the teammates are absent for dramaturgical reasons, the playgoer can likely scan the group and quickly identify which girls are not there. This is highly impressive, especially from a twenty-six-year-old, first-time playwright. It goes without saying that DeLappe and director Lila Neugebauer have a clear and personal knowledge of the world of American youth soccer. Having spent far too many weekends shuttling children to soccer matches--travel and indoor--I can attest that the author and director have it precisely right.

(The Wolves are members of a so-called "travel" team, which plays games around the region and thus "travels"--as opposed to a less competitive team, which only plays locally. The play takes place during the winter season, when team members keep in shape by playing in an "indoor" league of six-on-six games in a cavernous sports dome.)

Neugebauer--who directed the recent Signature Plays and The Wayside Motor Inn--is yet another one of the new generation of female directors whose work is beginning to get the attention it deserves. She does a scalpel-precise job with her young Wolves; DeLappe has a lot going on in the world of her play, and Neugebauer guides our attention so we catch it all. Laura Jellinek, of Small Mouth Sounds and The Nether, provides yet another ideal set for the play.

The character anonymity doesn't make it easy to identify individual performers, but there are several standouts: Brenna Coates as #7, a loud and sarcastic bully; Samia Finnerty as #14, who challenges her in the play's biggest confrontation; and Tedra Millan as #46, a newly-arrived player who lives in a yogurt. (You need see the play to understand that one.) There is also a notable performance by Lizzy Jutila as #00, the goalkeeper, an overachiever who is virtually silent due to nerves until a remarkable interlude late in the action. Sarah Mezzanotte (#2) and Susannah Perkins (#11) also help brighten the atmosphere. 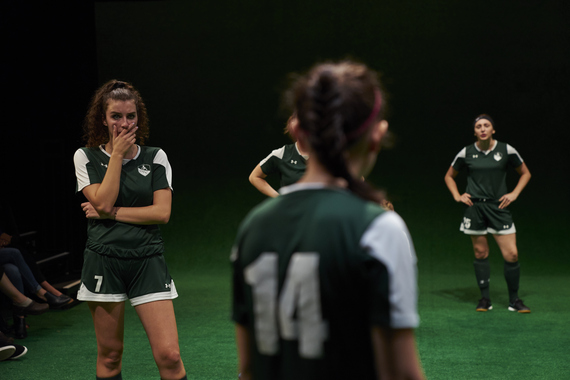 The non-profit Playwrights Realm--now in its tenth season--first mounted the play for an extremely limited run in September. Conscientious theatergoers who didn't get to see The Wolves, then, should make sure not to miss it this month. The copy line on the program cover says "Fierce. Fearless. Females." I'll second that.

.
Sarah DeLappe's The Wolves opened December 5, 2016 and continues through December 29 at The Duke on 42nd Street