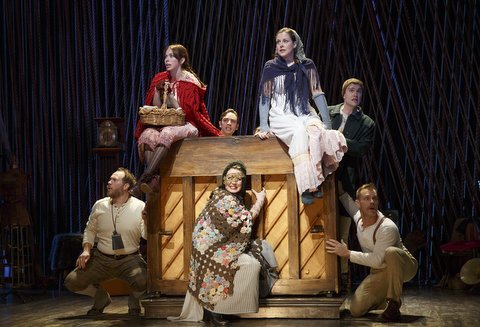 The Cast of Fiasco Theater's Into the Woods at the Roundabout. Photo: Joan Marcus
Stephen Sondheim and James Lapine are probably feeling pretty swell just now, with the motion picture version of their 1987 musical Into the Woods having grossed over $140 million in the four weeks since it opened on Christmas Day. If they wander over to the Laura Pels, where the Fiasco Theater's production of that same musical is playing under the auspices of the Roundabout, I imagine they'll feel even more jolly. $140,000,000 is fine, and a testament to the public appeal of their somewhat Grimm fairy tale of a Broadway musical; but what's on stage at the Pels is engagingly winning.

Fiasco is a young company started by graduates of the Brown University/Trinity Rep M.F.A. program which strives for "dynamic, joyful, actor-driven productions." That is a more-than-accurate description of their Into the Woods, which originated in May 2013 at the McCarter Theatre Center in Princeton and spent last summer at the Old Globe in San Diego. That this is something other than another colorfully plush production of the piece is evident upon entering the Pels. The two sides of the stage are a collage of iron piano frames; I counted forty, in all. The proscenium consists of ten keyboard mechanisms, five on each side; the back wall is made up of obliquely crossed ropes that look reasonably like wire piano strings. (The scenery is from Derek McLane, who did something of the sort with gramophones for I Am My Own Wife.) Instead of an orchestra, there is one studio upright located center on a movable base. Otherwise, there are a few instruments scattered among the scenery.

Yes, this is obviously going to be another one of those actors-play-the-instruments affairs, which have become dime-a-dozen since John Doyle did it in 2004 with Sondheim's Sweeney Todd. In this Into the Woods, though, the device works well. Industrious music director Matt Castle remains at the piano throughout (and has a couple of small cameos, too), while musical support comes from all sides. Prominent are a cello and a bassoon on either side of the stage, which help keep the show sounding like Sondheim's Into the Woods. In other places they add guitar, banjo and spoons, giving the score something of a country twang; not what Jonathan Tunick would do, perhaps, but it works fine in numerous places (like the "bugs on her dugs" section of the Prologue).

The cast is similarly pared down, to a hard-working ten, and just about everyone has their "moments in the woods." Most of them get to double and triple; they all play instruments, too. The cast is headed by Ben Steinfeld and Jessie Austrian -- co-artistic directors of Fiasco -- as the Baker and the Baker's Wife. Steinfeld is also co-director of this production, sharing the chores with Noah Brody (who plays the Wolf -- using a highly effective, taxidermied wolf's head -- and Cinderella's Prince). The company seems especially close-knit; Brody is the third of Fiasco's artistic directors, and husband to Ms. Austrian. 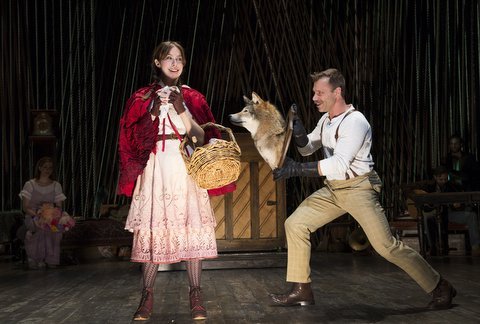 Emily Young and Noah Brody in Into the Woods at the Roundabout. Photo: Joan Marcus
The most delectable performance comes from Emily Young, who toggles between Red Ridinghood and Rapunzel. Ms. Young is a comic find; she comports herself like a delectable intermix of Christine Baranski, Ruth Gordon and Minnie Mouse. Patrick Mulryan is an overgrown but excellent Jack; Claire Karpen makes an effective Cinderella; and Liz Hayes plays the caustic Stepmother and Jack's mother while prominently spotted as the expert bassoonist. The one less-than-successful performance comes from Jennifer Mudge -- recently seen as Gloria in Rocky -- but this is most probably a costume problem. Mudge does very well as the rejuvenated Witch in Act Two, but her ugly old crone in the earlier stages is unconvincing.

Adding to the delights of the evening are Andy Grotelueschen, who starts the evening as Milky White. (His cow heart attack, later on, is sublime.) At one point in the opening number Grotelueschen moos, twirls and sidles next to Mr. Brody to stand behind a curtain rod with a heavy drape; instantly, they are the mean stepsisters. Groteleschen and Brody teasing Cinderella ("You wish to go to the festival!?!"), with their full mustaches, is the moment when we know this Into the Woods will be special. These two actors, being decidedly non-princely in looks and bearing, also make capital fun out of "Agony."

It is unfortunate for this production that another version of the property, with Meryl Streep & Co., is presently on display; your typical theatergoer, who in the past month has contributed to the aforementioned $140 million, is not so likely to take the kids to another Into the Woods quite so soon. For Sondheim fans, though, this Woods merits a visit to the Roundabout. Not only does the reduced production allow you to concentrate more closely on the words and music; it might well be the most emotionally satisfying version of the show you have seen, and that includes the original.
.
Into the Woods, the Fiasco Theater production of the Stephen Sondheim-James Lapine musical, opened January 22, 2015 and continues through March 22 at the Roundabout Theatre Company's Laura Pels Theatre

Art Into The Woods Stephen Sondheim