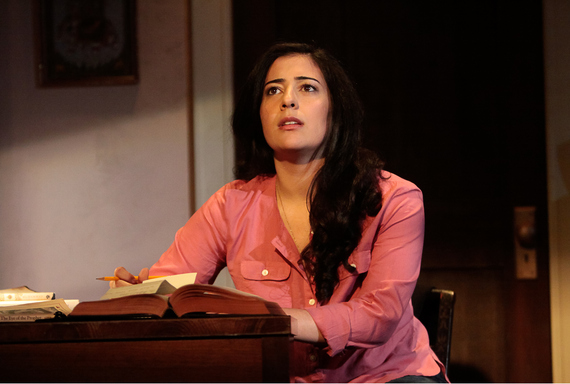 Nadine Malouf in The Who and the What, photo credit: Erin Baiano

A 32-year-old writer, with no husband but a Harvard M.F.A., struggles to finish her novel about gender politics while her widowed father and younger sister try to marry her off. This sounds like Wendy Wasserstein country, and it is indeed a production from the late scribe's artistic home at Lincoln Center Theater. Only the action takes place in Atlanta, and our hero's name is not Heidi or Janie or Gorgeous but Zarina.

Zarina (Nadine Malouf) struggles with her religion, or more specifically with the inequality and mistreatment of women. ("Wives are like farms," she quotes from The Prophets Sayings About Sex, "husbands can farm them anyway they want.") Her masterwork--which she finishes writing during intermission--is a novelistic treatment of one of the Prophet's cornerstones of the religion. Simply put, she suggests that women are punished with restrictive covenants not because of religious pronouncements but due to man's attempts to control their own jealousy and lust. 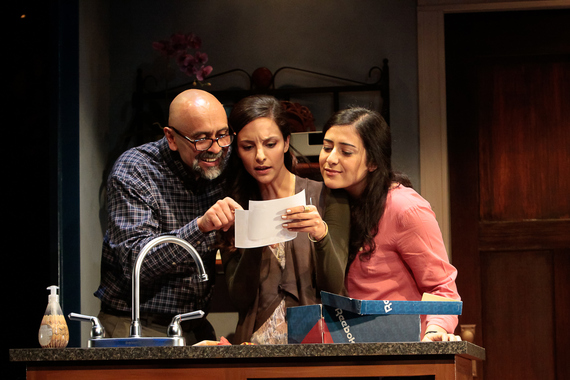 Bernard White, Tala Ashe and Nadine Malouf in The Who and the What, photo credit: Erin Baiano

This is dangerously blasphemous stuff, causing trouble with father Afzal (Bernard White), sister Mahwish (Tala Ashe) and boyfriend-turned-husband Eli (Greg Keller), the latter a white convert from Detroit. Mr. Akhtar, though -- having instantly established himself, with Disgraced, as a provocative, wise and funny playwright -- knows how to charm us into his story; how to make us care about his characters; and how to ease us into the moral predicament while less artful playwrights might just club us over the head with it.

Director Kimberly Senior -- who made a smashingly good showing with Akhtar's first play--does a similarly fine job here. Malouf gives a strong performance as the obstinate but awkward writer, straddling the line between what is proper and what is right: how to be a good and respectful woman but speak the truth. The best performance comes from Mr. White as the tycoon of a father who has "gone from driving a cab to owning 30% of the taxis in Atlanta" but cannot find the way to control his brilliant but wayward daughter. (Credit the actor, yes, but also the author.) Senior and White are repeating their chores from the world premiere of the play in February at the La Jolla Playhouse, along with set designer Jack Magaw who provides an effective manner of presenting the play's five locales.

The strong religious component of the play puts the traditional audience--which in New York, at least, is predominately non-Muslim--outside the story, looking in. Akhtar's inequality arguments, though, can easily be applied to other, more locally familiar religions. This makes his play significantly more universal than it might at first glance appear. A modern-day American "good daughter" would create just such a stir writing about other mainstream religions.

While The Who and the What does not displace Disgraced from its perch near the top of the most important new American plays of the decade, it suggests that Mr. Akhtar has plenty to say and knows how to say it.

The Who and the What, by Ayad Akhtar, opened June 16, 2014 at the Claire Tow Theatre