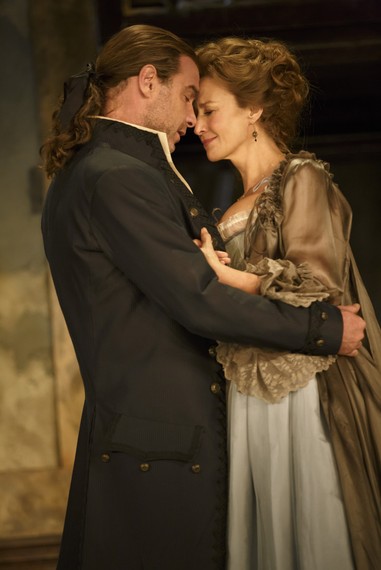 Christopher Hampton's 1985 stage adaptation of Choderlos de Laclos' 1782 epistolary novel Les Liaisons Dangereuses last appeared locally in a middling 2008 production starring Laura Linney and Ben Daniels at the Roundabout that was, despite the dazzling dialogue and amorous action, pretty much dull as ditchwater. Compared to which, this new production at the Booth--which originated at the Donmar Warehouse in London starring Janet McTeer, and with Liev Schreiber added to the mix for New York--rehabilitates the play's reputation. This new Liaisons, directed by the Donmar's artistic director Josie Rourke, is intelligent, colorful, and lively (mostly). Call it a solid B+.

It is questionable--or perhaps dangereus?--to compare an all-new production with the original; one has to assume that the majority of the potential audience is coming to the play innocent. (In this particular case, it is also possible that they have images of "Dangerous Liaisons," the 1988 film version starring Glenn Close and John Malkovich, which was non-slavishly adapted from the play by Hampton himself. But that is beside the point at hand.) Playgoers who never saw the original Royal Shakespeare Company production--which was imported to the Music Box in 1987, with the London cast--can hardly be expected to compare what they see here and now with what they never saw.

And yet... did the original Les Liaisons work so well because it was a brilliant production, directed by Howard Davies (who died on Tuesday, as it happens) and draped in vibrantly eye-filling, white linen by Bob Crowley? Or was the original so special because it was presumably formulated by director and designer in conjunction with the playwright? And correspondingly, were the characters of La Marquise de Merteuil and Le Vicomte de Valmont so tantalizingly vibrant because Hampton and Davies had actors Lindsay Duncan and Alan Rickman to shape the dialogue on and build the scenes around? (Rickman, for his part, was so successful as the dashingly dastardly Valmont that he quickly catapulted to a film career as a high-paid villain.)

This discussion doesn't exactly apply to the revival at hand, but it does bring up a nagging question. Revivals can be strong or weak, of course, just like new plays; my theory is that a revival isn't a revival to someone who's never seen it before. We don't have to look any farther than Arthur Miller's A View from the Bridge, which has had two thoroughly satisfying Broadway revivals over the past six years. (The 2010 version, directed by Gregory Mosher and starring this selfsame Mr. Schreiber, was stunning, and that in no way impacted the even more powerful production last November from Ivo van Hove.) 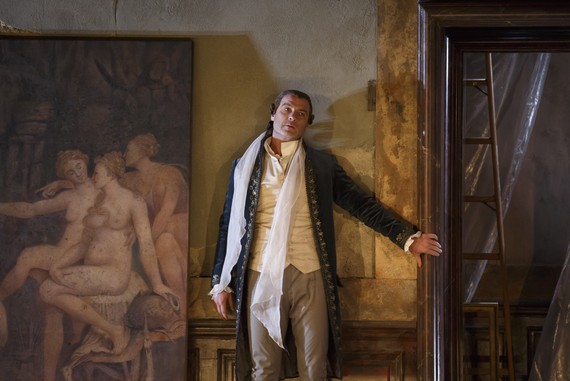 But watching this satisfactory-but-not-exceptional Les Liaisons, I can't help thinking of two other recent revivals which transferred from London: Equus and Amadeus. These plays--both written by Peter Shaffer--were groundbreaking and unforgettable theatrical experiences for people who saw the original productions (Equus: London, 1973 and New York, 1974-7; Amadeus: London, 1979 and New York, 1980-83). The recent revivals--Amadeus in 1999 with David Suchet, Equus in 2008 with Richard Griffiths and Daniel Radcliffe--were anything but. "Equus isn't much of a play," new viewers might well have surmised after watching the revival at the Broadhurst. And they were right, based on what they saw; but many of us who remember John Dexter's production--starring Alec McCowen (who played it in London) or Anthony Hopkins, Tony Perkins or Richard Burton (who played it here)--are still shaking from what they witnessed. Ditto Amadeus; it didn't matter who you saw in the title role--Paul Scofield, Ian McKellan, John Wood, David Dukes, Frank Langella--the combination of the text, Peter Hall's direction and John Bury's physical production left you practically gasping, instead of stifling a polite yawn at the recent rendition. Given the revival fate of these dramatic highlights of their era, it is perhaps not altogether surprising that the same has happened--twice--with Les Liaisons.

Without doing an intensive survey, this does not seem to be as much of an issue with American plays; or, I suppose, with British plays that did not originate within the confines of well-funded non-profits like the Royal Shakespeare Company or the Royal National Theatre. We have seen multiple Streetcars and Salesmans, Glass Menageries and Virginia Woolfs, and even Long Days and Front Pages. All either stand on their own merits, or don't; none of these productions have been torpedoed merely because they weren't "the original."

Does this happen in part due to the resources to develop new plays of the RSC and the National? This might well be. The three plays in question were not just put on stage in their original productions. Playwright, director and designers worked together, simultaneously; if the director came up with a brilliant idea, or if the set designer stumbled upon a brilliant concept that illuminated the script, the playwright could and did make alterations to accommodate said contributions. This happens in traditional, commercial theatre as well; but the time available to do so is comparatively limited, as are the funds for exploration.

A piece of effective staging, or a novel set change, can make stretches of dialogue redundant--and a wise playwright will happily and rightfully take advantage. None of these visual elements translate to revivals, alas; is this, perhaps, why the recent Equus, Amadeus and Les Liaisons seem to be lacking the vibrant tautness of the original productions? One has to assume that fifteen or twenty years from now we shall see new productions of the recent National Theatre instant classics, War Horse and The Curious Incident of the Dog in the Night-Time. Both of these were mesmerizing, in great part, due to advanced stagecraft; the scripts might remain as effective in revival, but will the plays have the same impact without the amazing work of the puppeteers and actors on the one hand, and the mind-exploding sets, lighting and music of the second? Likely not, I'd wager.

Which leaves us at the Booth with the new Les Liaisons. McTeer is always welcome here, having given us illuminating performances as Nora in A Doll's House (back in 1997 at the Belasco) and as an outlandishly exuberant Petruchio in The Taming of the Shrew (this summer at the Delacorte). Her Marquise is successful, on its own; but she seems to be observing the proceedings, rather than determinedly pulling the strings. Part of this might be due to a mismatch with Mr. Schreiber, who is also an actor of great power. Not quite so much here, as Valmont. Without the pair engaging in a dastardly battle of wits on a taut tightrope, the play restlessly drags on through almost three hours. The subsidiary women--Birgitte Hjort Sørensen (as the devout Madame de Tourvel) and Elena Kampouris (as the young Cécile Volanges)--are both effective, with Mary Beth Peil and Ora Jones making good showings as the mothers of Valmont and Cécile. 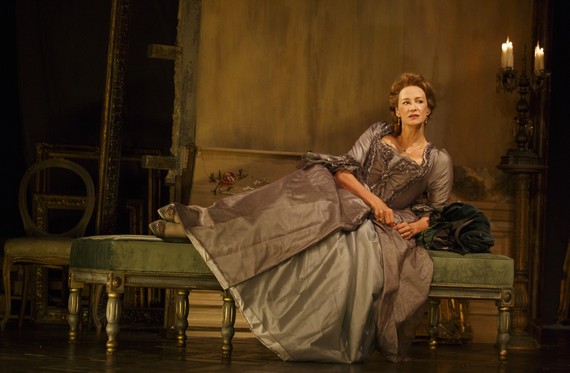 Let it be added that the seduction scenes--especially the first one--have modern connotations, closely mirroring modern-day discourse about "locker room talk." This is not the fault of play or director, but it is disconcerting, in the middle of Les Liaisons Dangereuses, to flash images of D. Trump.
.
Christopher Hampton's Les Liaisons Dangereuses opened October 30, 2016 and continues through January 22, 2017 at the Booth Theatre