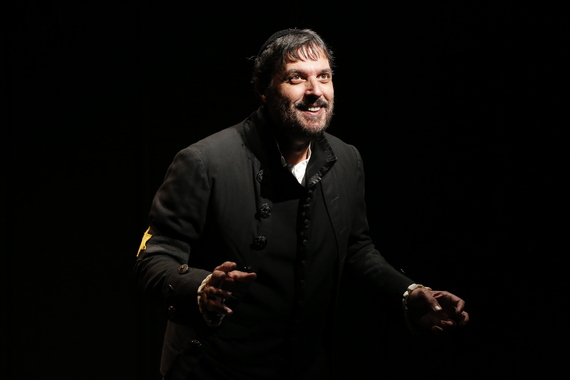 Robert Cuccioli in Rothschild & Sons. Photo: Carol Rosegg
The York Theatre Company, the determined, roll-up-your-sleeves-and-make-a-musical group in the basement of a church within the Citicorp Center, has rolled up their sleeves and -- with great care and determination -- made a "new" musical out of Jerry Bock & Sheldon Harnick's The Rothschilds. This severely cut-down version, fashioned by the two surviving authors (Harnick and librettist Sherman Yellen), is called Rothschild & Sons. It brings what had been an overstuffed and overloaded opus back to the stage, and allows the material to shine brightly in places. It should prove highly popular with the York's loyal subscribers as the opening salvo of their 46th season. It does not, though, solve the show's myriad problems.

The Rothschilds -- based on the 1962 best seller about the banking dynasty by Frederic Morton, who goes uncredited in the program -- was created by a highly ambitious but overreaching producer lusting for a hit along the lines of Fiddler on the Roof; he seems to have worn down Bock & Harnick, the Fiddler songwriters, until they wearily and warily agreed to do it. The show was so desperately troubled that it permanently severed the partnership of Bock & Harnick, which over thirteen years had brought forth the ambitious Fiorello!, the classic Fiddler, and the lustrous She Loves Me. As for their final effort, Harnick wrote at the time that "considering that The Rothschilds is actually an impossible show to pull off, I think we did pretty well."

It is an impossible show to pull off; they couldn't do it then, and they can't do it now. The story tells of a poor-but-ambitious peddler in the Frankfurt ghetto, circa 1772, who becomes the father of five sons (although the musical writes out the five daughters); becomes banker to the chieftains or Europe; and ultimately helps tear down the ghetto walls, or at least some of them. This, in 1818; it goes without saying that this was not a lasting freedom.

That being the case, the Rothschilds musical had to tell us about the man and the sons and the money; the show, in 1970, got bogged down in the final stretch with twenty minutes of characters singing songs and haggling about bonds, which was as fascinating as it sounds. A good deal of the second act was taken up with scenes and songs dealing with the progress in England of number three son Nathan, while the other brothers sat in their dressing room, and his courtship of a "Jewish Joan of Arc." The corresponding songs, while displaying the intelligence and craftsmanship that marked all the work of Bock & Harnick, couldn't carry the story. 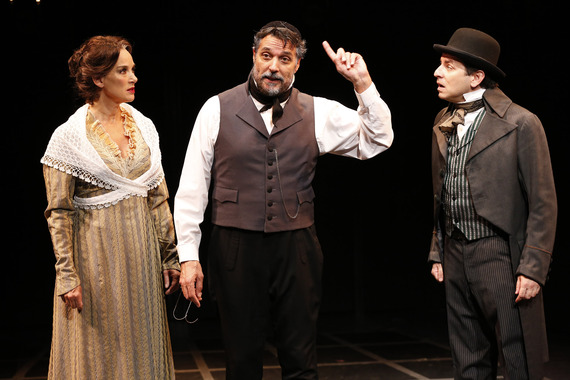 Glory Crampton, Robert Cuccioli and Christopher M. Williams in Rothschild & Sons. Photo: Carol Rosegg
We now have what is said to be a "reimagined" version of the show; from the evidence on display, it seems that they have simply rummaged through the early drafts and reinstated material. (There are several songs here which, if you sat listening to them in Detroit, you would have said -- well, that one is gonna be cut.) They have wisely deleted most of the material about bonds, and poor Hannah Rothschild is helpfully excised altogether. They have also, alas, added reprises that slow things down. The show, which surely topped two-and-a-half hours in 1970, is now performed in an intermissionless 1:50.

The 1970 Rothschild family, with the sons played by both child and adult actors, was comprised of twelve members of Actor's Equity; the present heavily-doubled version has an entire cast of only eleven. Thus, the most memorable moment in 1970 -- when the young sons went into hiding before a pogrom, emerging thirty seconds later as grown men -- is necessarily missing. So is what was probably Yellen's funniest line, about a pawn shop.

Robert Cuccioli, as Mayer, is the standout in the cast. While he might not have the Yiddish twinkle in the eye of Hal Linden -- who originated the role and won a Tony in the process -- he plays the role with authority and charm. (Cuccioli played Nathan in the last New York appearance of the show, off-Broadway in 1990.) Glory Crampton is fine in the problematic role of the wife/mother Gutele, who mostly stands around observing Mayer and the boys; and Mark Pinter piques our interest as an assortment of villains. This production would probably work better with underlying friction between Mayer and Nathan; Christopher M. Williams does not bring much to the role.

Christopher M. Williams (center) in Rothschild & Sons. Photo: Carol Rosegg
Director Jeffrey B. Moss and set designer James Morgan have fit the show onto the small York stage in a professional but not inspired manner. They get the job done, anyway, under restricted conditions. The costumes by Carrie Robbins, budget or no, are relatively impressive.

Even so, the songs of Bock & Harnick are here and play remarkably well. "Sons," "Everything" and "Rothschild & Sons" retain their power, even within the small confines and despite an often-anemic band of only four. "Just a Map" -- which was originally cut during rehearsals - -has been reinstated for Crampton, and is the loveliest song in the show. All told, Rothschild & Sons will give fans of the songwriters an opportunity to enjoy the work, in context; and will give the York a heartwarming tenant for the month. It does not, though, fix -- or "reimagine" -- the show.
.
Rothschild & Sons opened October 18, 2015 and continues through November 8 at the Theater at Saint Peter's

More:
ArtsFiddler on the Roof