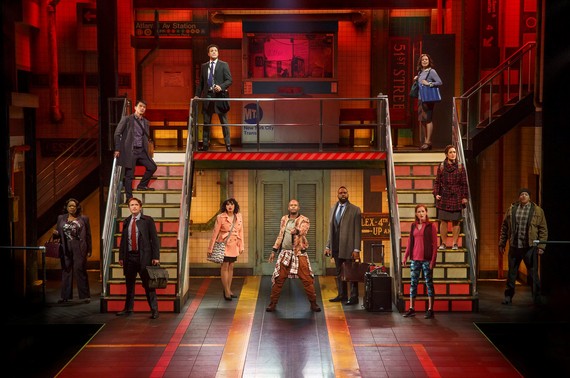 The cast of In Transit
Photo: Joan Marcus

Subways are for singing; at least, in that subterranean Broadway house called the Circle in Square. In Transit follows a group of New Yorkers as they spend their time on the A and the E, the 1, 2 & 3. This musical is not quite a revue, as most of the cast have through roles (when they are not otherwise singing as part of the ensemble). But it's not quite a full musical; more like a series of interconnecting skits, with interlocking characters. The results, like a ride on the L train, are passable with intermittent stalling.

If this sounds somewhat mild for a Broadway musical of the day, it is. They could have done this same show ten years ago, or twenty or thirty. A major character/plot line--the one about the man afraid to tell mother the truth about his long-time live-in boyfriend--could have supported a flimsy comedy back in the 1970s, and probably did. Here the couple gets married, suggesting the show is contemporary, but it's still the same old tame tale of breaking the news to the parents.

The big difference, and In Transit's claim to distinction, is that the show is performed totally a cappella by a group of eleven actors. That's right: a Broadway musical with no musicians at all, live or taped. This is made practical by a character called Boxman, who walks around with a hand microphone hooked up to his own portable amplifier. He makes all sorts of percussive booms and guttural grunts, more or less "eating" the mic; this substitutes for what would be the rhythm section of the orchestra, providing a propulsion without which the show might stall altogether.

This provides In Transit with a modicum of novelty, yes; but members of good old Local 802 of the American Federation of Musicians needn't fear that the show will start a trend and muster a line of pickets. This orchestra-less musical more or less gets by as a novelty, but it looks forlorn compared to the likes of Hamilton, Dear Evan Hansen, The Great Comet, Kinky Boots, Chicago et al.

That said, there is quite a bit of talent in evidence. The songs and what passes as a book were written jointly by Kristen Anderson-Lopez, James-Allen Ford, Russ Kaplan and Sara Wordsworth, who started putting it together as an a cappella evening back around 2000. Of the four, only Anderson-Lopez has graduated to the top tier of songwriters, courtesy of Disney's "Frozen." That said, the team has come up with some workable songs and some funny lines. 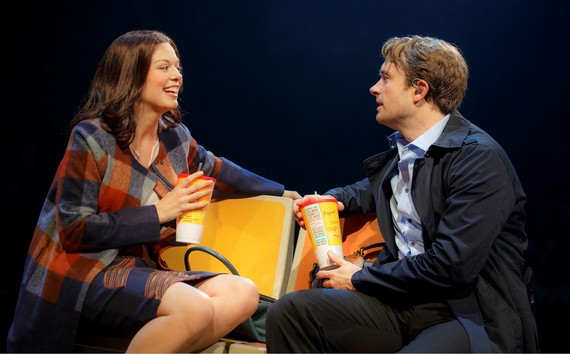 An early version (Along the Way) was on view at the New York Fringe Festival in 2003, and the show was further developed at the Eugene O'Neill Theater Center in 2008. In Transit had its professional premiere at 59E59 in 2010; I found it "an unconventional, unorthodox and unassuming new Off Broadway musical" with a high degree of likability. The show has been rewritten and updated, with three new songs, and given an altogether different production (with only the authors and one of the actors still at the turnstile).

The cast includes several performers who have impressed us in key roles elsewhere, and who provide much of the entertainment. Like Margo Seibert, who played Adrian to Andy Karl's Rocky and who earlier gave a stellar performance off-Broadway as the title character in Marisa Michelson's Tamar of the River. Seibert is bright, funny and personable as the over-thirty temp worker on the verge of finally giving up her dream of getting a role in a Broadway music. Also making a good showing is Erin Mackey (of Chaplin and Amazing Grace), with a refreshing air, boyfriend troubles, and some pratfalls along the way.

Justin Guarini (Women on the Verge of a Nervous Breakdown) and Telly Leung (Allegiance) are charming as the betrothed couple, dated though their roles might be, while James Snyder (of Cry-Baby and If/Then) makes the transition from egotistic Wall Street honcho to likable Staples salesman. The role of Boxman is split between Steven HeaveN Cantor (who provided a welcome charm to the preview attended) and Chesney Snow (who was one of the finest elements in the 2010 production).

Director/choreographer Kathleen Marshall (Anything Goes) has brought a high sheen of professionalism to the show; everything, including the cast, looks good throughout. Donyale Werle's set makes effective use of the not-always-practical Circle in the Square space. She has a treadmill (sometimes serving as subway tracks) intersecting the house, and a token booth--remember when all subway stations had attendants?--on a raised platform at the far end. The costumes by Clint Ramos are functional enough, although the dress made of stitched-together Metrocards is not nearly so droll as the specimen in the 2010 production. 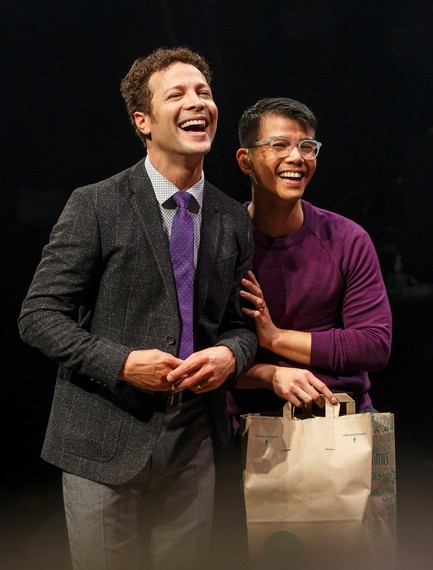 At heart, though, what might have seemed like a novel idea in 2000--an a cappella musical making fun of the New York subways--now borders on the passé. (For that matter, there was a time when you did indeed come across mic-and-amplifier entertainers like Boxman in the subways, but we haven't seen one in years.) As for In Transit here and now, the use of a cappella is hardly enough to float the show; but without the a cappella distinction, would anyone today have bothered to bring this musical to Broadway? Even if we grade it charitably, we have to wonder just whom is this mild entertainment aimed at.
.
In Transit opened December 11, 2016 at the Circle in the Square