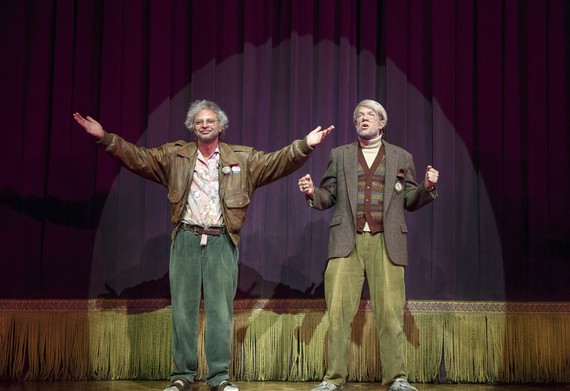 Take two little old bickering men who share a $75-a-month, 5-bedroom rent-controlled apartment at 73rd & Columbus and are celebrities in their own minds; and who are played by younger actors of an indeterminate age wearing ghastly wigs through which their real hair seems to poke through. Put their two-man "show" in the Lyceum Theatre, for no good reason, plop them down on a stageful of reconstituted scenery, and hit them with grossly unearned spotlights. This sounds, most likely, like a recipe for instant disaster and a sizable tax write-off.

Unless it turns out that the actors are keen and their characterizations inspired. And that, happily, is the case with the awkwardly titled (and awkwardly assembled) Oh Hello on Broadway, starring the fictional Gil Faizon and George St. Greegland. Nick Kroll (from Comedy Central's "Kroll Show") and John Mulaney (from "Saturday Night Live" and Fox's "Mulaney") awkwardly shuffle onstage, and within moments smite you over the head with satire and corn so lowbrow, and highbrow, that you strap yourself into the rollercoaster and ride along for ninety-five minutes of hilarious insanity or insane hilarity, take your pick. Laughter ricochets through Broadway's most historic playhouse, with Kroll & Mulaney skillfully stroking the hapless audience by stoking the comic fires with globs of chicken fat (AKA schmaltz).

Crowds entering the theatre might be off-put by the front of house photos; are these guys for real, you might well ask? (Kroll and Mulaney--who have been developing Faizon and St. Greegland for years and years--have a cult audience of their own, although not necessarily one which regularly buys theatre tickets.) Comedic expectations rise as you page through your program, though. John Slattery and Jon Hamm, those former "Mad Men," are not only listed as understudies; they have large headshots and bios four times as long as Kroll/Mulaney combined. (From Slattery's bio: "He is currently starring in The Front Page with Nathan Lane and John Goodman, which is going to be inconvenient.")

While waiting for the show to begin, theatergoers with a keen eye will note that this contemporary New York play has a show portal--framing the stage, in front of the house curtain--that looks suspiciously like Boris Aronson's "Anatevka" portal from the original 1964 production of Fiddler on the Roof.

So what, one wonders even before the lights dim down, are we about to undergo? That question is swiftly answered, and Oh, Hello never lets up. As for the scenery--designed by Scott Pask, who has won Tony Awards for the not-so-similar Book of Mormon and Pillowman--it is full of jokes, including some real belly laughs.

Oh, Hello is not a play, exactly; it is more of a personal appearance by the Messrs. Faizon & St. Greegland, who blithely refer to themselves as "the orange pekoe teabag staining the countertop of American culture" and who "were recipients of a 1997 restraining order keeping us 100 feet at all times away from America's greatest actor, Mr. Alan Alda, baby." That's all you need to know. The evening also incorporates a haphazardly wispy play-within-a-play. The action is also filled out with altogether too much tuna, if you know what I mean; but I don't expect you will know what I mean unless you've seen the thing. And yes, there is too much tuna.

Kroll & Mulaney's antics are not similar to "The 2,000 Year Old Man"; they live in a different world than Mel Brooks & Carl Reiner's creation. But there is an apparent lineage from one to the other, kind of like 1955 Stage Deli vs. 2015 Fairway. Alex Timbers, of Peter and the Starcatcher and Here Lies Love, directs; or perhaps we should say he successfully manages to keep up with his actors (who seem to be unrestrainedly improvising along the way). 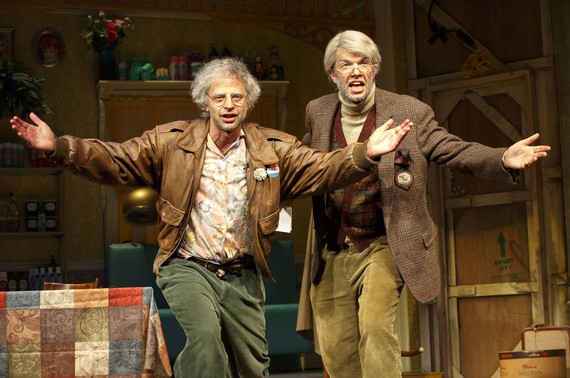 Built into the play is a mini-interview of the talk show variety; we are told that Kroll & Mulaney's minions case the house before the show and find a celebrity, although that sounds a bit of a stretch. (Given that the stars seem to occupy a prominent position within the stand-up and cable worlds, they might indeed be able to pull this off without ringers.) At the first press preview, they pulled Seth Meyers on stage and more or less roasted him for fifteen minutes. Meyers gamely played along, when they weren't cracking him (and we the audience) up. Thus far, we are told, guests have included Lena Dunham, Jimmy Kimmel, Katie Couric, Fred Savage, Laura Benanti and Aziz Ansari.

So no, we can't provide much of a description of this well-nigh indescribable show. But it starts out funny and moves past hysterical to sublime. This is presumably not what old Daniel Frohman had in mind when he built the Lyceum in 1903; but laughter will tell. As for me, I've been frequenting the Lyceum since 1969, and the other night was the first time I've seen a liquor bar briskly operating in the lower, dungeon-like lounge beneath the men's room.

.
Nick Kroll and John Mulaney's Oh Hello on Broadway opened October 10, 2016 and continues through January 8, 2017 at the Lyceum Theatre