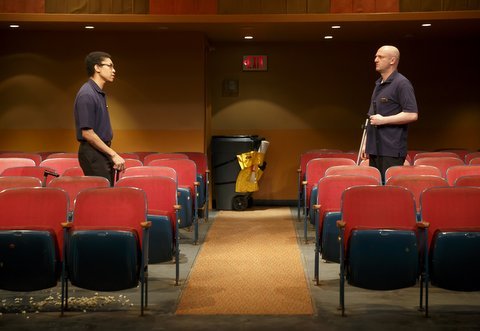 Annie Baker, in The Flick, has drawn three disparate loners in dead-end menial jobs; engaged them in often aimless-seeming banter, as opposed to meaningful discussion; and keeps them at it for three-plus long hours. Being a theatrical alchemist, Baker's oddball characters nevertheless grab our attention, and the sometimes sketch-like morsels combine to form a powerfully compelling and unexpectedly moving evening. You might take occasional glances at your watch, early on; once the gears start spinning, though, you realize that the lumbering pace is very much to the point, as the characters sweep up spilled movie-house popcorn and mop up spilled soda and you are enthralled. This is one of those provocative plays that nourishes playgoers and leaves them with something to cogitate.

Ms. Baker, that prolific playwright who has been brightening the scene with works like Circle Mirror Transformation, The Aliens and her adaptation of Uncle Vanya, writes plays that are not only distinguished; they are also quite unlike the plays of everyone else. (Not to make comparisons, but that's what they said about Eugene O'Neill when he first appeared with Beyond the Horizon and The Emperor Jones.) Like Beyond the Horizon, The Flick -- which originated in the spring of 2013 at Playwrights Horizons -- won the Pulitzer Prize. It has now reopened in a commercial transfer at the Barrow Street Theatre, virtually intact; the back wall of David Zinn's authentically rundown set has been reconfigured, presumably to accommodate the upstage exit, but the cast and production team remain the same.

The three principal players are beyond excellent. (There is also a fourth actor, playing two small roles.) Matthew Maher (of Mr. Burns, a post-electric play) is Sam, a 35-year-old who has been passed over so many times by younger menials that he realizes, beneath his omnipresent and slightly fraying Red Sox cap, that he is likely never to advance from the bottom rung. Louisa Krause is Rose, the black-garbed projectionist until digital comes to town and she is fated to be demoted back to the popcorn detail. Aaron Clifton Moten is newcomer Avery, a 20-year-old movie nerd hiding behind thick glasses with his polo shirt neatly buttoned as if it could afford protection. The workplace is The Flick, a rundown single-screen movie house in Worcester County, Massachusetts facing obsolescence and extinction. 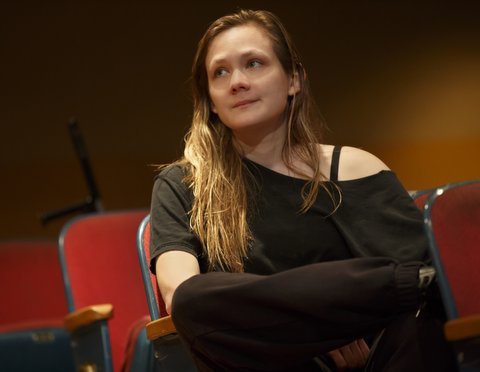 Each character lives in his or her own shell, with his or her own secrets. Baker manages to draw fully-realized beings while allowing only fleeting passages of personal information. These speeches -- Avery's at the end of the first act and in a solo phone monologue presumably with his shrink, Rose's as she tries to explain her contradictory nature, and especially Sam's breakdown of a confession -- belie the seemingly casual nature of the everyday grind. The actors seize their moments, and while I suppose others will play these roles in productions to come, I can't imagine truer -- or more wrenching -- performances than those of Maher, Krause and Moten.

Director Sam Gold, who since Circle Mirror Transformation in 2009 has served up several intriguing productions and who is a strong contender to pick up a Tony next month for Fun Home, is here at his most incisive and inventive best. Whether he helps Baker or whether she inspires him, they certainly do magical work together. Watch the dialogue exchange between Rose and Avery at the end of the first act. This comes after Rose's extravagantly primal mating dance, which petrifies the boy altogether (and with reason). Gold has Krause and Moten standing between the rows of movie seats, on opposite sides of the stage. They talk to, but away from, each other; hands are self-consciously crammed in pockets, all four of them. You sit there watching, wanting them to move together and connect so badly that you almost explode. Then they do move together, and they do explode. Later, watch Krause -- frozen upstage -- during Maher's extended breakdown. Stunning work from actors and director.

Baker, for her part, does a remarkable job of making something out of nothing. Or rather, what appears to be nothing. Being a canny playwright, though, that is surely her aim, and one she has executed powerfully and effectively in The Flick. 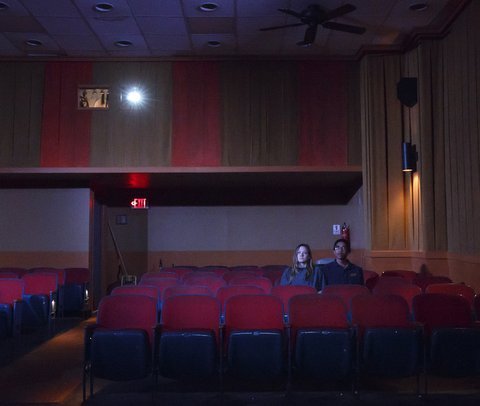 It is worth noting that the producing team of The Flick includes 17 of the 18 producers of Fish in the Dark. It's almost as if one of them emailed the others and suggested that since they were making so much money from the Larry David comedy, with its $497 premium tickets, they were honor-bound to underwrite something important. The Flick will hopefully do well during its four-month run at the 170-seat Barrow Street Theatre, but their grosses will certainly be chicken feed -- or, rather, popcorn kernels -- compared to the million-plus Larry David is bringing in weekly. How novel: commerce paying for art, with the theatergoer as beneficiary.

Annie Baker's The Flick opened May 18, 2015 and continues through August 30 at the Barrow Street Theatre