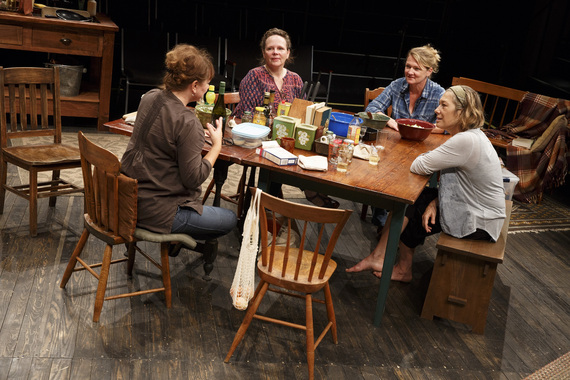 The Gabriel family of Rhinebeck, NY faces the unexpected in What Did You Expect?, the second part of Richard Nelson's real-time trilogy The Gabriels: Election Year in the Life of One Family. The clan of post-Roosevelt Democrats is wrapped up in the current election, which over the last weeks has become fraughter and fraughter.

(The action takes place on the late afternoon of September 16, 2016--i.e. yesterday, when the play opened at the Public Theater; Nelson has been rewriting as necessary during previews, and even includes rueful mention of Donald Trump's appearance with Jimmy Fallon on "The Tonight Show" on Thursday. The final installment opens on Tuesday November 8, which is to say Election Day, before the first polls close.)

The Gabriels are dealing with other problems as well. The family--lifelong residents of Rhinebeck, a village on the Hudson near the F.D.R. National Historic Site at Hyde Park and close by the Berkshire Mountains of Massachusetts--watch helplessly as their place in society erodes. Rhinebeck has become a town of rich weekenders from the city, "the new Hamptons" Nelson calls it, and they are left adrift. Yesterday's family meeting--which lucky Public Theater subscribers can witness, through October 9--starts in the same manner as the first play, Hungry; everybody chats while slicing vegetables for the evening meal. Sausage casserole, a Gabriel family tradition, is on the menu this time.

But the family's identity, in the form of the house they grew up in, is suddenly at risk. During the first scene, Mary (Maryann Plunkett, the third wife and widow of fictional playwright Thomas Gabriel, who died of Parkinson's over the winter) and Karen (Meg Gibson, the first wife of same) are poring over the deceased's handwritten notebooks and journals. Looking for items they can sell, it transpires. The house itself is at risk, due to one of those predatory mortgage scams that entrap the elderly. The very symbol of the Gabriels--a weathered upright Bechstein piano that the family all played, and which George (Jay O. Sanders) still gives lessons on to help pay the bills--is sacrificed while the Gabriel women set the table for dinner. 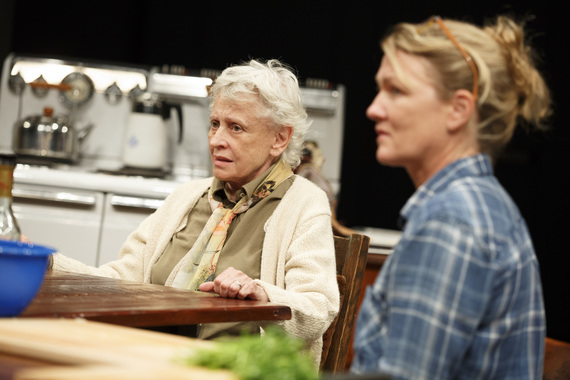 Roberta Maxwell and Lynn Hawley in What Did You Expect?
Photo: Joan Marcus

Also looking on are George's wife Hannah (Lynn Hawley) and the one Gabriel daughter, Joyce (Amy Warren). Wandering in and out of the proceedings, like a wraithlike Mary Tyrone who still knows how to shoot daggers at George and Joyce's weaknesses, is Roberta Maxwell as the matriarch Patricia. (It is disconcerting for those of us who remember Maxwell as Desdemona in the 1970 Othello--opposite Moses Gunn--and as the naked girl in the stable in the original Equus, to see her now playing an octogenarian.)

The central player in What Did You Expect?--and in Hungry, as well--is Ms. Plunkett as the widow. It's impossible to say whether this is the writing, or simply the power of the actor; presumably both, as Nelson is sculpting the trilogy around his cast. Plunkett and her husband Sanders, both of whom are astonishingly good, were also mainstays of Nelson's four Apple Family plays, which were presented at the Public from 2010 through 2013. The earlier plays took place and were produced a year apart; The Gabriels is compressed into the eight months culminating with the upcoming presidential election. While the six plays written thus far have all been masterful, the Gabriel plays might have an edge thanks to the lessons Nelson learned from the Apples. (The Apple Family: Scenes from Life in the Country has been published by tcg/Theatre Communications Group, and is richly recommended reading.) It should be pointed out that the entire cast remains excellent, and that Nelson has directed all the plays himself.

The main character--in the present play, at least--is the offstage Thomas Gabriel, the number one son whose death has served to pull the family together. The family leader, yes, but in this installment we begin to see strong resentment from the siblings he dominated in life. As his two wives rummage through his work papers and unrealized ideas, we get the impression that Nelson is writing about himself. The discussion of translations of classic plays seems to specifically describe the playwright's collaborations on The Cherry Orchard, The Inspector, and A Month in the Country. Nelson also has his characters discuss Thomas's proposed dramatization of Sholem Aleichem's 1911 novel "Wandering Star"--which, as it happens, was the initial springboard for the project that turned out to be Fiddler on the Roof.

The elephant in the kitchen, though, is Clinton v. Trump. (The Clintons are not exactly Rhinebeck locals, but they have ties to the area and several Gabriels have been in the room with Bill and Hillary.) The rich people of Rhinebeck are Clinton supporters, of course; but "when did the rich people become Democrats?" Hannah asks. More distressing is an exchange when one of these rich interlopers looked at George--a carpenter by trade, blue-collar, rough-hewn and being shunted aside by new money--and assumed that he must be a supporter of Trump. 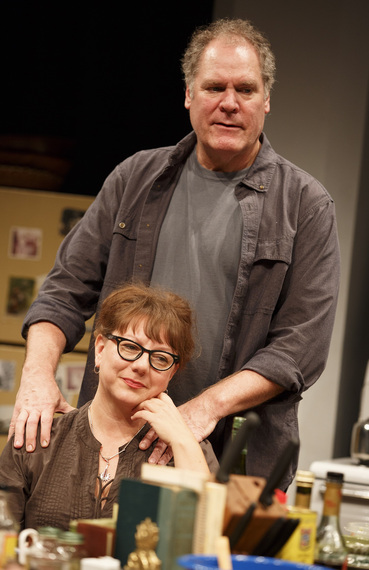 Amy Warren and Jay O. Sanders in What Did You Expect?
Photo: Joan Marcus

Nelson suggests that the Gabriels are as concerned about losing the election as they are about losing their home. Scary times, these; and likely to remain so until November, when one way or another we will be pushed into a new era.

.
Richard Nelson's What Did You Expect? opened September 16, 2016 and continues through October 9 at The Public Theater. The Public has also scheduled five marathon days presenting the three Gabriel plays, December 10 through 18