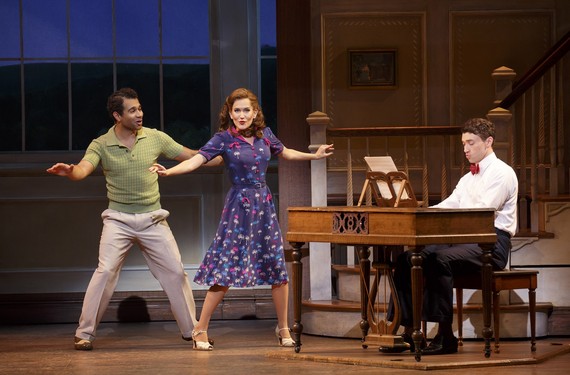 Eight holiday seasons ago, an accomplished group of Broadway pros led by Walter Bobbie and Randy Skinner took Irving Berlin's "White Christmas"--a tame, geriatric 1954 movie which starred Bing Crosby and Danny Kaye--and transformed it into a bright, friendly & entertaining-enough musical. This was trotted out under a novel formula, with Thanksgiving-to-New Year's runs in multiple cities, and seems to have done relatively well; it has also proved a valuable title in the licensing trade (i.e.: stock, amateur, and non-Broadway level productions).

We now have a second Irving Berlin movie-turned-musical, this one derived from the 1942 "Holiday Inn," which also starred Crosby (with Fred Astaire as his song-and-dance partner/rival). A decidedly better and more enjoyable film than "White Christmas," it is rather surprising to find that Holiday Inn--offered as the Roundabout's big fall musical--makes a decidedly weaker stage attraction.

The Roundabout was on a spree of exceptional theatre last season, with She Loves Me, The Robber Bridegroom, Noises Off and The Humans; so perhaps it is natural for there to be something of a letdown. (Unlike the aforementioned shows, which were homegrown by the Roundabout, Holiday Inn originated at Goodspeed Musicals.) This one turns out to be an unassuming and unchallenging musical, and an ineffectively assembled one at that. On the plus side, there are three very good dance numbers--one at the fifty-minute mark, the others in the second act--and some ingratiating performances. Audiences looking for something gentle, built on bouncy Berlin melodies, might well be pleased.

How do you go from a winning Astaire/ Berlin film to a bland stage musical, anyway? It is safe to say there is a falloff in performances; while the film was not notable for its screenplay, the star roles were crafted around Astaire and Crosby. The stage version has been filled out, as it were, but not helpfully. The libretto tries to improve the screenplay; without making an intensive comparison, it seems like the two love triangles (with the Astaire character trying to steal successive girlfriend/stage partners from Bing) have been toned down; certainly Lila (Megan Sikora), the first of the girlfriends, doesn't seem to have any romantic link to either Fred (Corbin Bleu) or Bing (Bryce Pinkham).

But that's not the main problem. Adaptors Gordon Greenberg (who also directed) and Chad Hodge have cashiered three of the film's songs and shoehorned in no less than ten others: some hits, along with several unknown items which Irving--never one to waste a good tune--himself relegated to the scrap pile. The result is that the story, which in the film dutifully plows ahead, halts again and again at Studio 54 while we get a handful of ballads that prolong the sleepy evening. 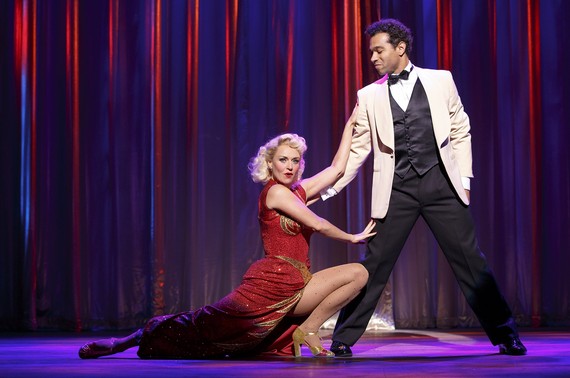 The good numbers, staged by Denis Jones (Honeymoon in Vegas), are fun enough to get excited about. The first, "Shaking the Blues Away" (from The Ziegfeld Follies of 1927), is altogether toe-tapping. Mr. Jones comes up with the notion of breaking out the Christmas decorations for the dance break. On come strings of electric lights, which are used as jump ropes; the results are as jolly and as highspirited as Susan Stroman's "Slap that Bass" number in Crazy for You. Mr. Bleu, who has more or less disappeared for most of the first act, opens the second with "You're Easy to Dance With." Naturally, Jones has him do the number with the eight chorus girls, switching from one to the other; but he gives each of the girls some real stepping to do, and Bleu does dazzlingly well with it, resulting in a number which makes us lean forward and take notice.

As the act dwindles down, the Fourth of July comes along in the guise of Fred Astaire's unforgettable firecracker number ("Let's Say It with Firecrackers"). Jones and Bleu pay homage to Fred, tapping explosive charges across the stage, and Holiday Inn comes vibrantly alive. For the one number, anyway, illustrating how good the entire show might have, or could have, been.

Pinkham (of A Gentlemen's Guide to Love & Murder) does a decent-enough job as the likable crooner who retires to a country inn, although he is left somewhat stranded with all those ballads. Bleu (of "High School Musical") makes an especially good showing, thanks to those dance numbers. Lora Lee Gayer (Dr. Zhivago) gives a nice performance as the nice girl (and appears to be wiser than the book gives her credit for). Ms. Sikora is rough-edged as the rough-edged Lila, with the book removing some of the "character" her character had on screen.

Megan Lawrence, memorable as the carrot-topped Gladys in the Harry Connick Pajama Game, appears in the newly-wrought role of the crusty country handyman (handywoman?); what you might call "the Patsy Kelly role." Lawrence garners most of the evening's laughs, even when the lines and business are not funny. The other laughs go mostly to Lee Wilkof as the Yiddish-infused, little-old-man booking agent. There is also an amusing and friendly performance by preteen Morgan Gao playing one of those nonsensical roles--is he a bank president?--that musical comedy bookwriters sometimes strain their wit to come up with. 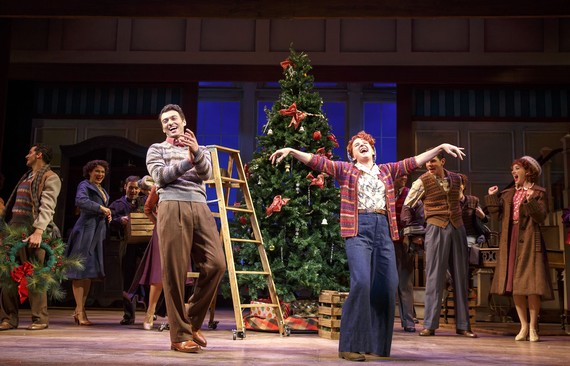 Audiences looking for a non-challenging, 100% old-fashioned musical might well have an altogether swell time at Holiday Inn. But the overall effect is dampened, as if everything but that firecracker number was staged with soggy powder.
.
Holiday Inn, The New Irving Berlin Musicalopened October 6, 2016 and continues through January 1, 2017 at Studio 54