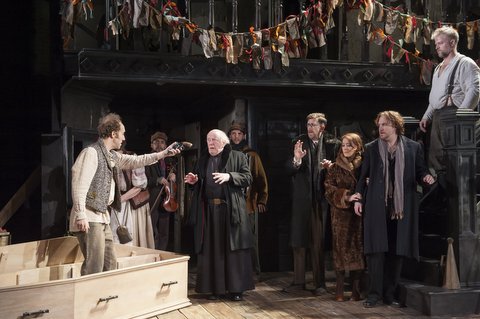 Joey Slotnick (in coffin) and the Cast of Dying for It. Photo: Ahron Foster

"Suicide is painless" goes that innocuous-but-satirical ditty written for the 1970 movie "M*A*S*H." Suicide was also painless in Nikolai Erdman's 1928 play The Suicide, but the satire was so severe that the Soviet authorities cancelled the production and sent the author off to Siberia. This despite, apparently, a plea from the great Stanislavsky to Stalin himself on Erdman's behalf. The Suicide was sent into a deep freeze so deep that it went unproduced in Russia until decades after the author's death. The Atlantic Theatre Company now gives us Moira Buffini's adaptation of The Suicide, at the Linda Gross Theater. Dying for It was initially produced by The Almeida Theatre in London in 2007.

Erdman's piece was an absurdist comedy, falling somewhere between Gogol's The Inspector General and Marx's "Duck Soup." (Not that Marx, but the subversive brothers from East 93rd Street--who in any event didn't make their film until Erdman was already in exile.) Semyon Semyonovich is a henpecked failure who decides to end it all. His neighbors are scandalized; this was 1928, when suicide wasn't quite so common as today.

Once accepting the notion, the locals realize that Semyonovich's death can support their own individual causes. A member of the intelligentsia sees him as a hero for the former elite; a free-spirited floozy wants him to die proclaiming his love for her; the priest thinks the suicide will drive people back to the church--and they each provide Semyonovich with suicide notes to that effect. In the end, the hapless hero doesn't commit suicide and in a farcical climax bursts out of his coffin.

This makes for an intriguing evening of ideas, and a dangerous one in 1928 since Semyonovich's complaints were not-too-obliquely aimed at the Soviet government. (The language is fairly direct in this adaptation, although it's impossible to know just how seditious Erdman was without reading the Russian original.) In any event, the play--which in its time was a dangerously-sharp satire--now has the danger removed, making it a farce of ideas. As such, it has its points but eventually runs out of comedic steam. The Atlantic's Dying for It is a play that you want to like and support, but after a while you reach the point where it starts to wear down.

Let it be added that Buffini--an English playwright whose recent Elizabeth II/Thatcher satire Handbagged was an Olivier Award-winning comic delight--has given us a far more engaging adaptation than the one that landed on Broadway in 1980 at the ANTA. That production, called The Suicide, featured Derek Jacobi--at the height of his stardom--as the hero, and is remembered by this viewer as somnolently lethargic. After seeing Dying for It, one concludes that Jacobi was severely miscast.

Joey Slotnick, in the present production, does better as Semyonovich. Even so, the 2007 London production of Dying for It apparently got an enormous lift from the actor in the role, which does not happen here. Jeanine Serralles as the wife, Mary Beth Piel as the mother-in-law, Peter Maloney as the priest, Mia Barron as a café owner and CJ Wilson as the thuggish boarder all offer amusing portrayals; the entire cast, in fact, does an admirable job. There is also a superbly decrepit set from Walt Spangler. But while the production under the direction of Neil Pepe offers numerous sparks, it never quite catches fire.

.
Dying for It, Moira Buffini's adaptation of The Suicide by Nikolai Erdman, opened January 8, 2015 and continues through January 18 at the Linda Gross Theater