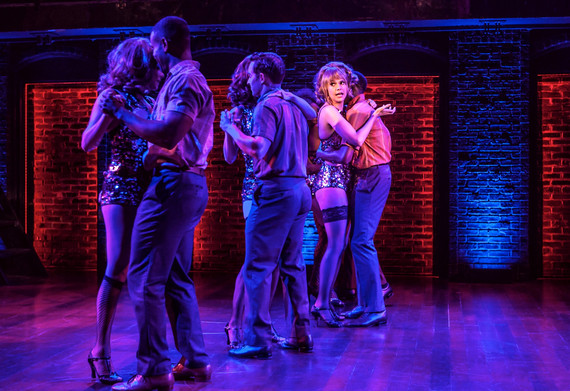 Sweet Charity--that big, brassy "Big Spender" musical created by Bob Fosse as he was leaving the world of standard musical comedy for something dark and macabre (i.e. Pippin and Chicago)--is back, in a pint-sized off-Broadway production which necessarily cuts down on brass (orchestral), neon and girls. Not, seemingly, a recipe for success; but this new Charity is built around an irrepressibly delectable Sutton Foster, who--with significant assistance from director Leigh Silverman (Violet)--gives the show a refreshingly different flavor and thoroughly wins the day.

Fosse's Sweet Charity has had a checkered life since it opened on Broadway in January 1966. We call it Fosse's Charity because while he is not the author, he is imprinted all over the material. And not only in dance language. He selected the property as a vehicle for his wife, Gwen Verdon; he selected the songwriters and producers; oversaw the adaptation; and he himself wrote the book, initially, using the pseudonym Bert Lewis (as in Robert Louis Fosse). Fosse then saw the wisdom of firing the librettist and placing the thing in the hands of Neil Simon, which made a significant difference. (Fosse, Simon and composer Cy Coleman had earlier collaborated on the 1962 musical, Little Me; Fosse and lyricist Dorothy Fields had a major 1959 hit with the flimsy Verdon-vehicle, Redhead.)

The original production did well enough, though overshadowed by that season's Man of La Mancha and Mame. But the not-infrequent revivals--including one staged by Fosse himself--have demonstrated the show's main problem. The incomparable Verdon was the dance hall hostess with a heart of gold; her character name is Charity Hope Valentine, and not accidentally. But while Charity is 'of the streets'--in the source material (Fellini's "Nights of Cabiria"), she is indeed a streetwalker rather than a somewhat ambiguous dance hall hostess--Verdon had a special, comical magic. This filtered the harshness, almost as if to say: Charity isn't really unsavory, that's Gwen up there. Later Charitys (including Debbie Allen, Ann Reinking, Donna McKechnie and Christina Applegate) have accentuated the toughness. If this hapless dance hall hostess isn't lovable and hopeful and as heartwarming as a valentine, the show can leave a grimy aftertaste.

It is unclear, at first, what to make of this new revival from the provocative off-Broadway company which calls itself The New Group. The opening is severely altered; instead of Charity singing a self-deprecating number ("You Should See Herself") to her boyfriend, who immediately thereafter steals her money and pushes her into the Central Park lake, this Charity sings it to four different boyfriends before being dunked. Things pick up--as they always do--with "Big Spender." But instead of it being a dance spectacular for the hostesses, it's more integrated here: Charity herself takes part in the number, and they incorporate male dance-hall patrons determinedly groping and clutching the girls. Rather than falling into the natural trap of trying to pay homage to Fosse, choreographer Joshua Bergasse (On the Town)--here and elsewhere--contributes dances that are more humorous than graphic. 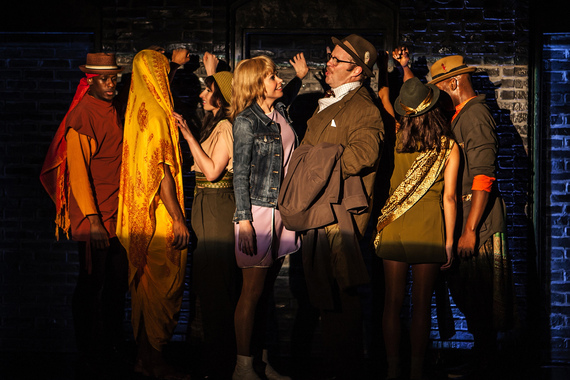 Then comes the next set piece, the 60's nightclub number which goes under the name "Rich Man's Frug." None of Fosse's grand, vulgar variations; rather, Bergasse gives us his rather small ensemble garbed in white, a clutch of snooty, dancing rich people (with little frug). Once Charity slips into the nightclub, we see what Foster, Silverman and Bergasse have in store for us. Foster joins the dance, yes; but unlike the justly celebrated Verdon, Foster's Charity does not dance. Rather, she tries to dance, with missed beats and knees akimbo; so instead of getting Fosse's sex-on-the-dance-floor showstopper, we have this ugly duckling foundering amidst a circle of haughtily towering dancers. As a result of which, "Rich Man's Frug" is not a production number for the preening ensemble; it's a comic number built around the social and physical awkwardness of our heroine.

We then move into the scene between Charity and the second-rate Italian movie star, Vittorio Vidale. Let us add that Joel Perez--the 'other man' in Fun Home--gives a bright and altogether delightful performance, playing four supporting male roles. When we get into his sleek penthouse with (as the artful Dorothy Fields put it) "a bedspread made from three kinds of fur," it suddenly hits us: this production of Charity has been conceived and staged not as a grand Fosse musical, but as a Neil Simon comedy. Which, in retrospect, it is. (When Fosse begged Simon to take over the show, Barefoot in the Park and The Odd Couple were Broadway's reigning comedy hits.)

Simon writes funny, as we know or at least those of us who have been around long enough know. Foster's varied talents include comedy, and she proves to be perfectly in tune with the material. The focus in this production becomes even clearer when Shuler Hensley comes on at the end of the first act as the shy and insecure accountant Oscar. One of the book's brightest ideas was to put the mismatched pair in a stuck elevator for a scene and song ("I'm the Bravest Individual"). With Foster and Hensley--who were previously paired in Young Frankenstein--this plays like gangbusters, or like a stretch of The Odd Couple, and the theatre patrons go out for intermission on a comic high.

And there you have it: this reconfigured Charity is a Neil Simon comedy with tunefully rhythmic songs, with a leading lady who sings her heart out--but who, unlike Fosse's muse Gwen Verdon--dances on the wrong beat with knees a-knockin'. So we not only have a likable and lovable heroine; the whole show is happier.

Foster is altogether superb; it almost feels like she's jumped back to Thoroughly Modern Millie, when she not only enchanted us but surprised us. Hensley is wonderful as the shy and neurotic actuary who falls in love with Charity's virginal (!) qualities, easily an equal to the understated John McMartin who was so very droll in the role. Watching Foster and Hensley playing the elevator scene and the second act coffee shop scene, one muses that they could indeed, maybe, play The Odd Couple.

Perez adds robust humor, a strong voice, and a welcoming presence as Charity's no-good beau Charlie (whose name is tattooed on her arm), the sweet-singing Italian movie star, "The Rhythm of Life"-spouting Daddy Brubeck and the hard-boiled dance hall owner Herman with that high, ringing tenor voice. It seems that whenever the pace lags or Foster is merely catching a breath, Perez is there to amuse us. (These roles were intended for--and to our knowledge--have always been played by four different actors.) Asmeret Ghebremichael and Emily Padgett make a happy pair as Charity's dance-hall friends Nickie and Helene (who, despite their cynicism, picture a rosy future in "Baby, Dream Your Dream"); and seven well-selected dancers keep the show breezing along. 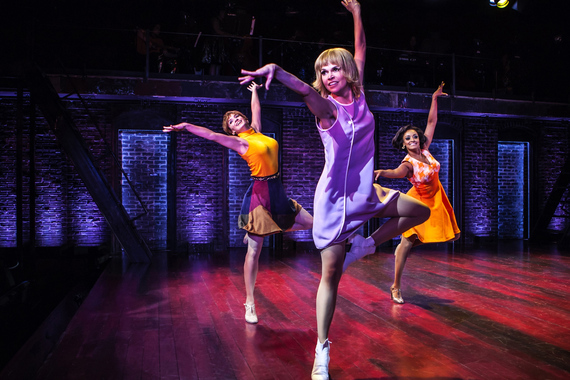 Derek McLane's scenery is minimal; the space is configured with risered seats surrounding a rectangular dance floor, and if you're lucky you'll get a spot--like this viewer did--where Foster is practically reclining in your very own lap. That said, McLane makes the most of the resources and contributes mightily to the proceedings, while costume designer Clint Ramos offers some perfectly suitable and perfectly ghastly '60s styles.

Some Broadway musical fans are likely to grumble about the reduction of Ralph Burns' vigorous orchestrations--in which you can almost smell the dance-hall sweat--to five measly players; and further complain that the big second act production number "I'm a Brass Band" feels denuded without a single trumpet or trombone growling away. On the contrary; if you must do Charity with five pieces, orchestrator Mary-Mitchell Campbell has found a most satisfactory way. It turns out that the primary orchestral flavor needed here is not a trumpet, but a growlingly-dirty saxophone. Georgia Stitt leads a ferocious all-girl ensemble placed on a platform above the action, and they truly rock.