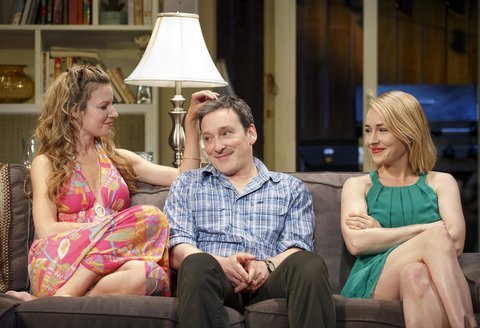 Bruce Norris, who has given us the award-winning Clybourne Park (about race relations) and the less-successful Domesticated (about the broken marriage of a philandering politician), turns to wife-swapping in The Qualms. Not wife-swapping exactly, as the mismatched octet Norris assembles includes only one couple that is actually married, but you get the idea.

For all the sex setup--there's a big bowl of colored condoms on the side table, which ends up unused but flung across the stage--the author apparently intends for the philosophical bantering among the participants to take the place of any actual action. They talk on and on about the nature of monogamy, sex, specific sex acts, sex with cows, and even the Hundred Years' War (go figure); but given all the possibilities, and Norris does indeed go into the statistical possibilities of sex among group participants, there is only one actual coupling.

This occurs offstage, among two female characters who are presumably intended to be the two most traditionally attractive cast members. (There is also the suggestion of other activity in the background, later on.) Norris, though, plays it safe; while there is a good deal of talk about the naturalness of bisexuality, he avoids suggesting that anything will happen tonight between the men.

The Qualms, like the author's aforementioned plays, originated last July at Steppenwolf. Pam MacKinnon--whose credits include Clybourne Park and the recent Broadway revivals of Who's Afraid of Virginia Woolf?, A Delicate Balance and The Heidi Chronicles--once again directs, as she did in Chicago. The Playwrights Horizons production is not a transfer, though; the cast--with one exception--is new, although the central couple is played by Jeremy Shamos and Sarah Goldberg, both of whom were prominent in Clybourne Park.

Shamos is especially good as Chris, the newby swinger who is decidedly out-of-place. (Shamos is becoming a familiar face, both on stage and screen; he recently played the annoying actor who was sandbagged in "Birdman" and replaced by Edward Norton.) Norris has Chris deal with his increasing discomfort with inherent politeness, until he reaches the breaking point; then, the embattled character lashes out truths that shatter the attitudes of the group and turn matters violent. The flashpoint comes when Deb--the significantly overweight member of the orgy--offers to "rock" Chris "like a hurricane" and he blurts out that he won't have sex with her because of her looks. The hard-as-nails, trash-talking gal runs off crying. 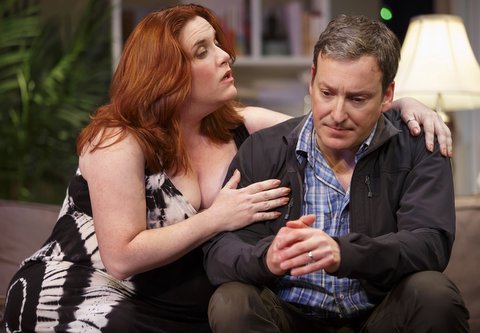 Donna Lynne Champlin and Jeremy Shamos in The Qualms. Photo: Joan Marcus
Rude and not politically correct, but obvious and all too understandable. In fact, from the moment the final four participants start to enter--the play begins with Chris and his wife Kristy chatting nervously with the relatively presentable host couple--one gets a sneaking suspicion that Norris is setting us up. Yes, of course there is a "fat" girl that our hero will inevitably get stuck with; there is also a fellow who "looks" gay. He keeps accusing Chris of casting aspersions, but the role is written in an unambiguously suggestive manner. What's more, the character has been cast and directed so that the audience is programmed to make the same assumption.

Which takes us to the root problem of The Qualms. Norris tries to be provocative, but there is the continual feeling that he is manipulating us. The fat girl is obviously unattractive, at least to Chris; the non-gay guy is obviously questionable. (He is described in the stage directions as "in his twenties, black, dancer-ish, model-handsome, aloof.") Norris wants us to be taken aback when Chris attacks; but the playwright is the one who uses stereotypes to all-too-visibly push poor Chris into the corner. Thus, the friction is not so real as it is presumably meant to be.

Any number of times during the play, one wonders why this character would even be there. Norris offers the excuse that Chris caught his wife having lunch with an ex-boyfriend, and is so jealous that he takes her to have sex with a group of strangers. Hunh??? Chris is as out-of-place as the $150 bottle of cabernet he has brought for the heathenish group, who turn up their collective noses in favor of mohitos and caipharinas. There are a few places where Chris would and could apologetically write it off as a mistake and simply leave. But he doesn't, for that would leave Mr. Norris without a play.

Let it be said that Goldberg, at least, makes her character believable; while her husband might feel out of place, Krissy is primed and ready to indulge in the orgy. Also standing out, as the hostess Teri, is Kate Arrington. She is the one Steppenwolf member who recreates her role. Listening to her extended, run-on speech describing her path from pregnant teenager downhill to suburban swinger, one can instantly understand why Norris and MacKinnon brought her along: Arrington makes this speech funny, touching and believably real. The rest of the cast makes do with the material, with little help from the speeches the author puts in their scripts.