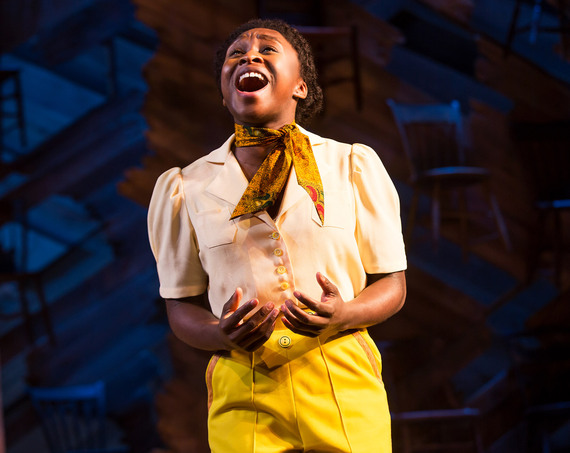 Cynthia Erivo in The Color Purple. Photo: Matthew Murphy
In one of the more notable turnarounds in recent Broadway history, The Color Purple--which many viewers found self-deflated and uninvolving when it premiered in 2005--reveals itself upon its return (via London) as a stunning, exhilarating and altogether joyful theatrical experience. Chalk it up to conceptual point-of-view, I guess, along with a handful of supremely satisfying performances.

Based on the Pulitzer Prize-winning 1982 novel by Alice Walker and Steven Spielberg's acclaimed 1985 film version, the original production seemed to see itself as something of a monumental epic; the show was mounted on a large scale, not only physically but musically. The 2005 Color Purple seemed to be so self-important that while some of the performers came across, the characters did not; the book seemed meandering; and the score, the quality of which carries the triumphant show now at the Jacobs, thoroughly failed to impress. The original Broadway production had a decent run, topping 900 performances, and is said to have recouped its costs; but the most exciting element of that affair, arguably, came from a cast replacement midway through the run.

Enter John Doyle, director of minimalist musicals including Tony-winning, actors-as-orchestra revivals of Sondheim's Sweeney Todd and Company. Doyle's process of stripping material down to its essentials and foregoing scenery doesn't work for every musical he has tackled, no. It sure works here, though, revealing a beating, pulsing heart within the show that was decidedly missing back in 2005.

This production premiered in the summer of 2013 in London at the Menier Chocolate Factory, which has already sent Broadway its revivals of La Cage aux Folles, A Little Night Music and Sunday in the Park with George. The Color Purple is the finest of them. (Currently on stage at the former factory on Southwark Street: a revised version of the Jule Styne-Bob Merrill Funny Girl, already set to transfer to the Savoy in April.)

Doyle does not make use of actor-musicians here; there is an eight-piece band playing vibrant new orchestrations by Joseph Joubert and conducted by Jason Michael Webb. In this case, eight is far more effective than the original eighteen. Doyle's physical production--he is credited for the set design--consists mainly of a back wall of wooden chairs. There are about fifty chairs all told, and in Doyle's scheme they are all-purpose. Color, and plenty of it, is provided by costume designer Ann Hould-Ward; the stage--which is suitably drab for most of the first act, given the nature of the story--explodes when leading lady Celie goes into the made-to-order trouser business. (Doyle--with or without Hould-Ward--gives us a brilliantly colorful picture earlier in the first Africa sequence, using four bed-sheet-sized pieces of cloth.) 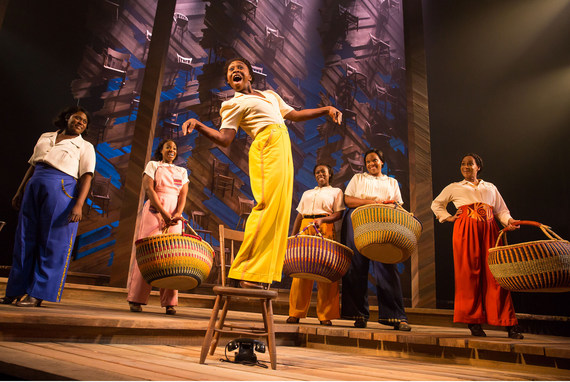 Cynthia Erivo (center) in The Color Purple. Photo: Matthew Murphy
While this is a remounting of the Menier production, there seem to be few holdovers from the London production aside from Doyle, his lighting and sound designers, and--most critically--a young British actress named Cynthia Erivo whose major credit at the time was as the lead in the 2011 UK tour of Sister Act. (Whoopi Goldberg originated Erivo's two roles in the original film versions of Sister Act and The Color Purple.)

Erivo does brilliantly well as Celie, the abused child-bride who overcomes slavery-like conditions to become an assertive, accomplished heroine. (While LaChanze received a Tony Award for the role back in 2005, Erivo's performance is considerably more powerful and decidedly contributes to the strength of the revival.) She is supported, and joined in the spotlight, by two other Broadway first-timers. Jennifer Hudson (as the temptress Shug Avery) is no stranger to audiences, having won an Oscar for her Effie in "Dreamgirls"; Danielle Brooks (as the tower-of-strength called Sofia) comes from television, where she appears as Tasha "Taystee" Jefferson in "Orange Is the New Black." Both offer wonderful performances; all three of them--along with Joaquina Kalukango as Nettie, Celie's sister--sing the blazes out of the score.

Isaiah Johnson (of Far from Heaven and the Pacino Merchant of Venice) plays the malevolent husband Mister, while Kyle Scatliffe--who has a Best Actor Olivier nomination for his portrayal of Haywood Patterson in the Young Vic production of The Scottsboro Boys--rounds out the featured players with a strong performance as Harpo. Also standing out among the cast of seventeen are Carrie Compere, Bre Jackson and Rema Webb as a trio of gossiping biddies.

The most important contributions--and, under the circumstances, the most surprising--come from songwriters Brenda Russell, Allie Willis & Stephen Bray and librettist Marsha Norman. Surprising because the quartet received relatively little praise in 2005. Given the strength of the score as performed at the Jacobs--including a veritable parade of top-flight numbers--one concludes that the music was simply overpowered at the Broadway ten years ago. That is, it sounded like a studio-produced pop score back then; in Doyle's version, the songs turn out to be highly theatrical and thus grab (instead of assault) the listener. Extra praise should go to Ms. Norman, who has apparently allowed and encouraged Doyle to cut a significant amount of dialogue. With less words, the emotional core of her book is exposed and far more effective. 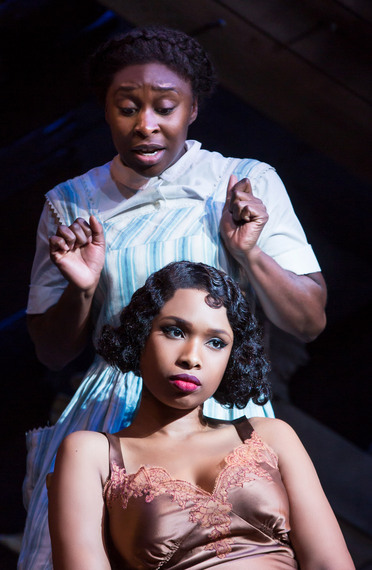 Cynthia Erivo and Jennifer Hudson in The Color Purple. Photo: Matthew Murphy
The original production was a minor cog in the 2005-2006 Broadway season, which was dominated by Jersey Boys, The Drowsy Chaperone and Doyle's production of Sweeney Todd. Midway through the 2015-16 season, though, The Color Purple is already a highlight. Theatergoers who weren't impressed the first time are hereby advised to give the show a second chance, as you're likely to end up cheering.
.
The Color Purple opened December 10, 2015 at the Bernard B. Jacobs Theatre