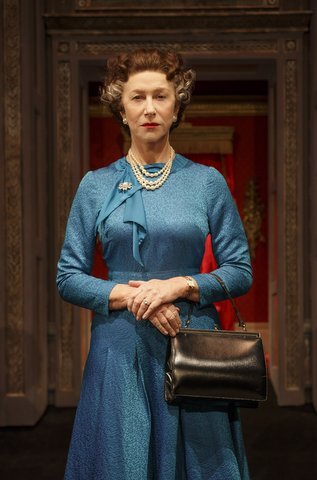 Helen Mirren in Peter Morgan's The Audience. Photo: Joan Marcus
Take a revered, honored and accomplished actress (Dame Helen Mirren) and put her in a new play which reprises a character that won her a Best Actress Oscar in 2006 (as Elizabeth in "The Queen"). And not a mere ripoff. Put it in the hands of Peter Morgan, who wrote "The Queen," and whose theatrical bonafides include the astonishingly good Frost/Nixon; and director Stephen Daldry, of the stunning 1992 revival of An Inspector Calls and the international musical hit Billy Elliott. There are enough fans of Mirren, and H.R.H., and Anglophile television, to attract S.R.O. audiences in the West End and on Broadway for as long as the star wishes to wear the crown.

"Snapshots from The Queen," you might call it; in this case, it is more like a scrapbook. "The Queen" was set in one year of Elizabeth's reign, 1977, when she was dealing with the death of Princess Diana; Morgan's The Audience centers on sixty years-worth of Elizabeth's weekly audiences with her Prime Ministers (eight of whom are represented, starting with Winston Churchill and ending with the current David Cameron). And there's the rub. While most theatergoers are likely to be thrilled by The Audience--or more precisely, by Mirren's performance in The Audience--the concept dictates that we will be seeing pages from a scrapbook, without the dramatic heft that would make it a fine and/or important play.

Yes, there is great life for The Audience with Helen Mirren; but the script itself seems to be merely an element of the evening devised to support the star performance, in the same manner as Bob Crowley's sets and costumes and Ivana Primorac's hair and make-up. Consider The Audience without the participation of Helen Mirren; while other stars are likely to try it--Kristin Scott Thomas is scheduled to do the play at London's Apollo next month--the appeal, here, is watching the star of "The Queen" playing The Queen live and in person. Compare this to Frost/Nixon; while original stars Sheen and Langella were unforgettable in the roles, the play is more than strong enough to work with any number of actors.

The Audience gives us Ms. Mirren--and she is wonderful, thank you. Her performance is more than enough to carry the day, and carry the play, to surefire success; while Elizabeth The Queen has her supporters and her detractors, Mirren's canny and well-rounded performance is sure to garner unanimous huzzahs.

The format is simple enough. The Equerry--a combination butler/narrator--sets the scene; Geoffrey Beevers, one of the four actors imported with Mirren from London, has a droll and authoritative, raised-eyebrow manner which keeps the evening moving. One is slightly surprised that he doesn't start the affair with one of those "the action starts in 1936, before the age of cell phones, so please do toggle yours off" speeches. We then see Elizabeth with one of her more familiar prime ministers, John Major (a somewhat restrained and not-quite-comfortable Dylan Baker). Major exits; Equerry makes a little speech; a team of ladies-in-waiting help Mirren through an impressive, onstage costume change that trims forty-three years; and we see the silhouette of her first prime minister, Winston Churchill. Daldry gives Dakin Matthews a grand reveal, almost as if the silhouette of Alfred Hitchcock sprang to life. (This was presumably effective in not-so-merry olde England, but at the press preview attended it was clear that a major portion of the patrons had no idea who this Mr. Churchill was.)

That's the framework. Between ministers, Mirren has costume and wig changes; some onstage, some off, and some rather remarkable--but there's something faulty when one of the major highlights of an entertainment are the costume changes. (The most memorable element of the recent musical Cinderella, alas, was a costume change--which kept people talking but was indicative of the lackluster show itself.) Morgan also gives us a running character he calls "Young Elizabeth"--played at the performance attended by Sadie Sink, who alternates in the role with Elizabeth Teeter--who talks to one servant or other (and eventually her elder self) about how she would rather be able to go outside and play like all the other girls and boys.

The "imaginary conversations from history" nature of things is interrupted by the appearance of Harold Wilson, the Labour minister who served from 1964-70 and 1974-76. Wilson has an awkward, bull-in-the-china-shop scene in the first act, and a highly amusing scene with the queen in Scotland, in which he describes the Queen's Balmoral Castle as a "Rheinland Schloss." (He continually kids the Regent about her family's Germanic heritage.) The play ends with a third Wilson encounter, this one moving and emotionally affecting. 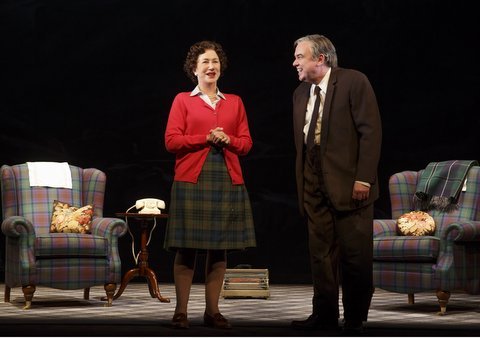 Helen Mirren and Richard McCabe at Balmoral Castle
in Peter Morgan's The Audience. Photo: Joan Marcus
I can't say whether the Wilson scenes are better than the rest of the play because of the actor, Richard McCabe; or whether Mr. McCabe, who won the Olivier Award for this performance (as did Mirren), sparks the play alive because of the writing. In any event, Wilson is the only Minister up there created as more than a revue sketch. In fact, Elizabeth and Wilson--as drawn by Morgan--could populate their own play, and it might well be as compelling as Frost/Nixon.

Mr. McCabe is a treat to watch. So, to a lesser extent, is Michael Elwyn as Anthony Eden. His participation is restricted to one, short scene; but it offers high stakes writing, centering on the Suez crisis of 1956, which tarnished the United Kingdom's place in the postwar world and caused Eden's resignation in disgrace. The Suez scene, following Balmoral and followed by the Margaret Thatcher sequence, makes the second act far more involving than the first. This despite the fact that Judith Ivey, who storms on like a Texan Thatcher, seems somewhat out of place (although this might be a question of the writing).