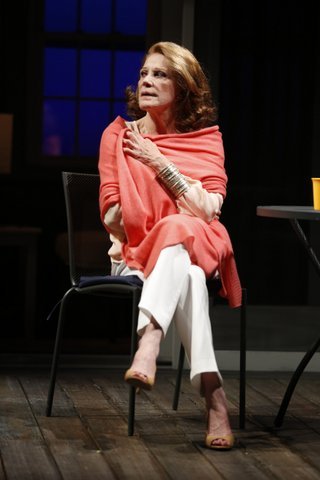 Linda Lavin in TOO MUCH SUN. Photo Credit: Carol Rosegg

Playwright Nicky Silver, director Mark Brokaw, and living legend Linda Lavin have returned to the Vineyard Theatre, launching-ground of their 2011 comedy The Lyons, for another go at it. This time, though, Silver -- author of Pterodactyls, The Food Chain, and a long list of comedies -- hasn't provided much of a play. Too Much Sun, not enough laughs, and not much food for thought either.

The plays starts with Lavin in an orangey-gold outfit on an orangey-gold set playing Medea in Chicago. Lavin gets a bunch of laughs as she muddles through Euripides, looking like a Charles Busch vision of a bargain-basement Klimt. It turns out that this is play-within-a-play; our Linda is an aging Great Lady of the Theatre staggering through a dress/tech rehearsal with such difficulty that she walks out of the show and escapes to the seaside summer home of her grown daughter.

Said daughter Kitty (a game Jennifer Westfeldt) is estranged, of course, and has a whole Whole Foods tote-bag full of Mommy issues. And an out-of-sorts husband with a beard called Dennis (Ken Barnett), who is unfulfilled by his job as an adman and restless. And a gay, teenaged drug-dealer called Lucas (Matt Dickson) who lives next door and takes the husband to a clump of driftwood on the beach, takes off his shirt for a swim, jumps in and out of the water--with no towel but totally dry -- and plays a scene with the husband that you could see coming from the distant shore.

The neighbor boy's father Winston (Richard Bekins) is a wealthy widower -- and I suppose you've already figured out what happens between him and the famous, eccentric, broke actress. There is also a twenty-something fellow (Matt Dellapina) putzing around, an office assistant sent by Lavin's agent to retrieve his recalcitrant star; when Lavin refuses to budge, this office assistant somehow or other manages to remain in the daughter's house all summer. (How many office assistants are sent to the shore for months to babysit AWOL clients?)

You can easily guess what happens between the assistant and the daughter while the husband and the teenager are combing the beach and counting the terns overhead, and how bliss-filled Audrey -- a true Medea of a mother -- is about the upcoming blessed event. I doubt, though, that even the most talented plot-forecaster will foresee that one of the characters is an aspiring rabbi who winds up singing the Sh'ma at the funeral. Just imagine how many stray laughs that contributes.

The story holds few surprises, and neither the characters, the performers, nor the badinage offer much compensation. Chalk it up to an off night for Mr. Silver and Mr. Brokaw (of How I Learned to Drive and the current Cinderella). Even Ms. Lavin, who has been known to make an awful lot out of very little, can't do much with nothing. She does get to sing the Weill-Brecht "Surabaya Johnny" in the second act, in the original German. Go figure. Maybe it's simply too much sun?

Too Much Sun, by Nicky Silver, opened May 18, 2014 at the Vineyard Theatre