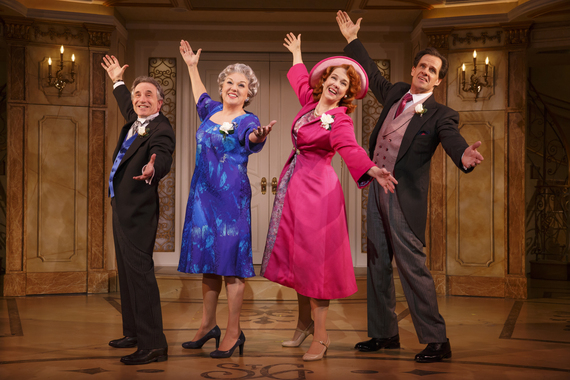 Chip Zien, Tyne Daly, Harriet Harris, and Michael X. Martin
in It Shoulda Been You. Photo: Joan Marcus
Something old, something new
Something borrowed, something blue-ish

If you can predict that "blue-ish"--in the new musical, It Shoulda Been You--rhymes with something like "it's true-ish when you're Jewish," then you're two (or five) steps ahead of the authors. If it's Jewish jokes you want, there's a truckload of them onstage at the Atkinson. If you don't want Jewish jokes, there's a truckload of them at the Atkinson.

Viewing the 2011 tryout at the George Street Playhouse in New Brunswick (N.J.), I found the humor mirthlessly forced. ("It would have been a scream back in 1965," I wrote). 30 months later, I'm here to report that It Shoulda Been You is now considerably better than it was. This, thanks to a general upgrading of the cast (other than four central actors); slicker, fast-farce work from director David Hyde Pierce; and what seem to be many more jokes. Weaknesses still remain, led by the contrived story and a decidedly non-rousing score, but what was well-nigh intolerable in New Jersey is now... well, tolerable.

The story harkens back to Abie's Irish Rose, which was already hoary when Anne Nichols wrote it back in 1922. Jewish boy weds Irish Catholic girl, with the parents and everyone battling away. The critics loathed it, but it ran five years and became Broadway's longest running play; 93 years later, Abie somehow remains in the number three slot.

This time the girl is Jewish and the boy is a WASP. That is, the girl's family is very Jewish and the boy's family is very WASPish; the newlyweds themselves seem to have been raised in central casting. Barbara Anselmi, making her Broadway debut, wrote the music and is responsible for what is credited as the "concept"; Brian Hargrove, a television writer, provided book and lyrics. (Let it be added that six of the seventeen songs come from five additional lyricists, although none of the lyrics stand out from the rest.) One suspects that the presence of Hargrove's husband as director helped get the show off the ground in the first place; Mr. Hyde Pierce's direction, as it turns out, helps keep the proceedings happily and dizzily airborne.

The show is built around the two mothers, hers being a harridanish Tyne Daly and his being a dipsomaniacal Harriet Harris. As you might imagine, Daly and Harris are capable of making limp lines soar, and they do quite a job of it. The central character is an impressive Lisa Howard, as the wallflower sister of the bride. The show breaks from the Abie's Irish Rose mold--and I mean mold in both its familiar meanings--by offering a surprising, modern-day twist; or at least, a twist that would have been modern in 1979. Even so, it draws a gasp from the audience and helps propel the action.

Joining Daly, Harris and Howard from the New Jersey cast is Edward Hibbert as the sharp-tongued wedding planner, demonstrating his skill at ennobling less-than-scintillating dialogue. The other nine players are new to the piece, and most contribute mightily. Chip Zien and Michael X. Martin play the fathers, who--given the casting of Daly and Harris as their spouses--have a hard time getting a word in (although Zien can do wonders with an eyebrow). Adam Heller and Anne L. Nathan double as relatives--very Jewish relatives--and waiters.

Sierra Boggess, that darlin' Little Mermaid, does a lovely job as the bride. It must be said, though, that she doesn't look, sound or act like is she is related to Daly, Zien, Howard, Heller and/or Nathan. David Burtka (as the groom), and Nick Spangler and Montego Glover (as intimate friends of the newlyweds), give somewhat restrained performances. The secret twist in the plot, presumably, hampers their characterizations until after the proverbial cat is out of the closet. 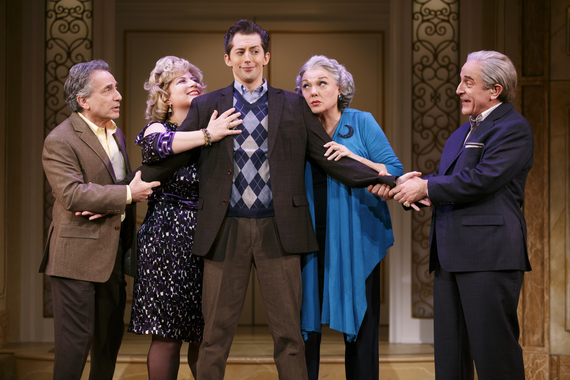 Chip Zien, Anne L. Nathan, Josh Grisetti, Tyne Daly and Adam Heller
in It Shoulda Been You. Photo: Joan Marcus
The finest element of the evening is Josh Grisetti, as the ex-boyfriend of the bride. He arrives late, jumpstarting the plot with a trick entrance, and providing hilarity whenever he reappears. He is also the only member of the company able to make his character seem human. Grisetti, who made a strong impression in the York Theater's 2008 musical Enter Laughing, has only now reached Broadway and he more than lives up to his potential. There are times during the intermissionless hundred-minute evening, in fact, when things would have grown mighty dire without the expert ministrations of Mr. Grisetti and Ms. Harris.

That is, for those audience members who find the entertainment level low. Let it be reported that standing on line to enter The King & I two days later, I overheard the fellow behind me--a 40ish, decidedly non-Jewish Californian (?) with streaked-and-coiffed blond hair--tell his companions that he saw It Shoulda Been You last night and they had to go. "I laughed my head off," said he, and he clearly isn't alone. There seems to be a sizable audience for this sort of thing, although it's hard to say if it's large enough. You will remember, though, that Jackie Mason used to draw "laugh your head off" crowds to this same Brooks Atkinson Theatre by the thousands. I never got much enjoyment from Mr. Mason, myself; for that matter, I imagine that old man Atkinson wouldn't exactly kvell over It Shoulda Been You.
.
It Shoulda Been You opened April 14, 2015 at the Brooks Atkinson Theatre