The good news from the Supreme Court of Canada is spreading quickly through the rainforest communities in eastern Ecuador, along the dirt roads and over the local radio stations. For more than two decades, 30,000 poor farmers there have campaigned for environmental justice against the Chevron corporation, which they accuse of polluting vast stretches of their territory. On September 4, Canada's high court ruled unanimously that the Ecuadoreans can put the American oil giant on trial in Toronto, in an effort to seize $9.5 billion in damages from its Canadian subsidiary.

The upcoming trial in Toronto will sharply change the momentum in an epic, complicated legal struggle that has already spanned several countries on three continents. Back in 2013, Chevron lost the final battle in a marathon case in the Ecuadorean courts, and the corporation was ordered to pay to clean up the extensive water and soil pollution that Chevron's predecessor, Texaco, had left behind. But Chevron had already sold all its remaining assets in Ecuador. The corporation refused to pay, and so the Ecuadoreans have been forced to pursue the debt in Canada and other countries. 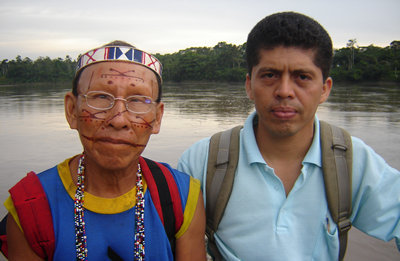 Photo: Pablo Fajardo (right) with a man from the Cofan group.
Pablo Fajardo, the 42-year-old lead attorney for the 30,000 plaintiffs, grew up in the contaminated region and still lives there part of the time. In a telephone interview from Lago Agrio, the largest town, he called the Canadian decision "a great triumph," in part because "Canada's court system is one of the most transparent in the world." He continued: "Chevron spent millions to bring their case in Canada. We won even though we had few resources, and few lawyers on our side."

But, he cautioned: "No one here is celebrating anything. There is happiness, because we have more hope, but we are conscious that Chevron is very powerful and we have a lot more work ahead of us to win this long battle."

The verdict in Canada, a 7-0 decision, ends a several-year-long winning streak for Chevron. The oil corporation had successfully counter-charged a group of the Ecuadorean plaintiffs and their lawyers in a New York Federal court under the notorious RICO Act for "racketeering" and "fraud;" the defendants included Pablo Fajardo and the Ecuadoreans' American lawyer, Steven Donziger. In 2014, after a controversial trial without a jury, Judge Lewis Kaplan found in favor of Chevron, but that case is now before a U.S. Appeals Court.

The Ecuadoreans' global campaign for justice is a battle for public opinion as well as legal action. The prospect of a widely publicized trial in Canada, where Chevron has an estimated $15 billion in assets, along with collateral coverage in the United States, must give the oil giant's strategists cause for worry. The mainstream U.S. press has either ignored the case or leaned toward Chevron, but that could change now that the corporation has suffered a setback. The Ecuadoreans will be represented by Alan Lenczner, one of the most prominent trial attorneys in Canada.

Amazon Watch, the U.S.-based environmentalist organization that has campaigned alongside the Ecuadorean plaintiffs since the 1990s, warned Chevron that investors may start to lose patience, as the case continues to drag on even though the oil giant has already spent by some estimates $2 billion to contest it. In a statement, Amazon Watch said, "The verdict should be a major wake-up call to Chevron shareholders and senior management that despite spending billions to make this issue go away, the company faces major risk to its assets and brand in Canada and beyond."

The Canada court decision also has broader implications worldwide. If the 30,000 Ecuadorean farmers do win in the end, they will have set an inspiring example, showing that environmental justice across borders is possible even against a colossus like Chevron.

Donald Moncayo is a member of the Amazon Defense Coalition, the huge popular organization that represents the rainforest residents. Over the phone from Ecuador, he said that 50 to 60 Coalition leaders met on September 11-12 to be fully briefed on the encouraging news from Canada, after which they provided details to their patient membership. During the long fight for environmental justice, Ecuadorean campaigners have shown up at the various trials and at Chevron annual meetings, and the prospect of brightly clad people from the rainforest marching outside a Toronto courtroom will add to the oil corporation's upcoming public relations headache.

Moncayo is also the man who leads the now well-known "toxi-tours" through the polluted zone, in which he points out some of the nearly one thousand waste pits where you can still see oily residue floating on the water and soaked into the soil. He says he continues to meet increasing numbers of people in his home region who are falling ill and dying from cancer. (The Ecuadorean plaintiffs cite five peer-reviewed scientific studies that show an increased incidence of cancer and other health risks in their area; Chevron paid for its own peer-reviewed study, which said there was no such higher risk.)

He continues to emphasize that if the rainforest residents do finally prevail, none of them will receive individual checks. He says the funds for damages will be used collectively, to clean up the water and soil and to construct a proper hospital for cancer patients.

Like attorney Pablo Fajardo, Donald Moncayo is hopeful but not celebratory. He notes that he and his neighbors have been struggling against what he calls "environmental crimes" for more than two decades, and he says simply, "Inequality is tenacious."