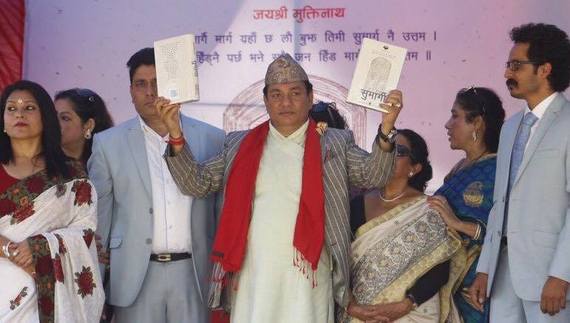 All Road to head to home but you have to know where is your home?

We have to know before we start our returning to home or any destination we aim to. I felt same thing while I read a new book AjeayRaj Sumargi presented by duo Nirmalkumar Thapa & Arunraj Sumargi.

I was in lost to catch the moon even I was passing by fullmoon, missed to see the sky and missed to see seer beauty of silver moon by naked eyes. I realized myself, my weaknesses and flavors of happiness to read Sumargi journey from there to here.

Sometime I feel im in lucid dream and an messenger of God whispering by smooth-tongue. Hard figure out those symbols but I was very glad to read entire book. Reading good book is like good food, it quenches your thrust and heals your heart to fulfill your deep wish. Sumargi is a book of life changing to have dreams to do in limited life span; it helps to start up everyone for the better future which mean focus on present doing.

Book tells unsung hero's stories, both writers craftily placed their thoughts, expression in lyrical way. Long time ago, Ajeya's father Late MadhavRaj Sumargi was a founder of Kalatmak Kastha Uddhyog, purpose to spread Nepali wooden carving arts reach in western civilization. Of course to craft wood is not an easy job, same writing this book is like a piece of handicraft. In cover book has door sketch, which was an art form of original art piece of own Kastha Udhyog then in Hetauda. Door pointing to the ways of successful life, open door letting people in to explore the right path. Each individual being has own path to make own life better so the book dealt on authentic life story from many mouths and characters.

AjeyaRaj has a magnetic quality; he pulls everyone easily, everybody shown love to him unconditionally. Former Prime Minister of Nepal Kirtinidhi Bista was one among other characters in book. He expressed valuable life affirmation tips to interested ones. Ajeya's parents are clos to PM Bista then and still after many years Ajeya's respect is same. That's how senior people to grassroot people fall in love with Ajeya. Same thing happens in business too. He know how to play game or lets say he know what is the result or reward once you walk in the path of truth and honest sure a day will come when you deserve to grab pious return without ay expectation. 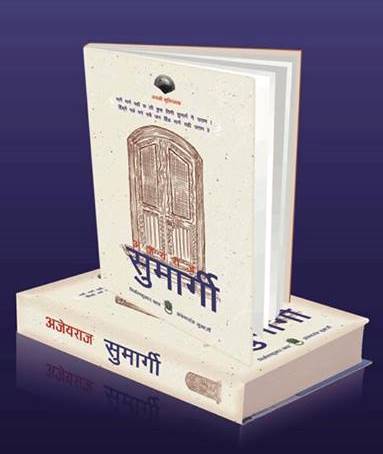 Gan Singh Sardar an old man with young heart aged 90 above who still longing the love affair with Ajeya. Gan Singh meet Ajeya at the age of 13th and he found same guy after forty years later, even more thicker than childhood, like his age and time Ajeya matured to respect and send love to me, he murmured. Sitting in the chair under morning sun. Gan Singh a former army veteran, born in Pakistan and served youth days in British Service and later Indian army happened to enter Nepal 50 years ago via Biratnagar, Birgunj. He liked the place Hetauda and spent 45 years and still same and affection resides in his heart. Singh was a very intimate to Rupchanrda Bista and his younger brother Gunachandra Bista. So ajeya's sitting with Gan is like picking stigmas unlcking the wisdom by the line of Urdu literature and half awaken insight from the poetic dishes of great composer Iqbal.

Brotehr ArunRaj Sumargi is himself a younger brother of Ajeya and co-author himself of book, expressesd his experiences and recalling childhood days in melancholic way. Mother Bishwokanti Kalawoti had a strong and influential name during the Punchayt regime, she fight for the right of helpless women and aware everyone for education. Later joined Thaha Movement with Rupchandra Bista, light the advise of father Kalanath Adhikari. Sister Anita and Ajita's precious thouhgts makes significant mark in book. Wife Ashmita brought internal packets of struggle days in Hetauda, Kathmandu and sharing her voyage to the world. Chemistry of love and ageless relationship possible when a big tree welcomed for nest to small homeless birds, open heart to passer by for the fresh air so they can attain their goal. Ajeya appear on that way even by the eyes of wife ashmita who is more like shadow of tears and smile from decades.

Thaha rebells Ramnarayan Bidari, Shiva Rana and others in book. A man's thought how became a people's common thought and flamed like wild fire in Nepali hills Palung to Kathmandu valley, east to west. Rudane was pioneer one who founded own political agendas and started own school of thoughts. Ajeya was frotuane yough chap who flamed by the fire of Rupchanrda, walked by the side of Dr. KI Singh, got wisdom from Gan Singh, earned friend like Tek Naryan, Kedar Kadel, Shuvaratna and so on. His musings of presence always gives inspiration to everyone, age has no matters, sex has no maters just he make his own world and bloom himself to spread happiness.

Earn a name of compassionate businessman of Nepal who built millions of dollars community centers in Pashupati temple premises, world heritage site and an ultimate holly place of all Hinud believers of the world. His contribution spread nation widely and majorly charity to flourish the Mutkinath Baba Philosophy. In book, Swami Kamalnayancharya express's his close interaction with authors. In Hindu tradition its like catch 22 situation to express gratitude towards disciple nevertheless he made it and his honest stand, Guru and Student relation is like sun and moon, both are cooperation happening vice versa, only people who lives in earth thought sun and moon sparing in sky, in reality both has own duty to serve the people and uplift the society.