NEW YORK -- The parents of Akai Gurley said Friday that their son was murdered by NYPD Officer Peter Liang, and that they feel Liang should be charged with homicide.

Their statement came hours after a damning report from The New York Daily News stating that Liang texted his police union representative while Gurley lay dying.

It also came just hours before Brooklyn District Attorney Ken Thompson confirmed that he will impanel a grand jury to consider charges against Liang.

Gurley’s mother, Sylvia Palmer, broke down in tears while talking to reporters Friday in Brooklyn inside the Brown Memorial Baptist Church, where Gurley’s funeral service will be held Saturday morning.

Gurley, 26, and his girlfriend, Melissa Butler, left Butler’s seventh-floor apartment inside the Louis Pink Houses in East New York, Brooklyn, on the night of Nov. 20. The pair tried to take the elevator but it wasn’t working, so they entered the stairwell.

It was dark in the stairwell, even though the building’s superintendant had asked the New York City Housing Authority to fix the lights months earlier. 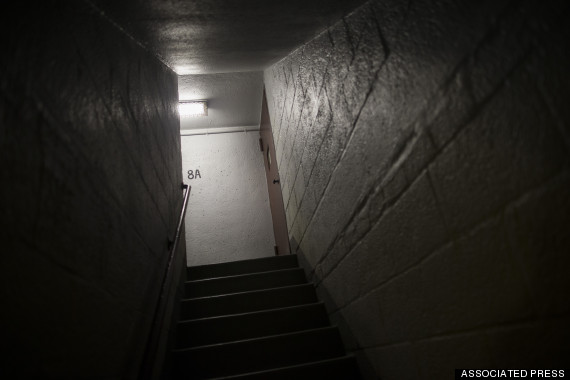 At the same time that Gurley and Butler entered the stairwell, officer Liang and his partner, Shaun Landau -- both of whom are rookie cops -- entered the stairwell from the eighth floor while doing what’s known as a “vertical patrol,” in which officers walk down the stairs of public housing buildings to prevent crime.

Liang had his gun in one hand, a flashlight in another, while opening the door to the stairwell. In what NYPD Commissioner Bill Bratton later described as an “accidental discharge,” a shot from Liang’s gun struck Gurley in the chest.

Gurley staggered down two flights of stairs until collapsing on the fifth floor. There, a neighbor called 911 and Butler tried to administer first aid. Gurley, a father of a 2-year-old daughter, was pronounced dead at the hospital.

According to the Daily News report Friday morning, a commanding officer and an emergency operator desperately tried to reach Liang and Landau after the neighbor’s 911 call, but the two officers were unreachable for six and half minutes. During that time, according to the paper, Liang was texting his police union representative.

The paper also reported Friday that Liang and Landau had been explicitly instructed not to conduct vertical patrols inside the Louis Pink Houses in the first place. The head officer of the local housing command, Deputy Inspector Miguel Iglesias, reportedly told the officers only to patrol outside the building, and if they entered, only to go into the lobby. 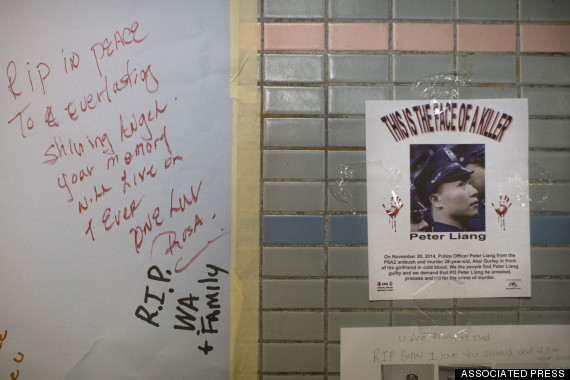 Those non-indictments set off massive protests across the country this week. The Rev. Al Sharpton and other civil rights leaders are organizing a massive march on Washington on Dec. 13 to call for the federal government to intervene in prosecutions of police officers facing criminal charges.

“We do not believe that this was just an accident,” Kevin Powell, a spokesman and adviser for the family, told reporters. “We feel that this is part of a pattern of reckless disregard for the lives of young people of color.”

Powell said Gurley’s parents believed their son’s death was part of a “series of modern-day lynchings” by police officers of unarmed, black men across the country. “We feel that this is connected in so many ways with Ferguson, with Oscar Grant in Oakland, with Trayvon Martin, and so many instances around the country,” he said.

Thompson said in a statement Friday that "there is no timetable for the grand jury to be impaneled or for its determination to be reached."

"I pledge to conduct a full and fair investigation and to give the grand jury all of the information necessary to do its job," he continued. "That information is still being gathered. As to those who have called for a Special Prosecutor to handle this case, I respectfully disagree. I was elected by the people of Brooklyn to do this job without fear or favor and that is exactly what I intend to do.”

Sylvia Palmer told reporters Friday that her son was “a good family man” who “loved his mother.”

“The night he was murdered, he went to get his hair braided and surprise me for Thanksgiving,” she said. “Now there will never be another Thanksgiving, another Christmas, another Valentine’s, another birthday.”

“My son was my heart and now he’s been taken away from me,” she continued. “He hasn’t done nothing wrong. He’s a good man. He loves his family. He was gonna bring home my granddaughter to visit me for the first time in two years, and now i never get the opportunity to spend any time with my son and my grandbaby.”

A wake and viewing for Gurley will be held Friday evening at the Brown Memorial Baptist Church in Brooklyn, as will the funeral service Saturday morning. A memorial service is also planned at the Louis Pink Houses Saturday afternoon.