I write a weekly column about life and politics in Santa Monica, California, for a news website that covers the city. This week our city on the bay feels like ground zero in the culture wars, or at least in the fantasy-league "War on Christmas." That's because a group of atheists have managed to supplant with their own displays a traditional sequence of booths telling the Nativity story that local churches and service groups have mounted in Santa Monica's famous Palisades Park for nearly 60 years.

As has been reported now around the country, the atheists first complained about using a public park to display a religious message, which caused the city to instigate a lottery to allocate spaces in the park. This year the atheists flooded the lottery with applications and won nearly all of 21 spaces, leaving the churches with only two for what had been a display of 14 booths.

When I went over to the park to check out the first of the atheists' displays, I couldn't help but think of a good book I read over Thanksgiving. We were visiting at my mother-in-law's and she had a copy of the new book by Harvard professor Stephen Greenblatt called The Swerve: How the World Became Modern, and I hijacked it. The book is about the rediscovery in the early 15th century of a copy of On the Nature of Things, a long philosophical poem the Roman Lucretius wrote in the first century B.C. to expound the teachings of the Greek philosopher Epicurus.

I couldn't put it down.

Epicureans thought that gods existed, or that they could exist, but they did not believe that any gods could, by the nature of being a god, give the slightest damn about what we humans did, or what happened to us. For the Epicureans, there could be neither divine judgment nor an afterlife.

This theology resonated with me in a peculiar way, because my view about the existence of God is the mirror image: the Epicureans say God doesn't care whether we exist, while I don't care whether God exists.

Why am I an akedist? Let's put it this way: if God isn't going to make it clear to everyone that he exists, then, as I see it, it's his problem. He's the omnipotent one; why all the mystery? As a result, the world has many different creeds, and I figure I should live as moral a life as I can based on standards that will be understandable by as many people and peoples as possible -- any reasonable god should understand that, right?

What does this have to do with Nativity displays in Palisades Park? It's a long introduction designed to establish my credibility: that I have no reason to promote religion or, since I'm Jewish, the Christian religion in particular, when I say that the atheists who pushed the Nativity scenes from the park showed the very same stiff-necked intolerance that they accuse religions of.

Imitation is the sincerest flattery, and what's happened is that some atheists can't help themselves from aping the current norm of combative religiosity. In so doing, they give atheism, a noble intellectual tradition if there ever was one, a bad name.

I may have an iffy relationship with God, but I believe in the First Amendment -- all of it. The amendment not only contains the no-establishment clause, but also the free exercise clause, and in the spirit of that it's reasonable for public property to be used at times for religious expression or celebration, so long as the uses are not permanent, overtly proselytizing, or aggressive towards anyone else's beliefs.

Agreed, the First Amendment does not permit a permanent cross in a park, or the Ten Commandments in a courthouse, or prayers in school; but calling a temporary Nativity tableau a violation of the separation of church and state is like saying a public radio station can't play Handel's Messiah.

The displays that have pushed the Nativity scenes from Palisades Park not only ridicule the beliefs of others -- juxtaposing, for instance, as examples of myths, pictures of Jesus, Santa Claus and the Devil -- which is bad enough, but the whole thing is slap-dash, showing minimal artistic effort. 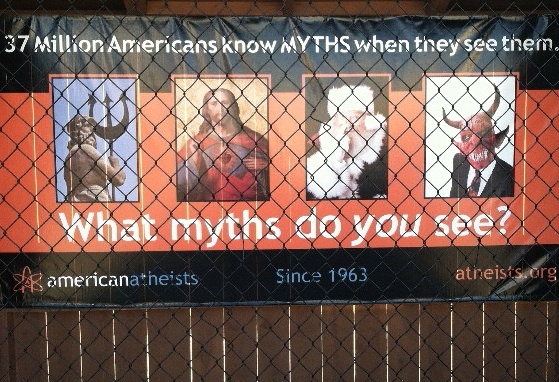 With the Nativity scenes non-Christians or non-believers at least got the benefit of modern folk art; with the atheists' displays you only get words behind chain link fences.

Note to the atheists: instead of a mere quotation from Jefferson (who, by the way, described himself as an Epicurean, not as an atheist), how about a display of him at his desk, with a razor, excising all supernatural verses from the Bible? I mean, if you're hell bent on making yourselves look like jerks, at least make an effort so that you don't look like lazy jerks.

But the bigger question is, why have this fight? Palisades Park is 1.4 miles long: plenty of room to allow, for the month of December, anyone to exhibit a display. The city should call the park a free speech zone for a month, and we could all celebrate that.