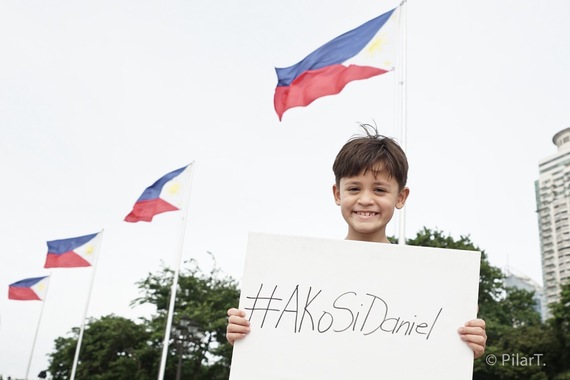 Image from The Philippines Foundation. Photo by Pilar Tuason.

As another academic year gets into full swing in many countries in the Northern Hemisphere and some parts of the Southern Hemisphere, so too does an education campaign called #AkoSiDaniel in the Philippines. With the aim of getting 1.2 million primary-age out-of-school children in the country into schools and learning, the cause is making headlines with the support of local and international youth leaders, nonprofit organizations, and celebrities united to bring hope to young Filipinos living in poverty.

Inspired by nine-year old Daniel Cabrera of Cebu and the global Up For School movement, #AkoSiDaniel, meaning "I am Daniel," was launched in July 2015 by The Philippines Foundation in partnership with international initiative A World at School and American crowdfunding company Crowdrise.

A few weeks before, the photo of Daniel studying on a makeshift desk by a McDonald's underneath a lamp post went viral, drawing the attention of online and on-the-ground communities who mobilized to support him and his mother. As a result of their collaboration, they raised over 230,000 Philippine pesos, equivalent to approximately 5,300 U.S. dollars, as well as scholarships that will be financial assistance for his living expenses and schooling.

In the spirit of their crowdfunding project, #AkoSiDaniel is anchored to a digital platform, AkoSiDaniel.org. Through this microsite, people across the world can sign the Up For School Philippines petition and donate to The Philippines Foundation, which will support programs devoted to increasing access to quality education for children in the Philippines. 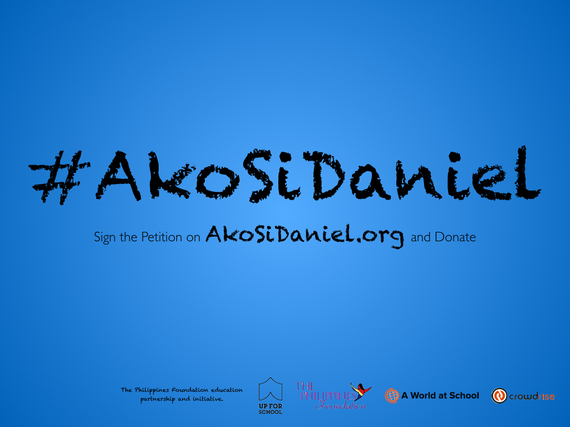 Image from The Philippines Foundation.

At a forum this past May 2015, Min Jeong Kim, Head of the Global Education First Initiative Secretariat, stressed the importance of innovative funding to education. Therefore, partnerships such as AkoSiDaniel.org are imperative for making a positive difference in the lives of youth like Daniel, because, unfortunately, Daniel's plight is only one among many. In the Philippines, poverty, natural disasters, conflict, and shortages in education resources hinder children and their family from pursuing and persisting in school.

These challenges have placed the Philippines on a list of nations yet to achieve United Nations Millennium Development Goal 2, which, in 2000, set a global mission to achieve universal primary education by the end of 2015. Today, there are around 59 million primary-age children who are unable to realize their potential through education. As a result, governments have been mobilizing talent and treasure to set an agenda that will afford their young populations an education.

To this end, the Philippine government released its own framework for action to accelerate and sustain its efforts in expanding access to primary schooling, in time for approval of the Sustainable Development Goals at the upcoming United Nations Summit in late September 2015, which will call for inclusive and equitable quality education and lifelong learning opportunities for all.

With only a month left until the historic conference, #AkoSiDaniel joins the global Up For School coalition bringing hope to children living in difficult conditions, deprived of pencils, books, teachers, and schools. Supporters and strangers alike can join in solidarity by going to AkoSiDaniel.org, signing the petition, donating, and raising awareness among family and friends on social media and in-person. Now is the time to empower current and future generations through education.

Benedict Joson is A World at School Global Youth Ambassador for education supporting The Philippines Foundation and #AkoSiDaniel campaign.