After undergoing renovations to bring the property back to its former glory, notorious mobster Al Capone's Miami Beach estate is back on the market for $9.95 million.

Originally from Chicago, "Scarface" Capone was a part of a wave of celebrities who headed down south to gobble up Miami property. He bought the 36,000-square-feet island property at 93 Palm Avenue for a measly $40,000 in 1928 -- about $538,000 today -- from Clarence Busch of the Anheuser-Busch brewing dynasty, according to Prudential Douglas Elliman.

(Capone's entry in the 1940 census dutifully lists "prison" as his previous address.)

Built in 1922, the sprawling estate was an impressive piece of real estate for its time. The pool was built at 30-by-60-feet to best the Biltmore Hotel's record for largest pool in the area. With more than 6,000 square feet of living space and a 30,000 square foot waterfront lot, the estate has a main house, 2-bedroom bedroom guest house, and a 2-story pool cabana.

Venezuelan architect and developer Luis Pons has restored the property to bring it back to its aura of 1920s greatness, according to Prudential Douglas Elliman, even maintaining the original brass fixtures. The original powder room is still intact as well, housing decades of history of women pampering themselves for a night out. Capone's old bedroom also boasts a place in history: he reportedly succumbed to syphilis in the room when he died in 1947.

WATCH: Capone has gone down in history as one of the most notorious criminals: 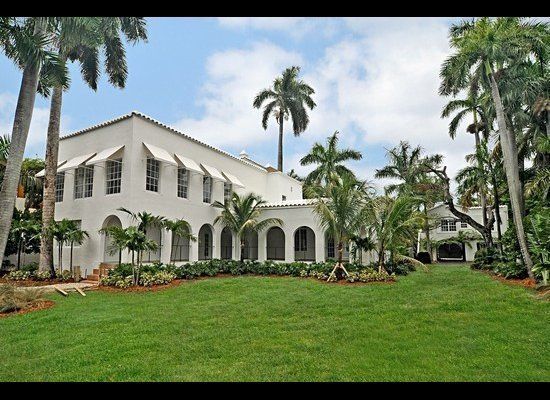