Candidates often send out fundraising solicitations from their family, prominent political figures or regular citizens who are just so excited about the campaign that they need to help out. But on Friday, Sen. Al Franken's (D-Minn.) campaign tried someone new: Woman Picking Out Fruit In Supermarket, who is co-chair of People in Stock Photos for Franken (PSPF).

"Hello, I'm Woman Picking Out Fruit In Supermarket," read the email sent to Franken supporters, which included an image of a woman picking out fruit in the supermarket. "And I'm writing to you today on behalf of Al Franken -- a Senator who stands up for real people (including those of us who make a living posing for stock photos)."

More from the email:

There's a reason I’m standing with Al. You see, I'm not just Woman Picking Out Fruit In Supermarket. I am also an actual woman worried about the right-wing attacks on my access to health care. [...]

Al's a Senator I can count on to stand up for all women -- whether they're walking a golden retriever in the park, pointing at a chart in an important meeting, or simply staring into the camera. [...]

I hope I can count on you for a contribution. After all, the rights to stock photos aren't cheap. And neither is the actual grassroots organizing Al's team does every day, fighting to keep progressive values -- and the middle class -- alive and well.

And whether you're a Tattooed Guitar Player, a Guy Wearing Hard Hat, or an Elderly Couple Sitting At Kitchen Table, there’s no better way to show your support than by making a contribution today.

Photo of Woman Picking Out Fruit In Supermarket: 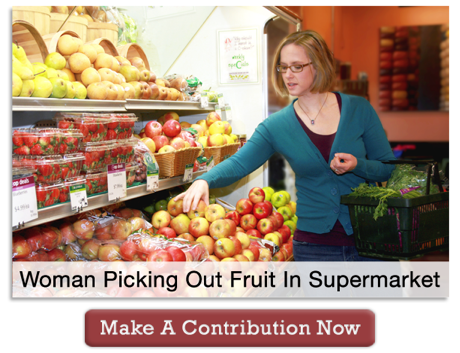