Well the "Land of 10,000 Lakes" took what seemed like 10,000 years, but the Minnesota Supreme Court finally ruled yesterday in a unanimous decision to certify Al Franken's election victory last November. The final margin of victory for Franken was 312 votes out of 2.9 million cast, which translates to a whopping .01%. So, if anyone tells you that your vote doesn't count -- they're still probably right, I don't even think I know 312 people, although Facebook tells me otherwise. 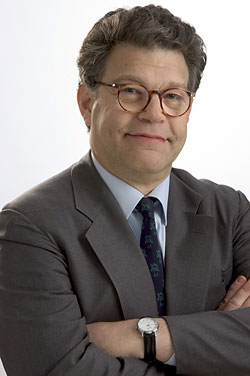 Franken's victory now gives the Democrats a 60 vote filibuster-proof majority in the senate, at least theoretically. The very fragile supermajority assumes that the two independents who caucus with the Democrats (Bernie Sanders and Joe Lieberman) will actually vote with the Democrats, not to mention the 56 other Democrats, two of whom (Ted Kennedy and Robert Byrd) are in poor health. Republicans have traditionally been better at getting their congresspeople to march in lock step with the party agenda, so just how filibuster-proof the Democratic majority turns out to be is, as yet, completely unknown.

At any rate, a hearty congratulations to Al Franken. I think we can all agree that it'll be nice to never have to hear the following again: