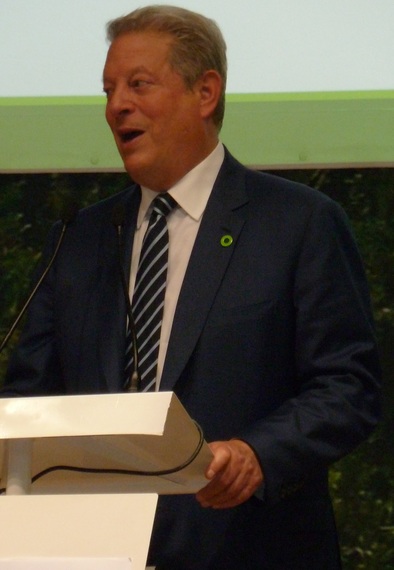 Pacing energetically beside the podium in his shirt sleeves in one of the conference's two enormous plenary halls, Gore gave an eloquent tour de force on the climate crisis and its solutions.

Using the masterful oratorical skills he has practiced over many years as a full-time climate advocate, Gore exhorted the delegates to find the moral courage to break through the impasses dividing them to save the Earth for future generations.

His deeply knowledgeable, impassioned presentation showcased a vast spectrum of ever-more severe climate impacts. It is hard to imagine any delegate within earshot who was not moved to strive harder to reach a climate agreement.

On display along with the slides and videos was Gore's remarkable ability to stare unflinchingly at the most horrific and far-ranging impacts of global climate change while somehow finding reasons for hope and strength.

Comprehensive overviews of climate issues have become Gore's stock-in-trade since he first came out with his documentary, "An Inconvenient Truth" In 2006, which brought climate issues to greater international prominence.

He has since honed his slide presentation pitch to a high art, infused for the Paris conference with dramatic contemporary video footage of floods and other climate disasters in progress, even as the conference unfolded.

Bringing the audience to its feet for a standing ovation at the finale, Gore exhorted the negotiators to remember their humanity and produce a strong, robust global climate agreement--one that "we can be proud of when future generations ask us what we have done."

Gore began with the first images of the Earth from space that galvanized the rebirth of the environmental movement. He then showed the narrow band of atmosphere surrounding the planet. "That thin volume of air," he said, "is being filled up with greenhouse gas pollution. We're now spewing 110 million tons of pollution every day as if it were a sewer."

Because of the pollution released by the burning of fossil fuels, the atmosphere now traps as much energy every day as 400,000 Hiroshima bombs, he said. As a result, "Fourteen of the fifteen hottest years have occurred since 2001, and there's a 99.9 percent probability the current year will be the hottest on record." Some 2,300 people were killed this year by heat wave in India, he said.

More than 90 percent of the excess heat that the atmosphere now traps goes into the oceans, Gore indicated. Warmer than normal ocean temperatures created Typhoon Haiyan in the Philippines. Hurricane Sandy, too, drew strength as it crossed ocean waters 9°F hotter than usual. The build-up of heat in the ocean causes "rivers of moisture in the sky" that rain down as floods and produce extreme weather "with regularity."

"India has been suffering a great many of these events," Gore said as he projected powerful on-screen images of the flooding in Chennai, India that occurred during the few days preceding his address when five feet of rain fell. Two million people have been affected by the floods in India, according to Indian Prime Minister Modi.

The same day as his talk, the U.K. received the largest downpour in its history, with 378 mm of rain (almost 15 inches) falling. "These events are taking place while we are here," Gore emphasized. Then in quick succession, he showed dramatic scenes of catastrophic extreme weather from all over the world, including floods in Spain, Italy, France, Georgia, Japan, as well as in China's Sichuan and Zhejiang provinces.

The same heat causing extraordinary rainfalls is elsewhere pulling moisture out of the soil, Gore said. "North and South Korea and India are suffering unprecedented droughts. . . . 97% of California is in drought. . . . Valparaiso, Chile has one of the largest fires ever, if not the largest. . . . Fires raging in Australia [now] have never been as intense and have never been as large and fast and are unstoppable."

Pointing to the link between social conflict and climate change, Gore said that the record 2006-2010 climate-related drought in Syria dried up 60 percent of Syria's land and killed livestock herds, so people fled the drought-stricken countryside for cities. There they encountered poverty and desperate conditions. Climate change thus laid the foundation in Syria for opening "the gates of hell," Gore remarked.

Gore also showed melting ice in the Arctic and Antarctic and mentioned the risks that sea level rise presents to coastal cities where billions of dollars of infrastructure are at risk. He singled out Miami, Florida where the accelerating effects of sea level rise are already being felt. He touched on the salinization of land in Egypt due to sea level rise and showed a dramatic video on the effects of rising seas in West Africa, where the sea is rising at above average speed.

Speaking of the oceans and coral reef losses, he warned that we are "pushing the ocean ecosystems to the brink of collapse." Concluding his survey of climate impacts, Gore said that the consequences of climate change are going to worsen if we don't come to an agreement in Paris. "The solution is to recognize that we are at a turning point. Some civilizations have reached a turning point and made the wrong choice," he noted.

"But this is not only a dangerous crisis but an opportunity," he added. "We have the solutions at hand now. We have to put a price on carbon and on denial in politics. Look for a moment at how far we have come."

"Wind power . . . costs have come down dramatically. Wind power is the cheapest power to produce in both Germany and the UK. In the US, one of the utilities makes the electricity free from six to nine pm. . . six cities already on 100 percent renewable electricity.

"On a global basis, wind could supply 40 times more electricity than the world needs. It's the fastest growing [power source.]"

The cost curve is bending downward even more steeply for solar photovoltaics, and its use is expanding rapidly throughout the world. "The trend is clear: we're going to get grid parity [with renewables] even without subsidies," he said, referring to the price at which power from renewables equals that from conventional fossil fuel supplies.

Enough energy arrives on Earth from the sun in an hour, Gore noted summarily, to provide all the energy we need on Earth for an entire year. "The total new worldwide investment in renewable capacity every year now exceeds new investment in fossil fuel," and the renewable share is growing, spurred by the growing success of green bonds with private investors and others. "The Age of Renewables is beginning," Gore declared.

China has announced that by 2017 it will have a carbon cap-and-trade system in six major areas, Gore said, creating a market price for carbon. He then showed a map studded with myriad sites where coal-fired power plants have been retired or cancelled in the U.S. and noted a recent U.K. announcement that the country will close all its coal power plants by 2025. "We are moving dramatically in the direction of renewables," he said.

"Last year was the first time in recorded history that CO2 levels did not go up when there was not a major recession or an event like the breakup of the former Soviet Union," Gore said. "This year it is too early to confirm the statistic but [apparently] CO2 emissions levels went down this year. If that is confirmed, we will look back on this year and last year as the time when we did reach the turning point.

"We are winning this, but we must win it faster! We must accelerate the pace. A lot of damage has already been done. More damage will occur because of the global warming pollution that is already in the atmosphere. So, we must speed up! "

Speaking of growing global mobilization on climate issues, Gore praised the activists from all over the world who have held mass marches to save the climate. "The NGO community, the civil society, and activists have done a fantastic job in mobilizing people to demand action. . . . many of the leaders who spoke here on Monday referred to the marches in the streets."

"The best chance to address this climate crisis is here, now," he said. "We have a few days left. Whatever delegation you are part of, use these next 72 hours to double down on your commitment to do the right thing."

"There are people," Gore said, "who have been to previous conferences, and they look back on the long string of them, and they're tempted to conclude, 'it's not going to make any difference.'"

Quoting American poet Wallace Stevens, Gore declared, "After the last no, comes a yes, and on that yes, the future world depends."

"Every great moral cause that humanity has been faced with has met with a series of no's and fierce resistance," he said. "All of these moral causes have met no's and fierce opposition. But they all eventually came down to a single choice between one of two options: what is right and what is wrong. In this case, what is right is to save the future of our planet and to say to future generations that we've done the right thing here. "

If people one day live a sustainable world, he declared, they will ask: "How did you find the moral courage" to rise above the differences "and see the larger moral question that was at stake?" If that day comes, he said, they will learn that the answer is in part that people from 195 nations came together in Paris "in support of a higher purpose to protect our home, to protect our planet Earth. . . . We will say to [future generations] in answer, 'We found out that political will was itself a renewable resource.'"
___________________
John J. Berger, PhD. (www.johnjberger.com) is an energy and environmental policy specialist who has produced ten books on climate, energy, and natural resource topics. He is the author of Climate Peril: The Intelligent Reader's Guide to the Climate Crisis, and Climate Myths: The Campaign Against Climate Science, and is at work on a new book about climate solutions.