The 12th issue of Inspire also features a photo of Times Square inside its pages, which has NYPD officials on high-alert. 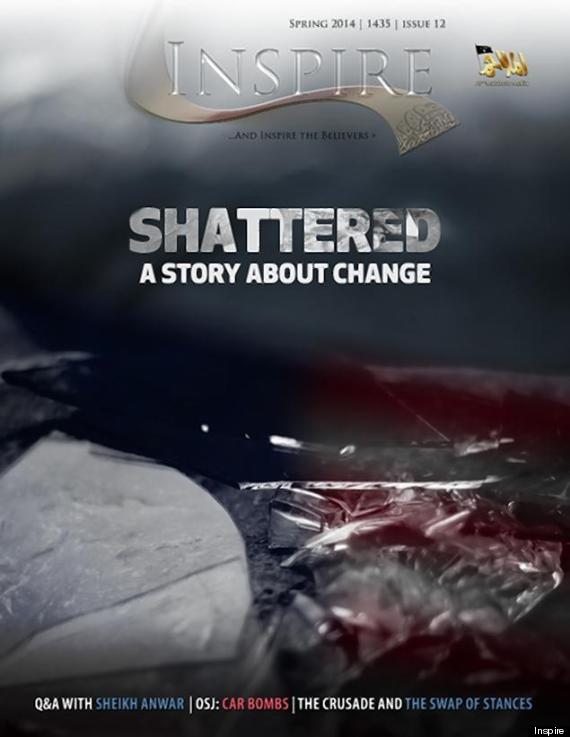 "We are certainly very concerned by Inspire,” said NYPD Commissioner Bill Bratton, according to The New York Daily News. Inspire is thought to have influenced the Boston Marathon bombers, who detonated pressure cooker bombs inside backpacks. Bratton added that the latest issue “has instructions on a new larger device.”

The jihadist magazine tells prospective bombers to target places with lots of people. "What it talks about is targeting … specific places, specific targets, specific events," John Miller, a former CBS News correspondent who now serves as the NYPD's deputy commissioner of intelligence, told CBS. "But it goes beyond that call, and it says, ‘and by the way, here is a simple set of instructions for a car bomb that you can make with essentially, you know, a trip to a big-box hardware store and a couple of chemicals.’"

An editorial on Inspire's website warns that "many Feisal Shahzads are residing inside America, and all they need is the knowledge of how to make car bombs."

Feisal Shahzad, a U.S. citizen, was arrested in 2010 after trying to detonate a car bomb in Times Square. His plot was thwarted by a nearby food vendor and Navy veteran named Duane Jackson.

"They are all yearning to fulfill their duty of Jihad...," the editorial continues. "The American government was unable to protect its citizens from pressure cooker bombs in backpacks, I wonder if they are ready to stop car bombs!"

Bratton noted that the NYPD has foiled every terror plot in the city since 9/11. (The number of legitimate terror plots foiled by the NYPD, however, is disputed.)

For Miller, the rise of Inspire magazine could signal the decline of a centralized Al Qaeda. It could also, however, mean the U.S. has to worry about more "lone wolf" terrorists.

“One way, you can read Inspire magazine as some kind of sign of failure, which is Al Qaeda central has now diminished to the point that it has to put out this wide net and say, ‘Can anybody do anything, because as an organization we’re not effective that way?’” Miller told CBS.

“Or you can flip that coin and say, they’ve now gone from being an effective terrorist organization to being a narrative that gets out to millions of people,” he said. “The Boston Marathon bombers, Jose Pimentel — you can pick your person who has been picked up in one of these plots — usually never made contact with al Qaeda, but many of them got their plans and plots from Inspire magazine.”

In a statement emailed to Gothamist, Miller added that "Each day, we evaluate risk and deploy resources to high-profile places or sensitive locations based on intelligence streams and world events. We will factor what we're seeing in Inspire to that matrix."

The United States isn't the only target. In a section of Inspire titled “Car Bombs inside America," the author reportedly states that “America is our first target, followed by United Kingdom, France and other Crusader countries."