Al Sharpton got into a heated clash with Rep. Tim Huelskamp of Kansas during his MSNBC show Wednesday night.

Sharpton asked Huelskamp to discuss what Sharpton referred to as the the issue of tax rate fairness. He asked, "Is it fair that billionaires pay a lower tax rate than their own secretaries?" Huelskamp did not answer the question because according to him, Sharpton's information was incorrect.

"Well they actually don't, according to the IRS," Huelskamp said.

Sharpton started to raise his voice and asked the question again. "Is it fair? Is it fair?" Huelskamp continued to deny the accuracy of Sharpton's question. "It's not true, Al."

Sharpton then said "on the basis of the report—if the report is inaccurate, fine, you stipulate that—I'm asking you, is it fair? Is the arrangement fair, in your opinion?"

"Well the arrangement is not the fact. The fact is 2 million Americans are out of work today because of the President's policies," Huelskamp said.

Sharpton and Huelskamp went back and forth on this issue for some time with raised voices and theatrical hand gestures. Sharpton said that the problem with America is that people won't even discuss the issue of fairness.

"What I'm trying to bring home to the American people is that you guys can't even discuss fairness. I've asked you several times whether something is fair, and you can't even bring yourself to discuss in fairness," Sharpton said. Huelskamp said, "fairness is not the end result, it's the opportunity. And everybody in America today has the opportunity to get ahead."

"I think you're absolutely right and I think the only way we're going to get ahead is we at least have to agree on fairness," Sharpton said.

Watch the video above and view a slideshow of some of the more heated moments below: 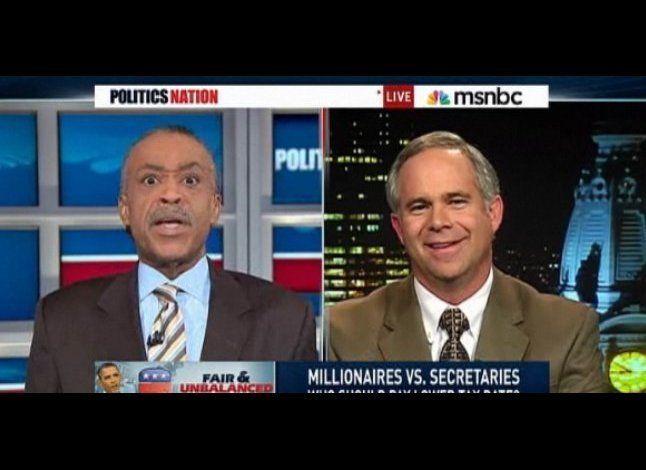