Alaa Abdel Fattah, one of the most recognizable faces of Egypt's 2011 revolution, has been locked up time and time again for speaking out against injustice. He is currently serving a five-year jail sentence for taking part in a peaceful protest.

“There is no hope of reforming the Egyptian state or any of its institutions, including the presidency. These institutions and their leaders deserve a revolution,” he said in a recent interview from Cairo’s Tora prison, where he is not allowed to speak with reporters. Abdel Fattah’s mother Laila Soueif asked her son questions on behalf of HuffPost Arabi during a prison visit and relayed his answers.

Abdel Fattah, 33, a software engineer-turned-blogger and activist, has been repeatedly jailed for taking part in demonstrations over the last decade. He was first detained in 2006 for protesting the autocratic rule of former President Hosni Mubarak and imprisoned again in 2011 after demonstrating against the policies of the military council that replaced the dictator. An arrest warrant was issued for him in 2013 after he criticized Islamist President Mohammed Morsi. Abdel Fattah continued to protest injustice after Morsi was ousted by Egypt's ex-military chief and current president, Abdel Fattah el-Sissi, and has been in and out of jail for the last two years on various charges. In February he was sentenced to five years in prison for taking part in a 2013 protest against military trials for civilians.

Abdel Fattah's family has been through a nightmare. He and his sister Mona both received a one-year suspended sentence on charges of damaging property during a 2012 protest. Another sister, Sanaa, was jailed in 2014 for taking part in a different peaceful demonstration. The whole family went on hunger strike last year to protest the prison terms.

Their father, Ahmed Seif al-Islam, a veteran human rights activist and survivor of torture in Mubarak’s jails, died last August while Sanaa and Abdel Fattah were in prison.

“Before he died, my father said that my conditions were far better than others in jail, particularly Islamist prisoners,” Abdel Fattah said in the interview.

Empathetic about the ordeal of his fellow detainees, the activist also talked about being frustrated that prison authorities have forbidden him to have any books, even titles published by Egypt’s Ministry of Culture.

“This is part of the effort to intellectually isolate me from society,” he said.

Egypt's crackdown on all forms of opposition has coincided with rising instability in the country. A local branch of the Islamic State militant group joined a long-simmering insurgency in Egypt’s Sinai peninsula. The group’s Egypt branch recently claimed responsibility for the beheading of a Croatian hostage and a string of violent attacks in Cairo.

“It’s like the rise of the Nazis in Europe during the 1930s -- so many factors fueled their rise for years before it became clear just how dangerous they were,” he said. “Daesh [the Islamic State] is a monster our societies have fueled and created for a long time.”

Abdel Fattah is a symbol of the tragic arc of the 2011 revolution. The young activists who protested against Mubarak were quickly sidelined, as Islamists and officials from the former regime tussled over power. Egypt’s liberal youth have been caught up in the latest wave of repression since Morsi was ousted in 2013. Journalists and human rights groups operate in a climate of fear, while prisons are crowded with tens of thousands of detainees, according to human rights groups.

“The revolutionary youth are too weak for the regime to care about reconciling with them,” Abdel Fattah said. When asked about the possibility of the champions of the 2011 revolution working together again, he cautioned that “there is no longer one revolution.”

“It has become multiple revolutions, and we first have to think about the consequences of this before talking about uniting the revolution,” he said.

Icon Of Egypt's Revolution Speaks From Behind Bars
Heatwave In Egypt 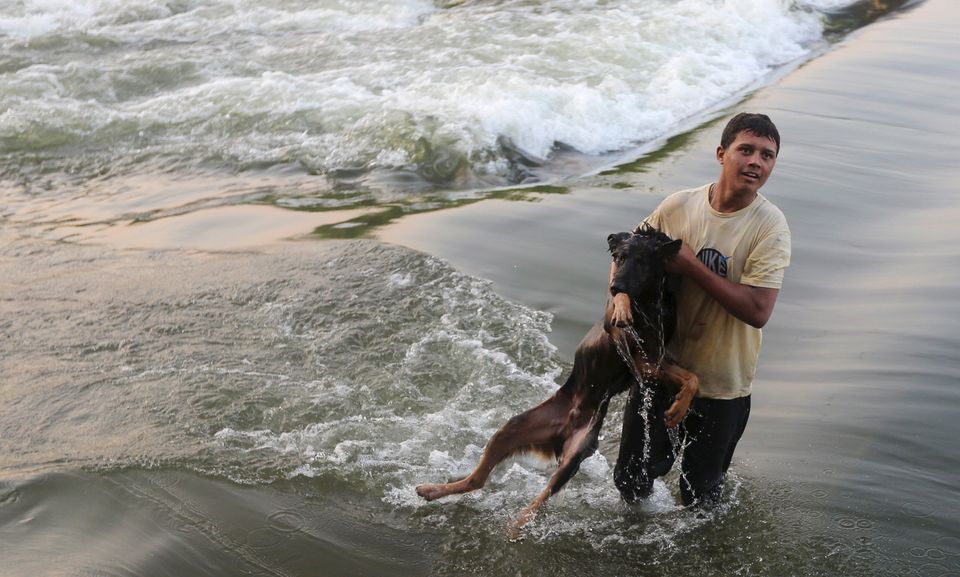 1 / 6
A boy plays with his dog along the beach at the river Nile, to escape from the hot weather, on the outskirts of Cairo, Egypt, August 12, 2015. A heatwave killed at least 61 people across Egypt from Sunday to Tuesday and caused nearly 600 people to be admitted to hospital, Egypt's health ministry said on state news agency MENA on Wednesday. REUTERS/Mohamed Abd El Ghany
Mohamed Abd El Ghany / Reuters