There's healthy sportsmanship in the world of collegiate football -- and, apparently, blatant homophobia.

As Towleroad is reporting, a unofficial fan website is selling T-shirts for the Jan. 9 Bowl Championship Series (BCS) matchup game between Alabama Crimson Tide and the Louisiana State University (LSU) Tigers which not only poke fun at the latter school's French heritage, but also appear to be a celebration of gay bashing.

"Hey homeauxs," the T-shirts read. "We just beat the hell out of you."

The shirts have been met with a steady trickle of criticism from Facebook users. "It's 2011 -- gay bashing is no longer considered in good fun," one user writes. "And what's worse -- this isn't even clever -- it's 7th grade 'humor.' Actually, that's an insult to 7th graders."

Writes another: "Advertisements like this certainly don't help to make us look any less bigoted than we were when the KKK was lynching people."

UPDATE: The site where the T-shirt had been for sale appears to have been taken down.

View a photo of the T-shirt below: 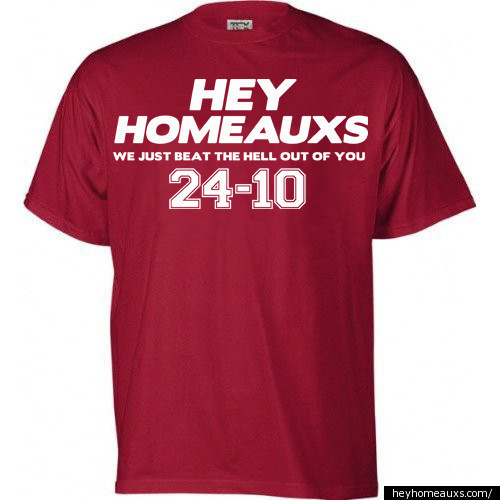