BEAUREGARD, Ala. (AP) — The youngest victim was 6, the oldest 89. Relatives said one extended family lost 10 members.

The 23 people killed in the nation’s deadliest tornado in nearly six years came into focus Tuesday with the release of their names by the coroner.

They included 6-year-old Armando Hernandez Jr., known as “AJ,” torn from his father’s arms two days after singing in his first-grade class musical; 10-year-old Taylor Thornton, who loved horses and was visiting a friend’s home when the twister struck; and Jimmy Lee Jones, 89, who perished along with his wife of six decades, Mary Louise, and one of their sons.

The search for victims, pets and belongings in and around the devastated rural community of Beauregard continued amid the din of beeping heavy machinery and whining chain saws. But Sheriff Jay Jones said the list of the missing had shrunk from dozens to just seven or eight.

“We’ve got piles of rubble that we are searching just to make sure,” said Opelika Fire Chief Byron Prather Jr. “We don’t think we’ll find nobody there, but we don’t want to leave any stone unturned.”

The youngest, AJ, had taken shelter in a closet with his father and older brother when the tornado hit, said Jack Crisp, the boy’s uncle. The punishing winds tore the family’s home apart, Crisp said, and pulled both boys from their father’s arms.

“He had them squeezed tight, and he said when it came through, it just took them,” Crisp said. “It just demolished the house and took them.”

The boy’s father and brother both survived. AJ did not.

Jackie Jones said she and her siblings rushed to her parents’ house after the storm passed and nobody answered the phone. “They usually answer on the first ring,” she said.

The siblings found the home reduced to its foundation. One of their two brothers who lived at the house survived and was taken to a hospital. But Jimmy Lee and Mary Louise Jones, married for more than 60 years, had died along with their 53-year-old son Emmanuel.

Those three deaths meant cousins Cordarrly and Demetria Jones lost their grandparents and an uncle. They said seven others killed were their cousins by blood and marriage.

“Everybody in this area just about was related,” said Demetria Jones, 28. “It’s devastating.”

The body of David Wayne Dean, 53, was found by his son in a neighbor’s yard after the twister demolished his mobile home. He was known as “Roaddog” because of his love for Harley-Davidson motorcycles.

“He was done and gone before we got to him,” said his sobbing widow, Carol Dean, who was at work at Walmart when the storm hit. “My life is gone. He was the reason I lived, the reason that I got up.”

The tornado was an EF4 with winds estimated at 170 mph (274 kph) and carved a path of destruction up to nine-tenths of a mile (1.4 kilometers) wide in Alabama, scraping up the earth in a phenomenon known as “ground rowing,” the National Weather Service said. It traveled a remarkable 70 miles or so through Alabama and Georgia, where it caused more damage.

Ninety people were injured in the Beauregard area, authorities said. Most have been released from the hospital.

President Donald Trump said he will visit Alabama on Friday to see the damage. “It’s been a tragic situation, but a lot of good work is being done,” he said at the White House.

Along the two-lane country road where some of the victims died, firefighters used heavy machinery to overturn pieces of houses that were blown into a gulley. A car sat atop the remains of one house. A red-brick foundation was all that was left at another lot.

The search took its toll around Beauregard, an unincorporated area of roughly 10,000 people near the Georgia line. Church chaplain Ike Mathews walked down a road lined with broken trees and debris as he went to check on members of his congregation and emergency workers.

“Yesterday I talked to some team members who had found bodies. They’re hurting. The community is torn up. They started crying talking about it,” said Mathews, an associate pastor at Rising Star Missionary Baptist Church.

Many of the people living in the area are senior citizens who moved to the country after retiring from textile mills or an old magnetic-tape manufacturing plant that closed years ago, Mathews said.

“They start with a mobile home and hope they can build a house someday. They invest in their homes, and they have a sense of legacy. It’s something to leave their kids and grandkids,” he said.

It was the deadliest tornado to hit the U.S. since May 2013, when an EF5 twister killed 24 people in Moore, Oklahoma.

Cindy Sanford said one of her neighbors in Beauregard died in the storm, and another neighbor remained missing Tuesday.

“I pray to God that they find her,” Sanford said as picked through remains of her home, which tumbled in the wind and is now scattered across neighbors’ land.

Sanford said she left home with her 5-year-old grandson about five minutes before the storm struck after she got a feeling it was unsafe.

Associated Press writers Kate Brumback and Jeff Martin in Atlanta and Russ Bynum in Savannah, Georgia, contributed to this report.

This story has been corrected to show that the coroner now says the oldest victim was 89, not 93. 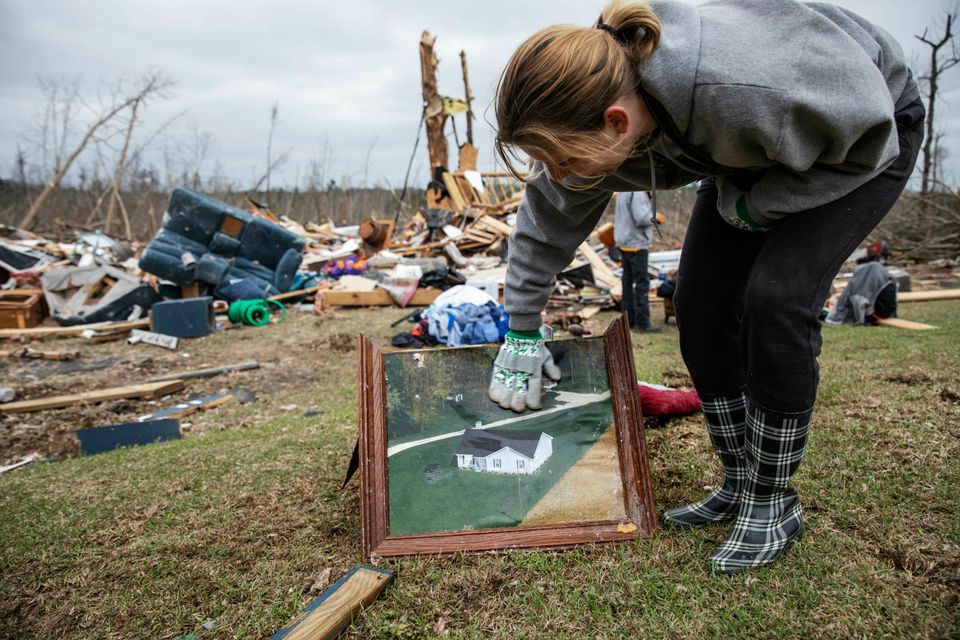 1 / 18
Debris from a friend's home stands in the background as Ashley Griggs wipes away dirt from a photo found in the rubble of what it used to look like before it was destroyed by a tornado that hit Beauregard, Alabama.
ASSOCIATED PRESS