The core story of Disney’s live-action remake of “Aladdin” remains the same as the animated original — but a number of changes bring the film into a whole new world.

Nasim Pedrad, whose new character Dalia is one of those changes, told us that it was “joyously overwhelming” to find out she was in “Aladdin,” especially considering what the movie meant to her growing up.

“It resonated with me personally, especially growing up as an Iranian American girl,” she said. “For the first time I saw a Middle Eastern protagonist in a movie, so for the first time I really saw someone who sort of looks like me.”

Like the 1992 original, the 2019 remake follows the story of “street rat” Aladdin (Mena Massoud) as he comes across a magic lamp and enlists the help of a Genie (Will Smith) to impress Jasmine (Naomi Scott), the princess of Agrabah. However, the live-action version did add a number of updates, which Pedrad was happy to talk about.

Jasmine gets the spotlight

First and foremost, Jasmine gets more of her own storyline in the new movie, as opposed to the animated version.

While the character was always strong-willed and independent, the original focused mostly on Aladdin and his journey. In the 2019 version, Jasmine has ambitions of becoming the sultan and gets her own anthem, “Speechless,” a song about speaking up even if the situation seems hopeless.

Talking about the “modern spin” on Jasmine, Pedrad told us, “I find her incredibly fierce and self-determined.”

“I think you’ll notice in this modern take that she has a relentless stamina and tenacity to her, even in the face of being undermined by Jafar and all these suitors,” said Pedrad.

You ain’t never had ... to remember so many characters before

Besides Jasmine, other characters not named Aladdin also get moments to shine, including the Sultan’s guard Hakim (Numan Acar) and one of the bumbling failed suitors Prince Anders (Billy Magnussen).

Pedrad’s Dalia, originally called Mara before a name change, is more than just a handmaiden to Jasmine. She’s a “wing woman not dissimilar from how Genie is kind of a wing man to Aladdin,” explained the actress.

“It was so cool to get to create something from scratch and see it against the backdrop of a story we already know and love,” she continued. “It made sense to me in this movie that Jasmine had a human friend other than her unpredictable pet tiger.”

Genie probably wishes he could break the Genie rules

One of the rules of genie-dom is not being able to make people fall in love with each other, so our guy in blue has his work cut out for him when he starts having feelings for Dalia.

Since this interview took place before the movie was released, Pedrad wouldn’t say much about the romance but did add, “I would definitely say Dalia and Genie had a vibe.”

In the animated movie, after Genie sings “Prince Ali,” Aladdin enters the palace and lets the Sultan fly around on the magic carpet. Jasmine, overhearing Aladdin and the Sultan talking about winning her over, states that she’s not a prize to be won.

The new movie adds a different spin on this moment, making it even more embarrassing for Aladdin in what actor Mena Massoud calls “the jam scene.”

Following Smith’s updated rendition of “Prince Ali,” Aladdin goes before Princess Jasmine and the Sultan (Navid Negahban) to present a number of gifts, hoping to win the princess over. Aladdin is nervous and stumbles over his words; much like the animated version, Jasmine calls him out for sounding like he wants to buy her hand in marriage. Then, the scene devolves into Aladdin just rambling about all the different jams he’s brought.

“The jam was just a funny little thing that came out of this one scene we shot where Aladdin is dressed up as a prince and arrives at the palace as a potential suitor for Jasmine. He brings a number of delicacies with him, one which happens to be jam,” Pedrad explained to HuffPost.

“I don’t even know if it was originally in the script,” she added, “but it became this really playful scene, partially improvised, partially sort of discovered through the direction that [Guy Ritchie] gave us, listing various things that Aladdin could be bringing to the palace to impress Jasmine.”

Even though Pedrad noted that Aladdin brought other gifts too, he really seemed to focus in on that one, leading to the scene getting more awkward with every mounting mention of fruit preserves.

“Jams stuck,” she said. “Tiny spoons is also in there. A lot of that was just finding things on the day that felt playful and fun and then running with it.”

Directors, take note: When you’re remaking a classic, all you really need is jam to gel things together. 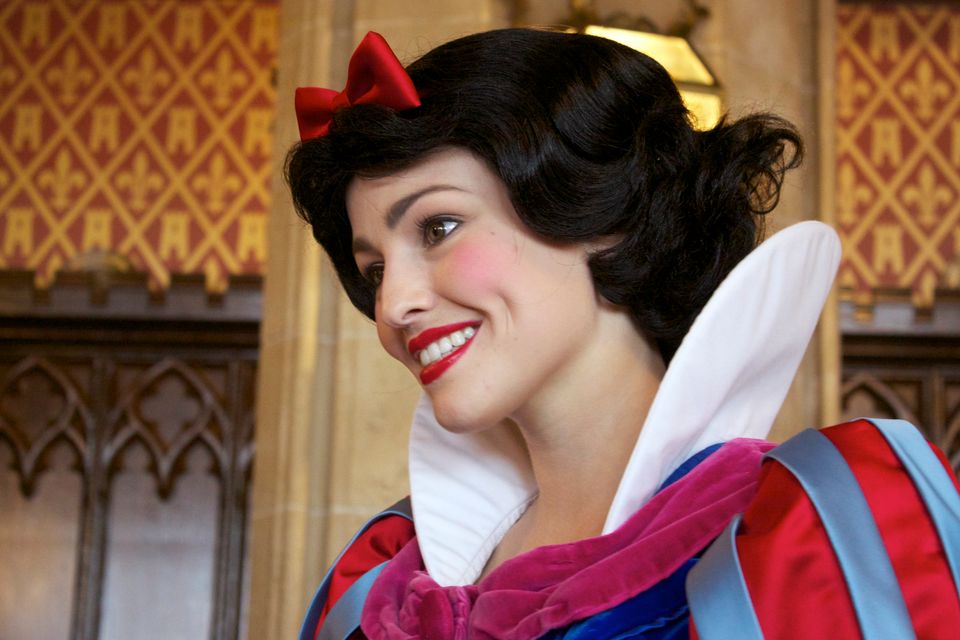 1 / 5
Snow White: The Fraternity Sweetheart
“I don't hang out with girls. I just can't handle the drama. I get along with guys soooo much better.” Sound familiar? That's Snow White. She spends most of her time hanging out at a frat house with her seven best guy friends. Unfortunately, all that socializing is taking a toll. She doesn't always have time to study -- even though she's a nutrition major, she wound up with food poisoning recently when she bit into a bad apple.
<a href="http://www.flickr.com">Flickr</a>:<a href="http://www.flickr.com/photos/64156836@N00/8018561920">wohlford</a>