Alain Passard, celebrated chef, culinary pioneer and owner of the three-star L'Arpège in Paris, is a man of many talents. With a passion for painting and music, he treats cooking as an art form in its truest sense. Even his restaurant is named after a musical term. He has inspired a whole generation of chefs and some of his former protégés have gone on to open their own Michelin-starred restaurants. 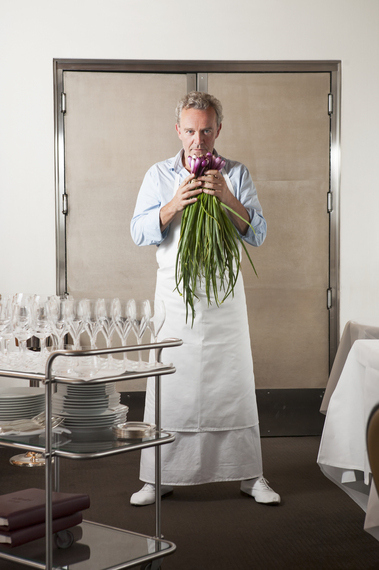 In 2001, Chef Passard created a stir when he removed meats from his menu entirely. He followed that up by purchasing a garden where he grows fresh fruits and vegetables to be used in his restaurants. The garden has since expanded to cover 10 hectares and is managed by 10 gardeners.

In recent years, he has re-introduced meats and fish at L'Arpège, but the focus remains firmly on vegetarian cooking. I was at L'Arpège recently for lunch, and after a lovely meal, settled down with a late afternoon coffee and had the opportunity to meet Chef Passard, who was having his own lunch there after service was done.

Chef Passard is apparently a regular customer, eating lunch and dinner at his restaurant on the weekdays, and over at his massive vegetable garden in Normandy on the weekends.

When asked about the vegetarian-forward concept of the restaurant, the much acclaimed chef preferred not to think of it in those terms. "Il n'ya pas de concept, c'est une cuisine d'un chef." I don't like to think of it as a concept, it's just the food I like to cook" he said. "Painting is one of my passions. So I serve food that helps me channel that passion." That same passion for painting made him keen to work with vegetables, because of their varied colors.

As probably the first chef to shift toward a more vegetarian-focused menu, he had quite a challenge ahead of him. "Perhaps the people were not really ready for it," he remarked with a laugh. But Chef Passard persevered, and now vegetarian menus are a common feature in restaurants worldwide.

However, despite helping to take the world of gastronomy in a new direction, he stays focused on his work and likes to keep a hands-on approach in the kitchen. While he could have a global restaurant chain under his name, he would much rather man the helm at L'Arpège. "I don't see myself anywhere else and it's impossible for me to be in more than one place at the same time. I have been here for the past 30 years and it's the only place I'll ever be," he said. "This restaurant is my home."

Click here to read the full interview on VeggieBuzz.

More from VeggieBuzz:
A veggie-focused review of L'Arpege
A vegan dessert recipe by Chef Alain Passard