He may not spend the afterlife in a pharaoh's tomb, but for Alan Billis, that was never the point. The 61-year-old taxi driver from England made his decision--to be mummified after death--for science.

After being diagnosed with terminal lung cancer, Billis, a father of three, responded to an advertisement seeking a volunteer to be mummified.

“People have been leaving their bodies to science for years," he said of his decision, "and if people don’t volunteer for anything nothing gets found out.”

His wife, Jan, was slightly more skeptical. "You've what?" she said later, reflecting, "And I thought, here we go again. What's going to go on now? It's just the sort of thing you would expect him to do."

When Billis died in January of 2011, Dr. Stephen Buckley and Dr. Jo Fletcher, both archaeology fellows from the University of York, collected his body, intending to preserve it by using the same techniques last practiced by the ancient Egyptians more than 3,000 years ago.

According to the BBC, the mummification techniques used on Billis relied heavily on beeswax, oils, and resins, in addition to long amounts of time in natron, a particularly caustic salt thought to be used by the ancient Egyptians.

The salt drew water out of the body and inhibited the growth of microorganisms, according to Discovery News.

Following the ancient Egyptian custom, most of Alan's organs were removed via a small slit on his left side, reports the Daily Mail, leaving only his brain and heart.

The full results of Alan's mummification will be televised on "I Was Mummified," a Discovery Channel show set to air on Sunday, Oct. 21.

As for Alan, if the researchers performed their jobs correctly, his body may be around for several thousand years.

"It’s for the grandchildren more than anything," he told Metro. "They can tell kids at school: 'My grandad’s a Pharaoh.' That’s my legacy, I suppose." 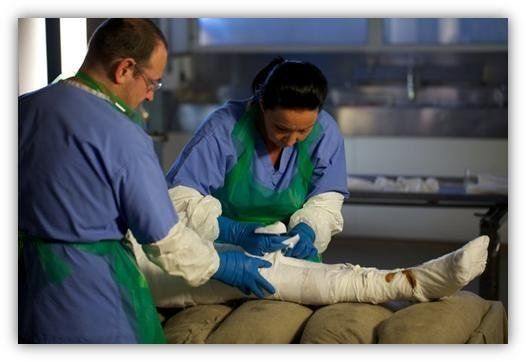 1 / 2
'I Was Mummified'
Discovery Channel