WASHINGTON -- Citing his responsibility to represent the views of his constituents, Rep. Alan Grayson (D-Fla.) said Thursday that he can't support an attack on Syria that his voters strongly oppose.

"One thing that is perfectly clear to me in my district, and I think is true in many other districts from speaking to other members, is that there is no desire, no desire on the part of people to be the world's policeman," Grayson said on SiriusXM's "The Agenda with Ari Rabin-Havt," which aired Thursday morning. "For us to pick up this gauntlet even on the basis of unequivocal evidence of chemical warfare by the Syrian army, deliberately against its own people -- even if there were unequivocal evidence of that -- that's just not what people in my district want."

That doesn't mean that opposition is universal, Grayson allowed. "I did notice, for what it's worth, that the manufacturer of the missiles that would be used has had an incredible run in their stock value in the last 60 days. Raytheon stock is up 20 percent in the past 60 days as the likelihood of the use of their missiles against Syria becomes more likely. So I understand that there is a certain element of our society that does benefit from this, but they're not the people who vote for me, or by the way the people who contribute to my campaign," he said. "Nobody wants this except the military-industrial complex."

Raytheon stock has in fact surged over the past two months, though it's been slightly shy of 20 percent. 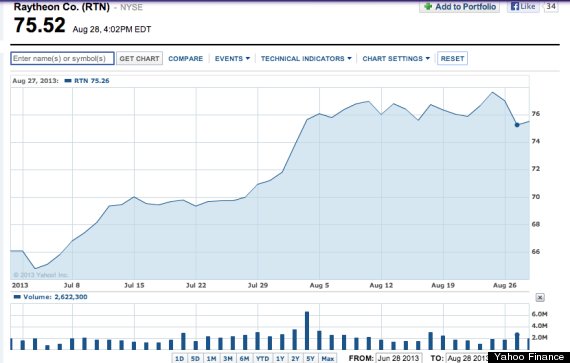 "I take the title of representative seriously. I listen to people, I hear what they have to say. At a time when we are cutting veterans benefits, cutting education, student loans, cutting school budgets, contemplating cutting Social Security and Medicare, I don't see how we can justify spending billions of dollars on an attack like this," Grayson said.

U.S. officials claim Syria's government has killed thousands with chemical weapons, but the American public mostly opposes any U.S. intervention in the war in Syria, according to the new HuffPost/YouGov poll.

Fifty-nine percent of respondents said they believe Syria has used chemical weapons against rebels, but they were about evenly divided on what the U.S. response should be.

Only a quarter of Americans support air strikes to aid rebels in Syria, according to the latest HuffPost/YouGov poll -- though that support has risen since two previous HuffPost/YouGov polls (here, in April, and here, in June). Forty-one percent oppose them.