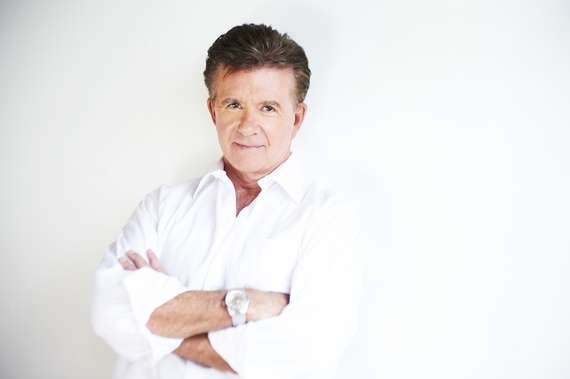 Alan Thicke, the famous father, Jason Seaver on Growing Pains, is on the short list of top TV dads. After the series, he continued his humorous take on fatherhood with two books: How Men Have Babies and How to Raise Kids Who Won't Hate You.

Each of Thicke's sons has some connection to show business: "All of them have been exposed to my career and my life and they see it by example and they know that show business is a lot of fun when it's going well... I'd be happy if they were orthodontists because straightening teeth will be around forever and show business can be fickle, but I also tell them to follow their dreams to the last drop ... just don't be stupid about it," says Thicke.

Musician Robin Thicke is the most well known with his breakout, mega hit, "Blurred Lines," as well as his seventh studio album, Paula based on an anguishing separation from his wife.

Currently, Alan Thicke stars in the Canadian-produced reality sitcom, Unusually Thicke, together with his third wife Tanya and his youngest son, Carter. Thicke's oldest son, Brennan was a voice-over artist and now owns a medical marijuana dispensary in California.

In an interview, I talked with Thicke who, by the way, has this great, strong, resonating voice that would have been perfect had he chosen to be an overbearing dad, however, as you'll see, was not the case...

What is the best advice about parenting you have received?
Eat carrots. Finish your vegetables. And from my dad -- work ethic.

Describe yourself as a father.
My kids would say too laid-back, permissive and trusting. I was not strict at all and occasionally that bites you in the butt. But generally speaking, I'm pretty happy with my kids.

You wrote a couple of very funny books about fatherhood. Did you use humor as a dad to diffuse situations?
We always tried to diffuse situations with humor, both when they were kids and certainly now with the challenges of adulthood. Sometimes it's a dark, bleak, black sense of humor and that has paid off for us.

Most recently with Carter, when he was around 4 and his mother and I were divorcing, he could be a little sour and take himself very seriously. We made a very conscious effort to have him lighten up and have a little fun with the world.

How much or little involvement do you think a father should have in their adult children's lives? Would you describe your relationship with your sons as close?
Every day, every, single day. It never goes away and I like it that way because it's mostly good news. And yes, my relationship with my sons is very close. I'm in touch with or engaged with at least one of them every single day. Worst case scenario it's every third day for any one of those kids.

If you've been involved with them as kids, you'll be involved with them until the day you die. In fact the stakes just get higher. Instead of deciding what movie you are going to see or how late they can stay out, as adults now you're dealing with their careers, their health, their own children, their marriages, their finances -- everything about their lives.

What advice have you given to Robin during the separation from his wife?
My advice to Robin is listen to your heart, do what you feel. Follow your heart in love and marriage as you would in careers and you'll be fine. Robin has a great heart. He's a fabulous father. He obviously followed his heart in creating and devoting an entire album to Paula and I believe you can't go wrong that way.

The culture has changed a lot between your oldest son and your youngest. Do you feel it's changed your parenting style? What do you tell Carter about issues like social media, hook-up culture and drugs and alcohol?
I try not to micro-manage and have a bit of a don't ask, don't tell approach that relates to Carter's sex life at least -- kids don't really want to talk to their dads about the details of that. I've never confronted him and asked, 'Are you a virgin? Are you sexually active?' I assume that he will be sooner or later so we talk about respecting women and being faithful in relationships... no surprise pregnancies... and STD's.

In terms of social media, I try to have my voice heard loudly in the cacophony of other influences whether from television and the Internet or social media... I want my voice to be heard in terms of the standards and values that I try to pass on to my kids.

What do you worry about as a father?
Well, probably more in this generation than ever before social media exposes kids to so much, they have many more things to make decisions about and to censor themselves about.

How did you tell your sons to deal with bullies?
My kids are all pretty big and tough and strong and I don't worry about them being bullied -- the reverse, be kind to people and don't ever be a bully yourself and I think they've followed that. Both emotional bullying and physical bullying -- I don't think have been a part of their background at all.

How did the way you were parented affect your parenting?
The way I was parented did affect my parenting -- probably in the reverse. My Dad was pretty strict and the next generation probably wants to be less strict. Consequently, I think my kids Robin and Brennan are fairly strict with theirs because I think it's fairly common that the next generation does something a little different -- diametrically opposed to the way they were parented.