It was Ed Wynn for the win this Saturday at the Annies. As Suburgatory star Alan Tudyk -- who used Wynn's comic persona as the inspiration for his vocal performance as King Candy in Wreck-It Ralph -- wound up beating out Adam Sandler and Jude Law for this year's Voice Acting in an Animated Feature Production award.

Mind you, what makes Tudyk's King Candy win all the sweeter is that he wasn't actually Walt Disney Animation Studio's first choice to voice this character.

"There was another actor that they had originally wanted for King Candy. But due to scheduling conflicts, he couldn't make it to the first reading of this script back in April of 2010," Alan recalled during a recent phone interview. "That's when my agent Britney began insisting that I be allowed to fill in for this guy, saying 'Wait 'til you hear what Alan can do with this part.'"

And Tudyk's agent aggressively going to bat for him must have worked.Next thing you know, he found himself on a flight to San Francisco with Sarah Silverman and Jane Lynch, where they then got a tour of the Pixar Animation Studios campus.

"I'm a big ol' nerd when it comes to animation. So getting the chance to go behind-the-scenes at Pixar, touring the offices there as well as getting to see scenes from Toy Story 3 months before that movie was released to theaters, that was honestly more exciting for me than getting to take part in the initial reading of the Wreck-It Ralph script," Tudyk said.

But clearly the Disney and Pixar executives who sat in on this April 2010 reading were impressed with Alan's take on King Candy. Tudyk remembers John Lasseter coming up to him once this Wreck-It Ralph reading was completed and giving him a big hug. And sometime after that, Alan was working with director Rich Moore, recording dialogue for (SPOILERS AHEAD) the comic villain of this Walt Disney Animation Studios production.

"Now, you have to understand that Wreck-It Ralph had been in production for quite a while before Rich and his story team then decided to merge the King Candy / Turbo storylines and then turn those two characters into a single villain," Tudyk explained. "Up until then, King Candy was just this uptight monarch who wanted everything to be just so in the Sugar Rush game."

Now Alan has played bad guys before (for example, the evil Alpha on Fox's Dollhouse). But even though he already recorded all of King Candy's dialogue, Tudyk was still surprised by how mean Moore and the Wreck-It Ralph production team wound up making this character in the finished version of this movie.

"When I finally got to see the completed film, and here's King Candy ramming Vanellope's car off the road and then attacking her with a cane, I have to admit that I was kind of surprised," Alan stated. "I mean, I knew that he was supposed to be a bad guy. But I didn't know that he was going to wind up being that scary." 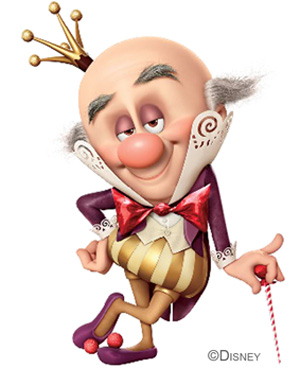 To be honest, Tudyk kind of misses the earlier version of King Candy. Back when this character really did harken back to Ed Wynn and his Perfect Fool persona.

"There was this joke in an early version of the Wreck-It Ralph script where -- right after Ralph comes in and disrupts Vanellope's initial attempt to enter the Sugar Rush race. King Candy turned to all of the spectators in the stands, who now are rioting because they think the race isn't going to happen. And the King cries out 'Stop! There'll be no race riots here!' " Alan laughed.

That was a joke that both Rich and I loved, something for the adults in the audience that would hopefully sail over the heads of the kids. But in the end, we wound up cutting that gag because we didn't want to distract people from what was going on in Wreck-It Ralph's story at that point in the story.

Speaking of villains and race, Tudyk will be adding to his rogues gallery in April when he plays Ben Chapman in 42, the upcoming Warner Bros. release which will detail how baseball legend Jackie Robinson broke the color barrier back in 1947. When I asked why he'd ever considered playing such a notorious racist as Chapman (who -- as the manager of the Philadelphia Phillies -- became infamous for the way that he'd bait Robinson from the Phillies dugout), Alan had a very simple answer.

"Brian Helgeland -- the writer and director of 42 -- helped me break into movies when he hired me to appear in A Knight's Tale back in 2000. So I kind of owe him," Tudyk explained.

More to the point, Brian didn't want Ben to be seen in 42 as just this one dimensional villain. He asked me to play this part because he thought that I could maybe capture Chapman's duality. Show people how Ben could be seen as this good ol' boy by members of the press back then but still be this awful racist.

It was the challenge of playing someone as complex as Ben Chapman that ultimately convinced Alan to sign on to appear in 42. But to be honest, Tudyk found voicing King Candy in Wreck-It Ralph pretty challenging as well.

"I've done voicework for animated features before. You can hear me voicing minor characters in three of the four Ice Age movies. But King Candy is the first character that I've had in an animated feature which has some real meat on his bones," Alan enthused. "I'd love to get the chance to voice this character again."

Which may be fairly difficult. Given that (SPOILERS AHEAD) the Cybug version of King Candy meets a pretty grisly fate as he flies into the light at the end of Wreck-It Ralph.

What's particularly tough about this animated character's demise is -- just like what happened with Tudyk's Firefly character (i.e. Wash was killed off in "Serenity," the big screen version of this sci-fi television series) -- that then mean Alan can't return to voice / play this same character in any follow-up films. Which has to have been tough over the past week when Joss Whedon first talked about how he was toying with producing a "Serenity" sequel after he finished working on Marvel's The Avengers 2 and then Rich Moore talked about he, John C. Reilly and Sarah Silverman are itching to get started on Wreck-It Ralph 2.

"Yeah, it sucks to be the one who can't come back for the sequel," Tudyk mused. "But getting nominated for an Annie -- to get that sort of recognition from your peers -- that does take away some of the sting."