Lyrically unafraid, emotionally empowered, vocally gifted and unique, Alanis Morissette has woven herself and her music into pop culture by supplying perfect breakup songs, angry anthems, emotionally complex ballads and life from an alpha-woman's musical point of view since Jagged Little Pill in 1996. Now, in 2012, Havoc and Bright Lights is going to show the world a more grown up Morissette, still questioning, still searching, still hoping but from a place of a woman in love.

That love surfaces many times during a listening party sponsored by Target and Sonos at the Sonos Studio on La Brea in Los Angeles, Calif. recently. Sonos manufactures and sells incredible streaming audio consoles controlled by iPads, iPhones and other devices that rival Bose in style and are almost unequalled in sound. In all fairness, I have two at home and use them to listen to all streaming content, my music library, radio, Spotify, Sirius... if it's available, Sonos can basically stream it. Target is working with Morissette on the album making bonus tracks available to those that purchase the CD in the stores.

When asked about goals, or great accomplishments, Morissette is quick to go to family.

Some of the songs from Morissette's breakthrough album, Jagged Little Pill came from her journal, actual journal entries, sometimes word for word. Not so much this time.

"I spent a lot of time thinking about what I wanted this album to be, what I wanted to say and how," she went on. "None of from my journal this time, but from different places in my life, different experiences."

From the album's first track "Guardian" to the final "Edge of Evolution," Havoc and Bright Lights is another musical journey only Morissette could provide. "Woman Down" harkens back to the Morissette of the last Millennium but in a new world while "empathy" and "numb" get inside the complexities of emotional entanglements.

"Celebrity" is a song that takes on those always seeking fame; but fame is not lost on Morissette.

"I'm as shallow as you can be," she laughed, as the 150 or so journalists, contest winners, industry people gathered around the small stage setup up just feet from La Brea's busy traffic behind the glass. It's a gallery type setting, appropriate for this artist to display herself and her new album, and her shoes. "I mean, I love my 16" heels like the next girl."

But this is a more optimistic Morissette. As Billboard magazine's Phil Gallo quizzed her for 35 minutes there were many upbeat messages heard from this outspoken musician and actress.

"Now is a GREAT time to be a woman, especially an alpha-woman," she stated. It's a role she clearly enjoys, and she doesn't shy from fame. "Paparazzi aren't such a bad thing at times, they keep us transparent. I long for the day when things like divorce, breakups, relationship issues and all the dramas of life won't be so interesting to people, but it is now, and that's the world we as entertainers live in. Being an artist gives us a voice, and we should use it. Musicians are social activists," she added.

But then that love shines through again. "Of course, being a parent is the most important and best kind of activism on the planet," she concluded.

After 35 minutes of talk we were treated to four cuts from Havoc and Bright Lights. "Big Sur" is only available from the CD at Target and is a track Morissette loves.

"Big Sur, the place, is so incredible. So many artists of all kinds have gone there for crazy inspiration, myself included," she stated of this Northern California Coastal enclave.

Then Morissette treated everyone to a mini-three song concert, just her, a microphone, and two guitarists. In the world of auto-tuned everything, explosions, 754 dancers, two jumbotrons and a smoke machine just for one dance single it was refreshing to be reminded that true talent, true artistry just needs a stage, a mike and a way to make music.

Make music she did. She opened with "Hand in My Pocket" but actually had a harmonica in hers which she played to great applause. She then went in to an acoustic version of "Guardian" from the new album which gave the song new life and nuances. She closed with a heartfelt rendition of "Thank You" which she dedicated to her family, her staff, her friends, and the audience.

It's not easy for a woman in music, particularly and opinionated one. It's not easy to be an artist in the world of free access to everything, singers that can't and those seeking fame more than substance. Morissette manages to navigate those waters and in a room not much larger than my living room she managed to impress and enrapture everyone in the room. Not easy at an industry event. But then again, nothing about her life or her music is easy; it's all complex, nuanced, edgy.

Havoc and Bright Lights could best describe the last 16 years of her life, but she's emerged happier, stronger, more confident both musically and personally, than ever.

Here's the live version of "Thank You" from the Sonos event. Excuse me harmonizing, but it was shot on my iPhone 4s and uploaded to SocialCam before she left the stage. Ahh, the internet.

Video by Karel: Morissette talks and then sings "Thank You" at Sonos Studio Los Angeles 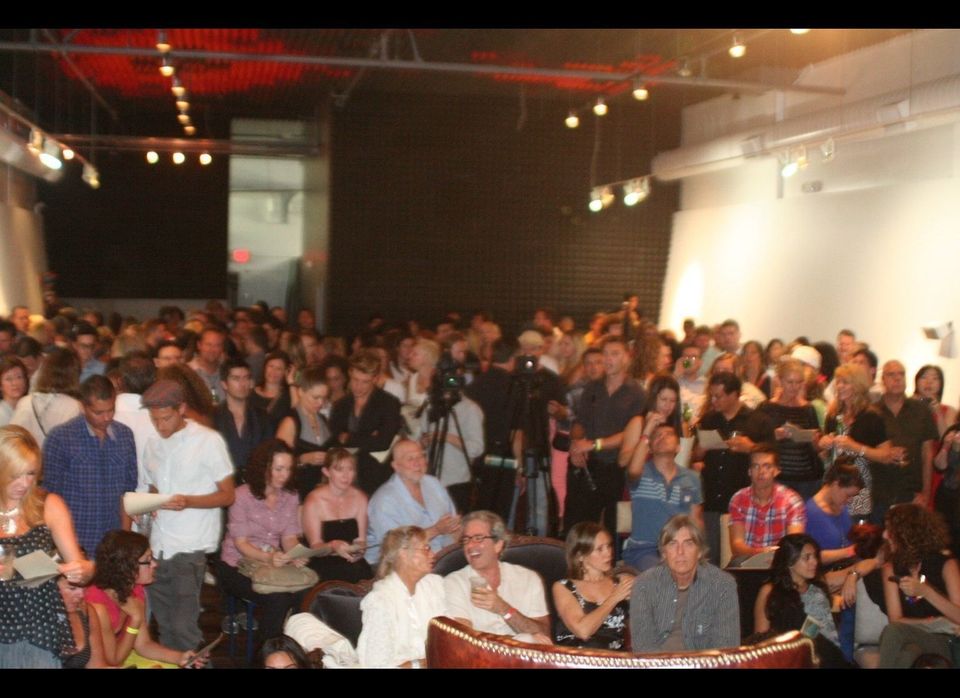