It's probably superfluous to mention that there's a giant profile of Katie Couric in New York magazine this weekend by Big Three Anchor Specialist Joe Hagan (coming up, Brian Williams!) — by now you've probably dropped everything you were doing as instructed by TVNewser and devoured everyone of its 6,280 words (incredibly, not one of them was "perky"). If you haven't, though, you might have been one of those people to be completely and utterly misled by the blaring — and incomplete — coverline:

"I have days when I'm like, oh my God, what did I do?" Katie Couric's Impossible Year

This implies that the year has been so bad that Couric is regularly seized with bitter regret. And yet, consider the full excerpt, which by the way concludes the piece:

It makes you wonder if she doesn't have days when she wakes up and wishes she hadn't jumped to CBS News. "I mean, of course. I'm human. I'm not going around, 'Dee-da dee-da dee,'" she says. "I have days when I'm like, 'Oh my God, what did I do?'"
She pauses.
"But for some weird reason, they don't happen that often."
She summons a smile. Even now, her optimism is irrepressible.

Did she say it? Sure. Is it an accurate representation of her state of mind (or at least her stated state of mind)? Well, no — not if she's optimistic and, "for some weird reason" not having too many moments of second-guessing. Of course, "Katie Couric Is Serene And Optimistic" makes for a far less dramatic coverline than, "Oh, my God, what did I do?" but hey, whatever sells, right?

Here's something else that sells: Huge close-up shots of the faces of women who are older in very high-def. That is to say, they're not selling Maxim, but in articles about Women Of A Certain Age (Hillary Clinton springs to mind), the full-faced super-high-def close up, complete with powdered-in pores and 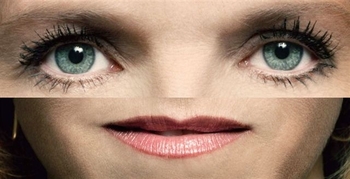 wrinkles and clumpy lashes and absurdly painted-on looking lips, seems to be a trademark. (NB: I can't really cite any examples here, so let me say that this is more a statement of my impression, not of exhaustive research.) What this means is hard to say — it's not like women are alone in getting the close-up treatment (cf. Mark Warner on the cover of the NYT mag last year), but there seems to be a particular fascination with running photos showing female faces with that kind of emphasis (some of it could be bad makeup; but generally, makeup is applied to enhance and blend and be viewed from a respectable distance, rather than stand out from a minutely-focused distance. And people like Hillary Clinton and Katie Couric know their way around good makeup). In any case, it's something I noticed; I also doubt whether a pullquote from Williams or Charlie Gibson would include the phrase "I'm like," but then again, it's harder to imagine them saying it. I offer these up as observations.

I also offer these up as my take on the best/juiciest quotes — Hagan has gotten some good stuff here, some really good stuff. A sampling:
Katie Couric Learns What Happens When Great Expectations Go Unmet
[NY Mag]

*Alternative title for this post: "Sputum? But I Don't Even Know 'Em!"