A recent Demos article, authored by Matt Bruenig, caught me completely off guard. It was entitled, "A Spectre is Haunting Alaska - the Spectre of Communism."

"Oh, great," I said, posting the link to Facebook. "The Lower 48 is arguing whether or not Alaska is a communist utopia again."

Spoilers: we're not. But we have managed to get a few things right along the way, going into our 55th year of statehood. The Permanent Fund might be our biggest success. But the other stuff we get right rarely make the headlines.

Bruenig's article was a tongue-in-cheek defense of another article that dominated the blogosphere during the first week of 2014: Jesse Myerson's Rolling Stone column, "Five Economic Reforms Millennials Should Be Fighting For."

Myerson injected Alaska into the discussion by proposing that the federal government distribute (or redistribute) the wealth by way of "Social Security for All." The government would invest in the stock market. The interest gained on the state's portfolio would then be paid out to the people, regardless of employment status, in the form of a universal basic income (UBI). In practice, this would take the form of a yearly dividend check for every citizen, based off the profitability of the stock portfolio managed by the state.

Thanks for the profoundly horrible metric. Let's move on.

Right-wing media has been less than receptive to the proposals, in large part due to the description "#FULLCOMMUNISM" featured on Myerson's Twitter account (always the perfect set up for a rational dialog). They decided to make a very loud and very panicked news cycle out of one of our most treasured red herrings.

The left found the perfect wrench to throw into the conservative panic-by-numbers schtick: It's not insane economic policy, because... Alaska!

A deep red state can't be communist, right? But here's the Last Frontier -- the destination vacation of the Tea Party and the land of Sarah Palin (occasionally) -- with a system that looks identical to, as Jonah Goldberg phrased it, "the affluent and fashionably rebellious young" Jesse Myerson's Soviet wet dream.

Were Jesse Myerson's proposals inseparable from Soviet imperialism, incriminating the Republican stronghold of Alaska as guilty of the same crimes? Or were these suggestions already being applied in the United States, thus revealing the hysteria of the right's response (while hinting at the legitimacy of policies that challenge the purity tests of the far right)?

The Alaska Permanent Fund isn't popularly associated with Communism, and shouldn't be.

The Fund was established in 1976, by Republican Governor Jay Hammond. It does at a state level approximately what Myerson suggests the feds should do: A quarter or more of annual oil revenues are put into a state investment account, which is managed by a board of trustees who invest in stocks, bonds, real property and other investment vehicles. The principal $734,000 has blossomed into an amount eclipsing the $40 billion mark. Every year, a dividend check is paid to all residents who have lived in-state for at least one year, based on a five-year average of the fund's valuation.

Last Tuesday, on Chris Hayes' MSNBC show, Myerson took his policy proposals about UBI even further by suggesting that priority of payouts could be given, in higher amounts, to those who need it. This was also proposed by former Alaska state senator Joe Josephson during the debate over the dividend payouts, which he thought should be prioritized according to economic necessity. His proposal only received three votes. "Lincoln said that God loved poor people so much -- he made so many of them," Josephson told me back in 2012. "He must not have loved them as much the day I put my idea forward."

The Supreme Court ultimately killed hopes of any future preferential payout proposals. In Zobel v. Williams, Supreme Court Chief Justice Warren Burger decided that awarding dividend checks according to time of residency was unconstitutional under the equal protection clause of the 14th Amendment.

Under Soviet communism, the state is the sole decider of how much an individual is paid -- to each according to his need -- which is completely arbitrary. Under the Alaska and the U.S. Constitution, the state is not in charge of such determination. They just manage the account, through a state-owned corporation.

It's still a sweet deal. But Communism it is not.

Cable news acts like Alaska's Permanent Fund descended directly from Stalinism. It did not. And we call the model by a different name: the "Owner State."

Republican Governor Wally Hickel coined the term, inspired by our state constitution and in particular two of its provisions:

Article 1, Section 1: Inherent Rights. This constitution is dedicated to the principles that all persons have a natural right to life, liberty, the pursuit of happiness, and the enjoyment of the rewards of their own industry; that all persons are equal and entitled to equal rights, opportunities, and protection under the law; and that all persons have corresponding obligations to the people and to the state. [emphasis added]

Article 8, Section 1: Natural Resources, Statement of Policy. It is the policy of the State to encourage the settlement of its land and the development of its resources by making them available for the maximum use consistent with the public interest.

The Owner State model was born out of Alaska's colonial roots; resources being extracted by outside fishing interests. That evolved into the only protection flimsily holding the line against the oil companies today.

His father sought to spread the model to other countries. In a 2009 video message to a conference in Durban, South Africa, a 90-year-old Wally Hickel was still trying to spread what was working in Alaska.

In Alaska, we live on the commons. We benefit from the commons. We care for the commons. From common ownership of our land and our resources, has emerged a new model for modern society. We call ourselves the Owner State. And what we own is the commons. We believe our model surpasses both capitalism and socialism. When this approach is understood, worldwide, there will be no legitimate reason for poverty; especially in Africa, a continent so rich in resources. This year, Alaska marks its 50th anniversary as one of the 50 United States. But we are different from all the others. Prior to statehood, we were a colony, and a helpless victim of mining, fishing, and shipping monopolies. They plundered our resources, and left our people ignorant and in poverty. Just as multinationals today plunder South America, Asia, and Africa, sucking the wealth from the resource-rich wealth commons, leaving the rightful owners hungry and destitute... I urge you to study the building blocks of the Owner State. We are far from perfect, but our experience can be helpful as you reclaim your commons. 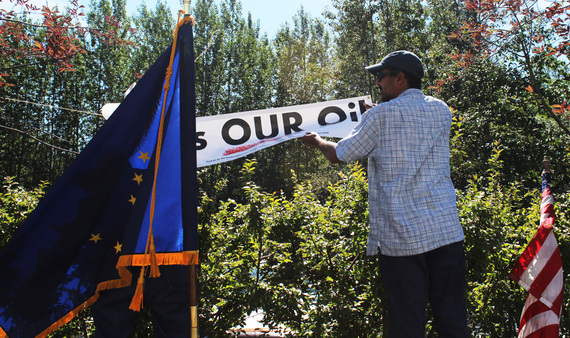 Beyond the spectre haunting the left and the right is a model of self governance, rich in conservative and progressive history alike, enacted to guide Alaska through dark times without having to forfeit ownership. That seems to have completely eluded the current war over whether or not Alaska is Communist.

Governor Hammond once defended the Owner State from such disparaging false accusations (though obviously bending the truth -- in much the same way as Myerson -- the other way, to fit his chosen narrative):

Socialism is government taking from a wealthy few to provide what government thinks is best for all. The Permanent Fund dividends do just the opposite. They take from money which, by constitutional mandate, belongs to all and allows each individual to determine how to spend some of his or her share. What could be more capitalistic?

Alaska is an Owner State. We came up with something better. And we should be fighting to keep that vision just as hard, or harder, as the people trying to use us as a wedge issue to fit their narratives.