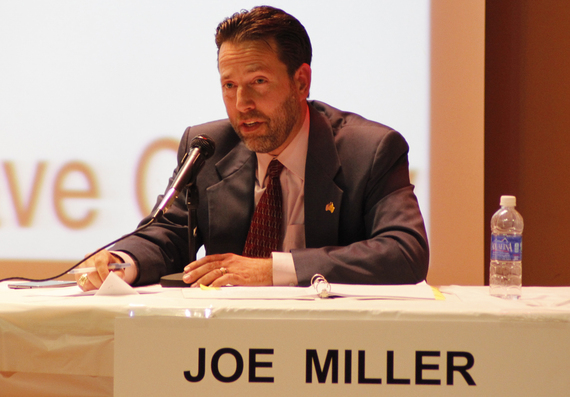 Joe Miller has a knack for Republican primaries. Obviously, there's a small sample size (one), but 2010's unlikely upset over Senator Lisa Murkowski -- as slim as the margin of victory was -- proved a successful strategy through a primary exploit. Miller found that he could overcome the odds by running as far to the right as possible, as loudly as he could.

The general election returned Murkowski to Washington, D.C., and Miller now finds himself in his second run, this time attempting to overcome yet another slate of primary challengers currently polling above him.

But if Miller is sweating the support deficit, it's not showing. And in a typical showing from the tea party candidate, a forum in Anchorage last week featured Miller sticking to his script. Applause lines were commonplace, as he called for abolishing the IRS, repealing Obamacare, nullifying federal laws, and saving the country from the tyrannical rule of President Barack Obama and Senate Majority Leader Harry Reid. All of which is standard fare within Republican primary politics, as candidates push the measuring stick further to the right to rally their base and separate themselves from their opponents.

A distinction needs to be made, however, between aspirational campaign speak used to solicit support, and outright false information that misleads voters and promulgates false information. When asked last week to share his vision of America that he would like to leave to the next generation, Miller fell on the latter side of the fence last week. Speaking to the crowd of a couple of hundred in Anchorage, he answered:

The number one priority is to end the horror of abortion in this country. We've slaughtered 56 million children in this country, and it's even worse than that. Part of our technology has been involved with 1 billion plus that have been slaughtered worldwide. It is something that we will reap, in fact we are reaping right now, the consequences of. We have a country right now that we can't keep up on the Social Security demands. Why? Because we've slaughtered generations. Literally.

The call to criminalize abortion drew applause and a few shouts of approval, and Miller moved on to other topics.

There are many small changes that could stave off such cuts and make the program sustainable (there have been little changes since the Greenspan Commission in 1983). Senator Marco Rubio (R-Florida) has proposed raising the retirement age and reducing the growth of benefits for more affluent seniors. The Simpson-Bowles commission recommended increasing the cap on high-income earners, which currently cuts off taxing any income over $113,700. Sen. Begich introduced similar legislation last year.

Social Security funding is not on a sustainable path and demands legislative redress. But the immediacy, assigned by Miller, is problematic. More troublesome, however, is the incorrect assertion that the trajectory of Social Security costs has the slightest thing to do with abortion -- let alone serves as the prime aggravating factor.

The claim has been made more than once; Rick Santorum dusted it off in 2011, struggling to gain traction with primary voters during his failed presidential bid. But the idea first made its way into headlines back in 2007, from another Miller -- former U.S. Senator Zell Miller (D-Georgia). He painted with a much broader but similarly inaccurate brush: "Over 45 million since Roe v. Wade in 1973," Miller told a pro-life gathering in Macon, Georgia. "If those 45 million children had lived, today they would be defending our country, they would be filling our jobs, they would be paying into Social Security[.]"

The comment rightly drew a lot of scrutiny, including from Freakonomics author and economist Steven Levitt, who has worked extensively on links between legalized abortion and crime statistics. Levitt remarked at the time that (Zell) Miller's findings were not dissimilar to his research, which found that legalized abortion reduced the number of unwanted children, and that had a correlating affect of reducing crime. But:

Miller, however, makes a key mistake in his logic. While it is true there have been many millions of abortions... even if those abortions had not occurred, there would not be that many more Americans today. The reason is that the primary impact of an abortion is not to reduce a woman's lifetime number of children born, but rather, to simply shift the timing of a woman's fertility from early in life to later in life.... I would estimate that each teenage abortion reduces lifetime babies born to the mother by maybe one-tenth of a child, or possibly even less. (For a woman who gets an abortion in her forties, the impact is obviously larger, but there are very few of those type of abortions.) The key to our abortion argument is that women shift their births to a time when they can better care for the children.

Both Millers' assertion that entire "generations" have been removed from paying into Social Security, causing its future funding problems, because of abortion is false.

For points of comparison, we can use Zell Miller's accompanying claim that, in the U.S., "3,700 babies are killed every single day[.]" That statistic is, in itself, hard to verify. The Guttmacher Institute puts the figure closer to 2,900 (the abortion rate has been declining steadily from its spike in the early 1980s; 2011 showed abortion reaching its lowest level since 1973). Fifty-one percent of women who terminate pregnancies are 24 and under, supporting Levitt's finding that these women will likely give birth later in their lives. If terminated pregnancies are to be blamed for the lack of new citizens paying into Social Security, one should also note that 6,717 Americans have lost their lives in the wars in Iraq and Afghanistan. Over 30,000 Americans die in automobile accidents every year, and from 1963 to 1991 that annual figure was above 40,000. Over 3,000 Americans die each year from the common flu.

To be clear, this is not to equate abortion with war, fatal car crashes, or physical illness. But to isolate abortion as the primary driver of Social Security's insolvency is ludicrous and rife with nefarious intent.

Abortion is a really difficult and complicated issue. Choice is hard. Life is hard. But Miller has abandoned complexity in lieu of irresponsible soundbites. To make such a wildly inaccurate policy statement, purposefully and solely for short-term political gain, is a reprehensible breach of ethics and is beneath even the basement level of politics we associate with the modern day campaign. He's taking the easy, angry road. We shouldn't allow ourselves to be dragged along for the ride.