Votes are still being counted in Alaska, where GOP nominee Joe Miller is clinging to thin hopes that he will be able to get enough write-in votes disqualified so that he can make good on all of that premature drape-measuring and apartment-hunting he was bragging about doing prior to Election Day. Workers continue to comb through the write-ins, and what they're encountering runs the gamut of the write-in experience: close misspellings, unexpected names, joke votes...plus a healthy number of ballots that the Miller campaign is challenging for no discernible reason.

Only two people have ever won a write-in campaign to the U.S. Senate: South Carolina's Strom Thurmond in 1954, and California's William Knowland in 1946 -- who ran in an all-write-in special election for a two-month term. So something historic may be brewing up in The Last Frontier, but behind that backdrop, the ballot counters doing the nuts-and-bolts work are encountering their fair share of high weirdness. We've rounded up some of the behind-the-scenes highlights to commemorate this time in our lives. 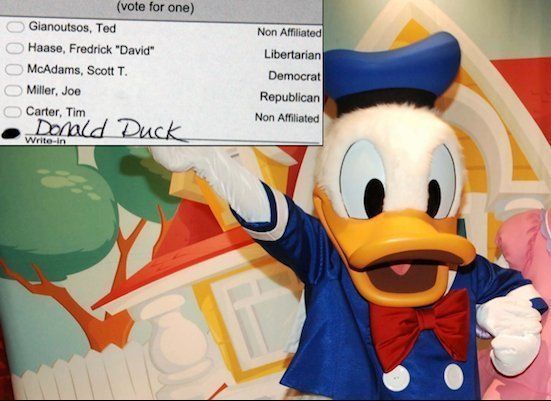