Having the opportunity to travel the world through out my life, I've been to a number of wonderfully exciting places. After visiting 15 unique cities on my most recent trip to Albania (and acquiring dual-citizenship), I wanted to share my experience with Lonely Planet's #1 Travel Destination of 2011.

I'm an Albanian-Danish-American from Boston. Those who know me, know that I take great pride in being a Bostonian. However, I have always been curious about Albania and fascinated by my mysterious "orphan" country, one that was was hardly ever spoken of. My father, Philip, was raised in the multicultural Boston South End, by parents George and Villermini Dushku, who immigrated to America by boat from this small Balkan country in the early 1920's. I never knew these grandparents. They passed on before I was born. I never had strong feelings of attachment to Albania nor to the small city of Korce where they were from but the feelings grew with me. Here is the story. 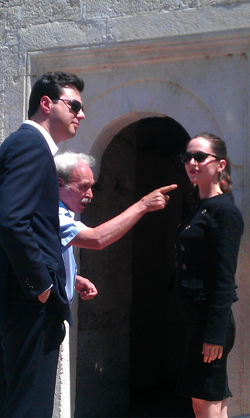 As I began to garner attention in my acting career, Albanians quickly began to take notice that one of their own was rising in the entertainment world... rare, and I was not a Belushi! Even earlier, someone around home would look at me and say, in an accented voice, "You are Albanian!" And another time the whole family went to see the Italian-Albanian film l'Amerika. When the camera slowly panned over the deck of an old freighter crowded with Albanian immigrants I saw in the close-ups faces very much like my father's, my brother's, and myself.

My first invitation to travel to Albania came in 2004, when I was approached by a well-known Albanian-American photographer, Fadil Berisha, after he tracked me down in New York City where I was performing in an Off-Broadway play. Fadil is currently the official photographer for Rolex, Miss Universe, and Miss USA. He has shot for Elle, Vogue, Mademoiselle, etc. and is very famous amongst Albanians for his vast advocacy work. He told me that my grandparents' "Mother Land" had been calling for me, that I had become somewhat of a national heroine and that he wanted to bring me "home" for a visit. My father, two brothers and I obliged, and our first trip to Albania was both fascinating & exciting. I've seen few places as beautiful as Albania -- located across the Adriatic and Ionian Seas from the heel of Italy -- the country that Lonely Planet named the #1 travel destination for 2011 -- but is also known for its prideful isolation and two full generations of Communism in its belly. 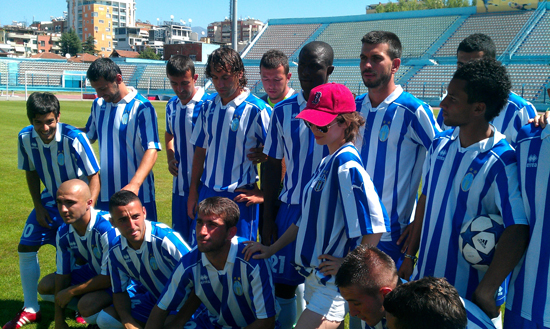 Upon returning home to the United States, I felt something deeper than my initial curiosity. I wanted to "understand" Albania, to try in some way to capture and share the experience we had, the connection we found, with the rest of the world. The idea to make a documentary film about Albania promoting tourism & travel to the country was conceived by Fadil Berisha, my brother Nate Dushku and myself. Once we talked about the film, it had to be done. It became a labor of love. We have been calling it our "Love Letter to Albania." Little did I know, I would return home a dual-citizen of the country.

Now, looking back at the recent weeks we've spent there, I feel foolish for anticipating I could understand Albania in less than a life time, but the process has been exciting, and at the same time humbling. 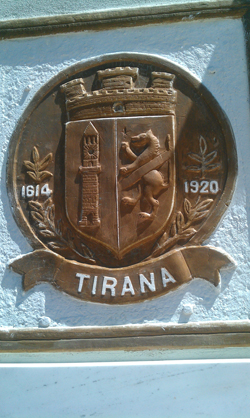 I can only begin to explain the diversity I found once I tried to take in more than the fabulous beaches, the fascinating mountain villages -- each with its own hundreds of years of stories to uncover. It is an adventure that I am reveling in, realizing that I will go back many more times and still feel superficial saying that at last I understand Albanians.

One could say the same things about Italy, Greece, and Croatia, as those who have been to these richly historic, yet presently exquisite places will attest. Some might begin with a tour ship that ports at different islands, known for black sand beaches or volcanoes -- but if you linger at any place, you discover new and powerful meanings. When I was a little girl during my first trip to Greece, we woke up in a tiny village and walked across the street for breakfast not knowing that we deeply offended our host family by choosing the restaurant on the wrong corner. We unknowingly entered into a dispute going back to the interwar period between fascists and communists. When we asked how this could still matter, we found that to our friends it was as if it happened yesterday. Blind tourist? Or the beginning of a big lesson that came back to me as I sat on a rock on an Albania beach and looked up at an ancient ruin on the mountainside. I knew there were stories to be found, if I could find the right people.

Out of the gate we were determined to make our Albania documentary sleek, stylish, colorful and cinematic. The project would incorporate brazen personalities, stunning imagery and cultural touchstones such as food, music, fashion, sports and nightlife, all the while managing to touch upon Albanian customs and the environmental, socio-economic, and political issues facing the country today. My taste for adventure would set the tone for a fast-paced vacation, which indeed it was. 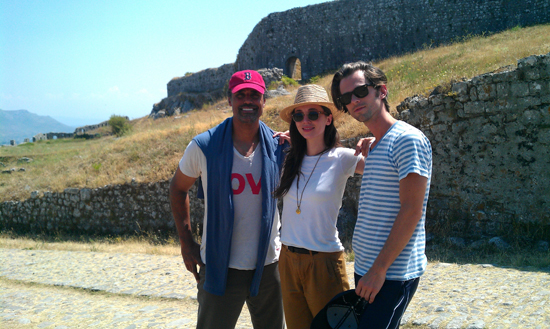 As we forged through town and country, basking in the sunshine of natural beauty and feeding off the energy of the Albanian people, we could relish the contemporary night spots and sexy boutiques, but we couldn't help wanting more. We stormed the vivacious capital city of Tirana and then the beach towns and islands of the Albanian Riviera, traveling up to the rugged villages of the Albanian Alps and over the border to Macedonia, and to the city of Pristina, the youth-driven capital city of the disputed country of Kosova, all inhabited primarily by Albanians. My travel companions were -- my brother Nate, my boyfriend Rick Fox, our three-man American crew, and an exuberant Albanian entourage of additional cameramen, kind guards, planners and helpers. Luckily our guide was my beloved friend Fadil Berisha, also cousin to Albania's Prime Minister Sali Berisha which helped in providing access to governmental, media, and social outlets throughout the country. We stopped in 15 cities, every spot we savored, and left hungry for more of what we had taken in.

"It gets under your skin." My "Albanian-ness" goes deeper as I spend time there. The more often I go, the more I realize there is more to the story. There are so many stories to tell -- most are full of a kind of ancient mystery that requires a wider and deeper lens. I did feel something quite different on this trip to the "Home Country." After countless conversations with open and passionate people who feel deep ties to Albania, for the first time I could imagine saying that "I know what it feels like to be Albanian." I am coming to understand the complexity of the mixture of pride and sadness over what so many have lived through, or heard repeated in their tender youthful ears by those they loved, about the triumphs and the defeats this nation has experienced -- as individuals and as a community.

Thus, when I was generously invited to become an Albanian citizen, I felt no reluctance. I felt honored and able to accept this gift. I felt even more like who I am. I retain, of course, my American citizenship. I am that, too. But it is no stretch for me to proclaim that as of August 17, 2011, I, Eliza Patricia Dushku, am an Albanian-American.