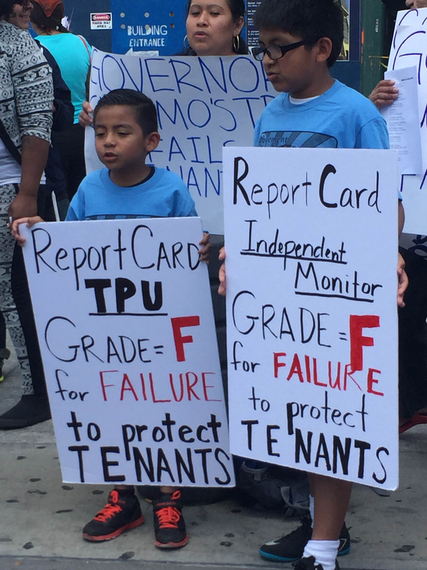 New York City is infamous for its unaffordable and undignified housing. Not only is the city's housing a clear and present danger to residents, as I've detailed before, but renters in Manhattan pay, on average, over $4,000 a month. This is untenable for the majority of American income levels and impossible for a city with half the population living in near poverty.

That infamy, however, is about to worsen, which is why my neighbors from East Harlem just gave Governor Andrew Cuomo an "F" today for failing to protect them from similar hardships. Governor's much-lauded Tenant Protection Unit, according to fellow tenants, isn't doing its job.

New Yorkers know by now that rent control, which is intended to keep the city affordable and accessible, isn't getting any favors from Albany, the state's capital. This week's expiration of rent regulations shows just how anti-tenant the state legislature remains, putting over one million apartments at risk for unreasonable rate increases.

Democrats, in response, are now plotting to unseat Governor Andrew Cuomo with a more pro-tenant candidate, and protestors, worried about becoming homeless due to higher uncontrolled rates, are planning sleep-ins on the Governor's office doorstep. This is just the beginning. Expect to see more uprising.

Developers keen to make a quick buck, however, must be thrilled with the anti-tenant nature of Albany leadership. Left unregulated, they'll be able to soar rental rates rapidly, tripling or quadrupling rents, forcing existing tenants to move elsewhere and making New York City a home for the high-income. But even if those regulations were in place, there are other ways developers can flip an apartment.

Take East Harlem, for example. I, and many of the tenants in my building, as well as other buildings owned by Castellan Real Estate Partners, live in a rent-controlled apartment. That means we're protected, in theory, from colossal rent increases. But when a landlord, keen to raise the rents, wants to break free from this regulation, other paths are pursued. Beyond lobbying Albany, which seems to be working given this week's developments, a landlord can flip an apartment by forcing a tenant out and subsequently jacking rates by as much as 50 percent. This is happening in East Harlem.

This displacement of low-income tenants should trouble anyone who cares about access, opportunity and the character of this city. And it should fall under the purview of the Governor's Tenant Protection Unit (TPU), which, according to its mission, preserves "affordable housing by detecting and curtailing patterns and practices of landlord fraud and harassment through audits, investigations and impactful legal actions."

East Harlem, consequently, and under TPU oversight, should, in theory, be witnessing fewer threats by landlords, fewer demands for citizenship documentation and false fees, fewer failures to deliver heat, hot water and cooking gas, and fewer tenants vulnerable to lead poisoning, mold and persistent rat infestation. And yet this isn't the case at all.

This is why the "F" grade was delivered to TPU's doorstep today in Harlem (see picture above). Tenants felt strongly that they were only getting lip service from TPU. And while the Governor served Castellan a subpoena to investigate harassment and intimidation charges and appointed a monitor to all of Castellan's 51 buildings throughout New York City, little has changed on the ground and in our apartments.

For many tenants, it appears as pro-tenant pomp and circumstance yet signifying nothing. Four of Castellan's buildings, mine included, still don't have gas and haven't for nearly a year. Many of Castellan's buildings, mine included, went without heat and hot water on many occasions throughout the winter (and some consistently). This is unacceptable and it's happening in Harlem.

Tenants are rightly refusing to concede that New York State and City are incapable of keeping landlords accountable. If the state wanted to, it could protect innocent families from the profiteering landlords and it could keep hard working families in their homes. And yet these tenant protection agencies seem so ineffectual to those on the receiving end of Castellan-type incompetence and corruption. We keep waiting for New York City's Housing Preservation and Development, which was similarly created to preserve "the stability and affordability of our existing housing stock" and which took Castellan to court, to hand down a win for tenants. The class action lawsuit potential here abounds.

Yet we keep waiting, as the tale of two cities takes a sinister turn. My neighbors and fellow tenants have had enough. That is why they rallied today in front of TPU and in no uncertain terms took tenant protectors to task - with an "F" - for failing at their job. Do better, New York.

Michael Shank is a resident of East Harlem and writes in his personal capacity.