With the Academy Awards this weekend, the media is buzzing about Glenn Close's new filmAlbert Nobbs. Ms. Close and supporting actress Janet McTeer have both been nominated for their portrayal of women passing as men in 19th-century Ireland. Watchingthe trailer left me thinking about the lives of actual transgender folks today. I would like to be able to say that over the past 100 years, we have become a more accepting and trans-inclusive global community. But in fact, if Albert were alive today, his life might be much worse.

Last July, at noon on a Tuesday, two transgender women were walking down a main street in Antalya, Southern Turkey, when a group of 15 men descended upon them wielding iron rods. They were badly beaten, tied up, and paraded in front of a large crowd that had gathered, none of whom intervened or called the police. This was an attempted lynching, fueled by transphobic hate, and just one of hundreds of similar stories to reach the media last year. Transgender Europe reports that in 2011, 221 people were brutally murdered, on every continent except Antarctica, for doing nothing more than being transgender. In the U.S. today, it is still legal in 34 states to fire someone if they are discovered to be transgender.

Glenn Close spent more than a decade struggling to get the support she needed to bring Albert to the silver screen. She told The New York Times that the psychological effect of finally completing the film was a sense of joyous closure, stating, "[T]here came a point where I asked, 'Am I willing to live the rest of my life having given up on this?' And I said, 'No I won't.'" Ms. Close understands that this film's importance stretches way beyond winning awards for convincingly playing a man. Regarding reactions to the film, she recently stated, "Some people will change their point of view, and those who are either too old, or too blinkered, to accept the beauty of difference will just have to 'die off.'"

So in honor of Ms. Close's determination and courage to bring us Albert, this month's Faces of Change blog features a transgender rights organization in Turkey called Pink Life. Urgent Action Fund for Women's Human Rights introduced me to Pink Life, a grantee of theirs that has been working tirelessly since 2006 to change a Turkish society that openly condones violence against transgender people and provides no clear legal or civic protection of transgender rights.

I asked Pink Life's Secretary General, Kemal Ordek, about what drove hir into trans rights activism and what sie wants the world to know about being transgender. (Kemal preferred that I use the gender-neutral pronouns "sie" and "hir" to express hir views.) Kemal explained, "Being trans in general means being unheard. But being trans in Turkey means to be a victim, a victim whose existence is denied, whose demands are ignored, and whose visibility is targeted by several powerful actors in society."

"The first time I felt I should take part in this important work was when Dilek Ince, a member of Pink Life, was shot to death in November 2008. Dilek Ince was a trans woman. We lost her, and the perpetrators of her murder were never arrested nor convicted, despite evidence given to the security forces."

Sie continued, "I was so depressed. I couldn't find a way to express my deep concern for the lives of trans people in Turkey. I was a member of the LGBT community and realized how marginalized the trans people were, even within the LGBT movement. I deeply felt that I should take part in the trans rights movement for myself and for the unheard voices within our community. This was another way working through my sorrow."

Kemal and hir colleagues at Pink Life recevied a $5,000 Rapid Response Grant from Urgent Action Fund to respond to the attempted lynching of the trans women mentioned above. They used the funds to pressure police and authority figures with both media attention and a public advocacy campaign, which eventually lead to the arrest and trial of those responsible. 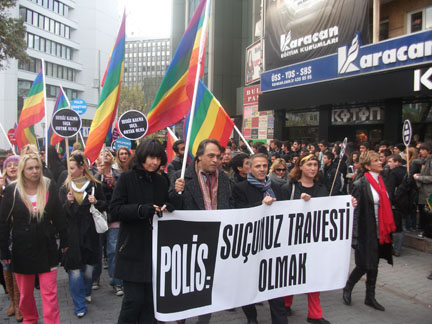 I was surprised, given the enormity of anti-trans sentiment in Turkey, that such a small amount of money, coupled with the dedication of Pink Life's staff, could prove so effective. But while Pink Life got the support to follow through this time, so many other incidents of transphobic violence are unacknowledged and unaccounted for. In Turkey, as in much of the world, there is very little social protection for you if your expressed gender varies from your assigned sex. That's what we are talking about here. The simple, non-violent act of expressing yourself in a way that upsets the gender binary of males as men and females as women. Well, it seems simple to me, but to the world it has become complicated and misunderstood.

I remember the first time that I recognized someone in my life as being transgender. I spent a great deal of my childhood in Mexico, and there was a transgender woman named Lupé who worked for the condominiums where we often stayed. While Lupé was visibly a woman, she also had a deep voice and sometimes had a 5-o'clock shadow. I was young and confused, and to be honest, Lupé frightened me a bit at first. I stood by silent as people made fun of her. But as I got to know Lupé further, we eventually became friends, and, with some well-intentioned guidance from my parents, I understood that sometimes people who appear as women were assigned "male" at birth, and vice versa. My adaptable, little mind easily accepted that there were more than just two genders, and no, my world did not end; in fact, it expanded. Because of Lupé, I had so much more choice when it came time to determine my own sexual identity.

According to Pink Life, transphobic hatred in Turkey is so widespread that transrights activists are specifically targeted because of their work. They wrote, "As trans activists, our freedom of movement is prevented, our freedom of expression is limited and we are faced with social exclusion and violence. In short, we are being 'hated' just because of our existence!" That about sums up transphobia: fear of an entire group of people just because they exist. So Kemal and I started a petition to the Turkish government demanding that they protect the rights of all their transgender citizens and that they drop the pending charges against three pink life activists who were arbitrarily detained and beaten.

Glenn Close clearly succeeded in provoking important conversations and placing transgender identity on the red carpet. But for the trans women who were almost lynched in Turkey, and for the thousands of other victims of transphobic hate crimes, the world is changing too slowly. The number of reviews I read that called the film's lead character "creepy" and "un-relatable," or referred to Albert as "it" rather than "him," was in itself disturbing and sad. We will know things have really changed when a trans man wins an Oscar for playing a leading male role, and his sex at birth is not even mentioned. Until then, while Ms. Close thanks the Academy, I would like to thank the brave trans rights activists, like Kemal Ordek at Pink Life, who risk their lives every day to speak up for trans folk, even though no one is giving them golden awards or celebrating their hard work in front of millions.

If you would also like to express your gratitude or solidarity to the trans rights activists at Pink Life, please do so in the comments below. If you feel compelled to add your name to Pink Life's call for equal rights and freedoms in Turkey, please take a moment and sign our petition. And just in case, if you are Glenn Close, and while accepting your award you feel inspired to mention the thousands of trans rights activists working today against the same forces of hatred and ignorance that Albert withstood, this is your moment.