I'm just giddy at the thought that former Attorney General Alberto Gonzales is going to grace the world of letters and pen some sort of memoir -- a 'tell all' which, if things hold true to form with the Accepted Traditions of Alberto Gonzales, will likely tell us very little about what went on in his Justice Department and the extent to which Gonzales was responsible.

Fittingly, Gonzo hasn't been able to get a job since departing the White House, because, as the Wall Street Journal mildly puts it, most law firms are "skittish" about hiring someone with his reputation. And in America, when you cannot find a group of lawyers to stand by you, that's saying something. Even Rod Blagojevich has a lawyer, who thinks Blago is "fun." The drive to produce a book likely stems from these post-White House blues, something Gonzales seems to acknowledge:

"What is it that I did that is so fundamentally wrong, that deserves this kind of response to my service?" he said during an interview Tuesday, offering his most extensive comments since leaving government.

What did Gonzo do? Let's revisit that subject with this lovely Venn Diagram produced by Slate. Note who is at the center of it all (you can get further interactive information by clicking here). 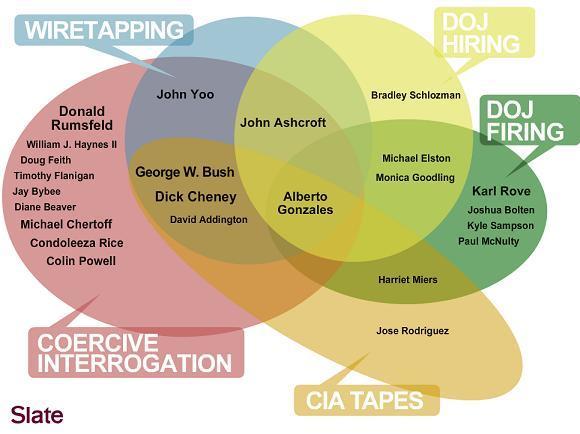 Given that Gonzales was positioned at the dead center of every major scandal that has, as Slate's Dahlia Lithwick once put it, "demoralized" the Justice Department, you'd expect any book about his time at the DOJ to be a gripping read. Nevertheless, I think it's safe to say that Gonzales' book will begin with the story about how Monica Goodling bolstered his spirits by tossing him apples, followed by fifteen chapters detailing his failure to remember anything. The end.