Last winter, at a group exhibition in Wilmington, Delaware, I encountered and promptly fell in love with a group of small paintings by Adam Lovitz. Luckily I've been able to see more of his work in recent shows, including most notably a two-person exhibition with Sarah Peoples titled Who Say It Be, currently up at the Pennsylvania Academy of Fine Arts. His paintings drew me in with their brazenly seductive surfaces, but there's something beyond their skins worth chewing on, a conceptual richness that echoes in his collages and installations. 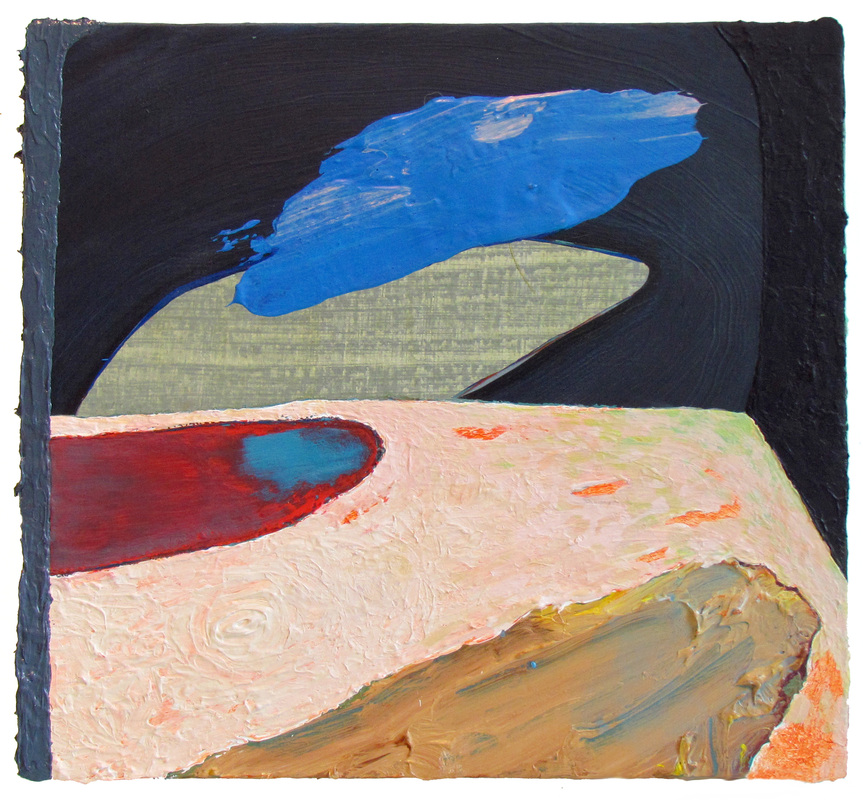 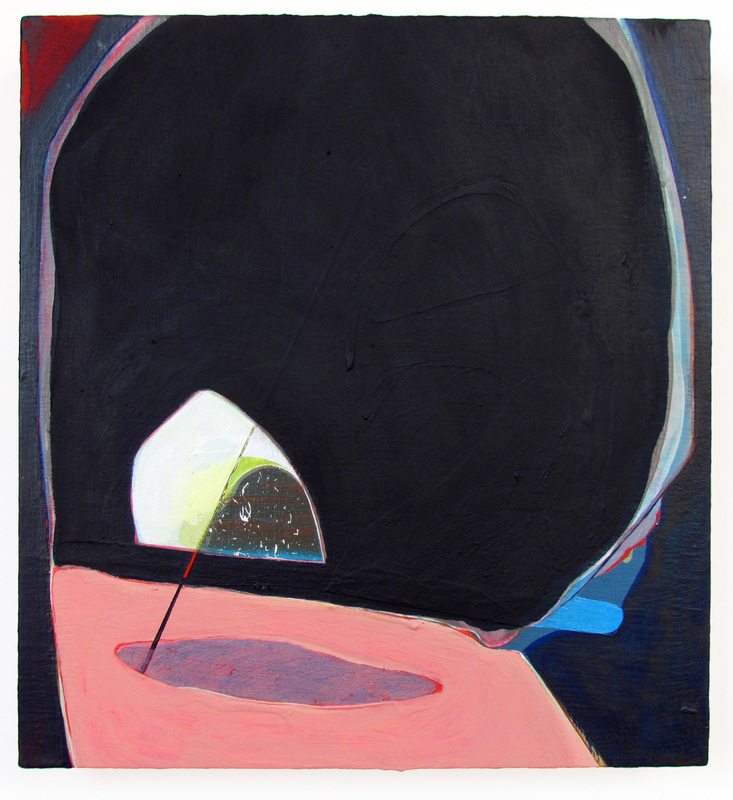 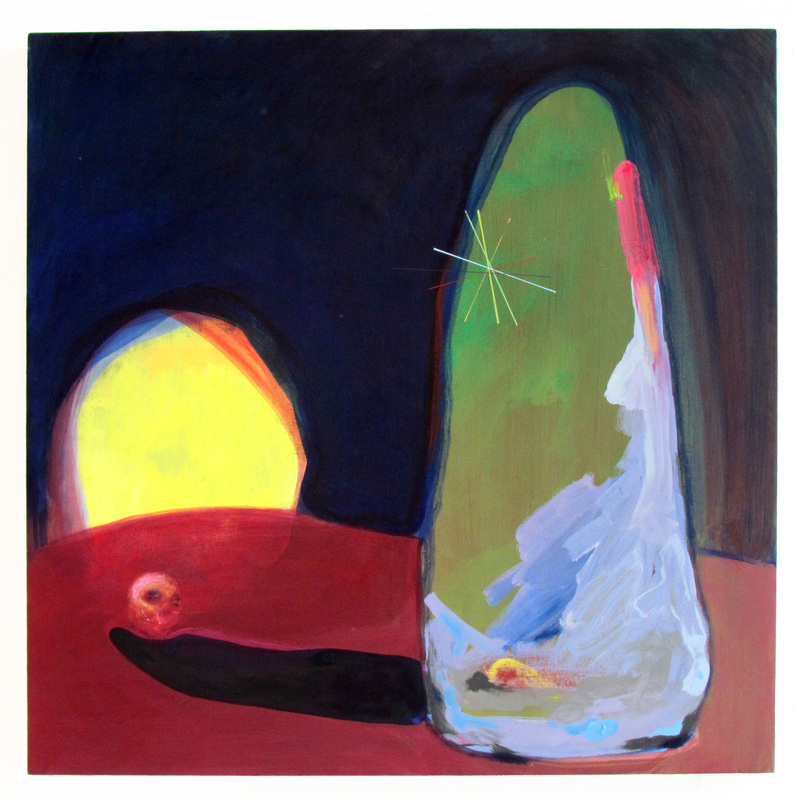 According to Lovitz himself, the interconnectedness of all things in the universe, and the notion that we are all made of cosmic dust, inspire much of his creative activity. In small paintings like Dark Set Romance, one can spot the pure black of outer space against friendly, whimsical terrains of imagined planets. The paintings envision the unknown universe as an inviting place. In Who Say It Be, the large installation Star Stuff tackles our relationship to the universe head-on, but Lovitz's understanding of cosmic truths is perhaps best expressed through a series of smaller installations, collectively titled Inventing the Universe.

In each installation, a collage is mounted directly on the wall at eye level. A semi-circular shelf of colored, transparent plexiglass extends from the bottom of the collage, holding an assemblage of tiny found objects. The overhead light in the gallery casts a long, round pool of color on the wall beneath the shelf, and the objects produce individual shadows within the orb. The top two sections of the installation, collage and found object assemblage, attempt more or less the same task in 2 and 3 dimensional modes. Both sections aim to strike a resonant chord through the pairing of random entities (or depictions of such) and illuminate their ordinarily unseen relationship -- their basic commonality as star stuff. The collages are overwhelmingly successful at finding these notes independently; they could stand on their own. The assemblages, on the other hand, accomplish more in collaboration with the bottom third of the installation. 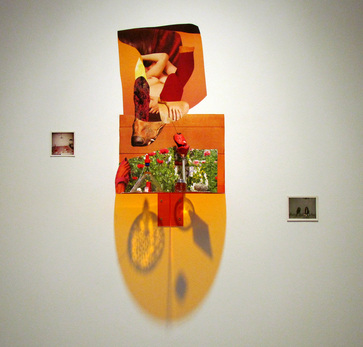 In the "painting" beneath the shelf, light uniformly distills the objects' disparate physical properties into pure, immaterial imagery. The result suggests the guts of a cell, or planets swimming in the soup of space. It's a visual theme that recurs in his collages, but this particular event was unexpected -- a simple consequence of assembling found objects on the tinted shelf. Taking in the piece, one feels as if a page from some great mystery has been revealed, implying the primordial common denominator of all material things and exposing their ordinarily unseen essences. I felt real joy discovering the exquisite harmonies in the light painting, as if I'd received a rare, reassuring glimpse into the hidden structure of the universe.

While Lovitz frequently names Carl Sagan as one of his greatest influences, I also detect the aesthetic and thematic influence of filmmaker Alejandro Jodorowski. I first noticed the relationship in a recording of Lovitz's 2012 performance Cave Dweller, which immediately recalled the feeling of Jodorowsky's Holy Mountain. Now, looking more deeply, I can see how the topics of alchemy and mysticism crop up repeatedly in Lovitz's paintings and installations while, visually, the work utilizes a similar blend of the surreal and the profane. 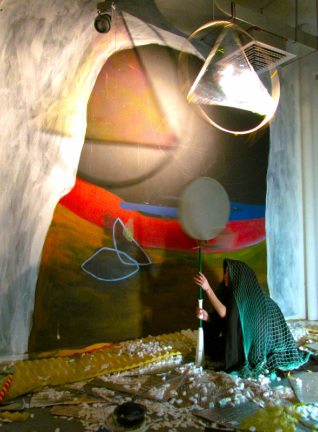 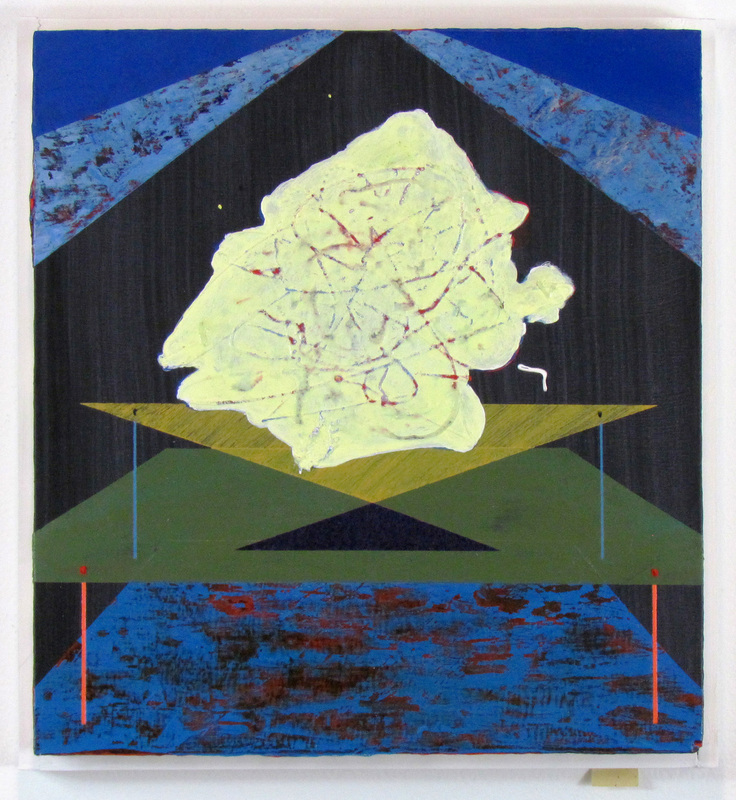 The painting No Matter resembles an invented mystical symbol that alludes to the pentagram, but the painting also opens up into pictorial space. A multi-tiered platform presents a lumpy, white object containing a mass of red lines. The scene, along with the title, implies an alchemical transformation from insignificance to preciousness -- no-matter to matter. The red lines represent the force of magic, or the energy of the transformation, swirling around and through the mass. The painting dually serves as a symbol-object and as a representation of, suggestively, the consequences of said symbol's use. When I first saw Bottled Basement Fumes, I thought a glittering rhinestone had been glued to the panel, toward the top. When I examined the painting up close, I discovered instead an abstract glop of paint. The moment playfully nods to the potential for painting to act as a form of alchemy itself. Paint, an organic, oily material, has no real intrinsic value. The artist, through the magic and ritual of creativity, has the power to manipulate the material into a state of beauty and meaning. 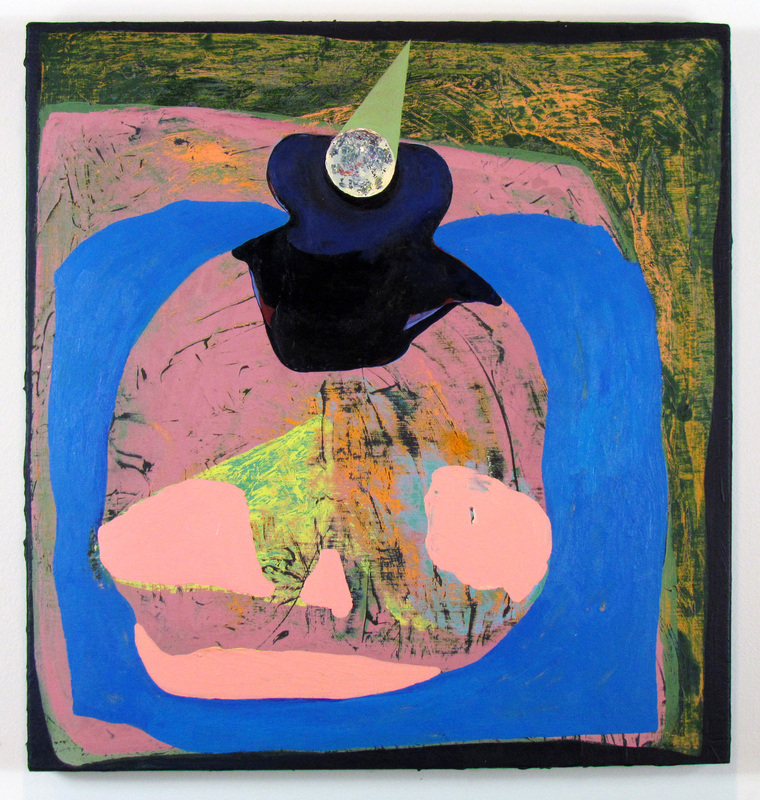 While Lovitz's work imagines solutions to cosmic mysteries, the artist clearly revels in the Earthling's condition -- revels in the materiality of paint; in the shit, vomit, hair weaves and Cheetos that collect on his street in South Philly. The vulgarity of human life crops up repeatedly in the imagery of his collages, in the forms of his paintings, and in the insinuations of his found object manipulations. The work projects his joy in the common ancestry of the sacred and the profane -- his joy that we are all made of star stuff, and it presents us with his distinct version of alchemy. In traditional alchemy, no trace of the original material remains in the transformed product -- the rock has completely changed to gold. In Lovitz's variety, he reveals the diamond without hiding the paint -- he finds the gold in embracing the rock.

Who Say It Be is on view until October 13, in the Samuel M. V. Hamilton Building of the Pennsylvania Academy of Fine Arts, 128 North Broad Street. More of Adam Lovitz's work can be found at www.adamlovitz.com