Officials at the government agency tasked with studying the health effects of alcohol aggressively courted alcohol executives to fund a $100 million clinical trial on “moderate drinking,” according to recently published investigations by The New York Times, Wired and Stat.

The executives complied, according to the Times, with the understanding that this research would probably conclude alcohol is safe and lowers the risk of disease.

Together, these reports paint a disturbing picture about the way alcohol companies are trying to influence scientific understanding, and thus public perception, of alcohol as a health tonic.

If you’ve ever seen headlines about how red wine is good for your heart, or how moderate alcohol use is linked to longer life, you’ve seen the alcohol industry’s influence on health science at work. And Americans seem to be swallowing that message. A 2015 Gallup poll found that 1 in 5 Americans believe “moderate” drinking is good for health, and that this was especially true among those who drink alcohol.

This belief is a boon for the alcohol industry for at least two reasons: It links alcohol consumption to a healthy lifestyle that can improve heart health, and it relies on the concept of “moderation,” a squishy term that in practice ends up meaning whatever drinkers want it to mean.

Alcohol executives were allowed to help pick the scientists and preview the trial’s design, reports the Times, while Wired reported on how dependent the National Institutes of Health’s National Institute on Alcohol Abuse and Alcoholism (NIAAA) is on industry funding to complete the expensive, long-term study. Finally, Stat has a story about how scientists who published unflattering research about the alcohol industry were verbally abused by NIAAA officials and cut off from funding.

It’s kind of the whole reason we have an independent science sector ― to wall it off from conflicts of interest like this. David Jernigan, Boston University School of Public Health.

Even though the scientists involved in these studies, all from prestigious universities, may insist that they have independence in their work, studies show that research funded by the food industry is four to eight times more likely to conclude something that financially benefits the sponsor. Industry-funded research also tends to suppress negative data. When pharmaceutical companies fund studies, the findings are less likely to be published than research funded by other sources.

“The obvious conflict of interest is that the funder of this research stands to benefit when the research comes out with findings that encourage more people to use its products,” said David Jernigan, a professor at the Department of Health Law, Policy and Management at the Boston University School of Public Health. “It’s kind of the whole reason we have an independent science sector ― to wall it off from conflicts of interest like this.”

Why food and drink companies love the word ‘moderation’

Research on the concept of “moderation” reveals that the more a person likes a food or drink, the bigger their definition of what a “moderate” serving is. And food and beverage companies may be using that to their advantage, said Michelle vanDellen, an expert in self-control and eating behaviors at the University of Georgia.

“I don’t know if food and beverage companies have done research on moderation,” she said. “I have, and I know that moderation messages are poorly defined, they increase the scope of what is considered healthy and they lead to increased intended consumption.”

When it comes to alcohol, at least, there is a seemingly objective unit of measurement for moderation: up to one drink a day for women, and up to two drinks a day for men, as defined by the U.S. Dietary Guidelines for Americans. These amounts form the basis of claims that alcohol may have a positive effect on health.

But careful analyses have debunked the association between moderate alcohol consumption and health by taking the “abstainer bias” into account. People who currently abstain from alcohol include those who have never consumed it and former drinkers. But many former drinkers have quit alcohol for health reasons, so the “abstainer” group is already biased toward worse health overall than a group of people who are still moderate drinkers and haven’t had to quit because of their health.

Similar analyses have been performed for breast cancer, revealing that even low levels of alcohol are linked to a higher risk of the disease. An analysis that removes former drinkers from the results in heart disease research, however, had more positive findings about alcohol: Even after accounting for the abstainer bias, never-drinkers had a higher risk for a handful of heart conditions than moderate drinkers.

This association could explain why the U.S. Dietary Guidelines (the federal government’s advice on eating and drinking) used to explicitly link moderate alcohol consumption to lower risk for coronary heart disease and cardiovascular disease. But in the latest guidelines, which are official recommendations meant to span 2015 to 2020, this language was removed.

This may be because health hazards associated with alcohol consumption ― like violence, car collisions, substance abuse, liver disease and cancer ― more than cancel out whatever marginally positive effects alcohol could have on heart disease risk.

“To put it another way, there are much safer ways to protect your health than starting to drink,” Jernigan said.

Almost 90,000 people die from alcohol-related causes every year in the U.S., making it the third most preventable cause of death after tobacco and the combination of lack of exercise and poor diet. More than 15 million adults and 600,000 teens have alcohol use disorder in the U.S., and more than 10 percent of children in the U.S. live with a parent who struggles with alcohol problems. Alcohol use also increases one’s risk of breast, colon, liver, esophageal, head and neck cancer.

These ties to other diseases and health risks are why some scientists are calling for moderate alcohol guidelines to be even lower than what they are now. A recent analysis of about 600,000 current drinkers from 19 wealthy countries found that the risk of death from any cause begins to increase after a person drinks more than 100 grams of alcohol per week ― the amount in about seven servings of alcohol. But that’s half the “moderate” alcohol serving for men in the U.S.

“The health effects of drinking are so clear,” said Jernigan. “There just aren’t a lot of products that are legally available that kill over 100,000 Americans every year and are still on the market.” 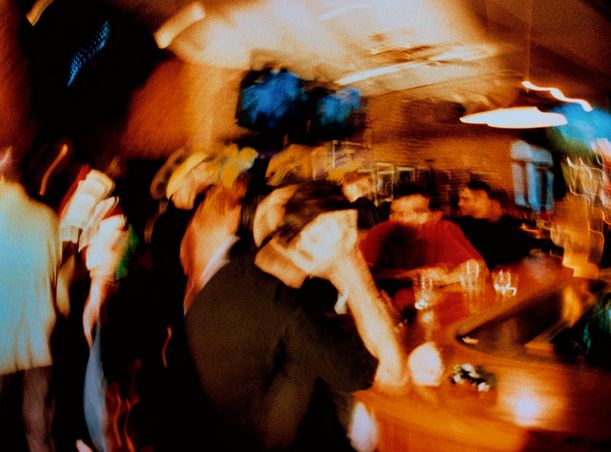