Since Colorado legalized marijuana last year, politicians and pundits have focused intently on health and safety concerns surrounding legal weed. But a new study from the Centers for Disease Control and Prevention suggests a more imminent danger for the state and its neighbors: alcohol.

According to the report, published in the journal Preventing Chronic Disease, Colorado and other Mountain-region states have the highest alcohol-related death rates in the country -- several points higher than the national average of one in 10 deaths. 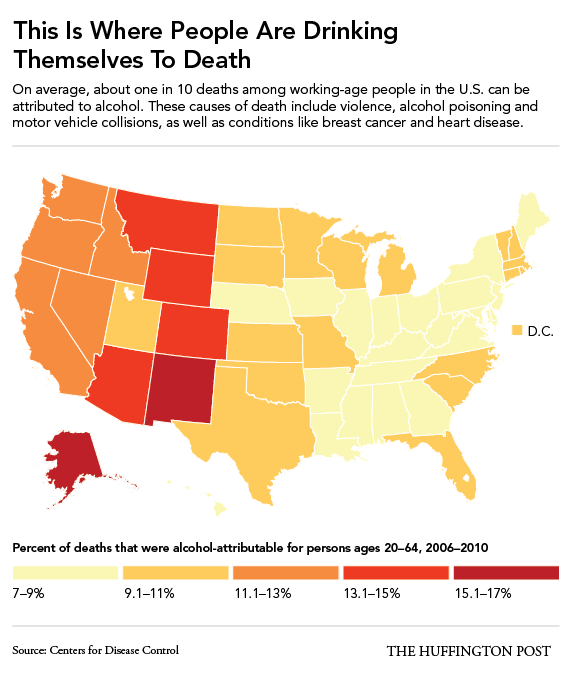 New Mexico leads the country with 16.4 percent of alcohol-related deaths, while Maryland has the lowest rate at 7.5 percent. Regionally, Alaska and almost all of the Mountain-region states have alcohol-related death rates higher than the national average. The stark exception: Utah, which has some of the most restrictive alcohol selling and purchasing laws in the U.S.

"Excessive alcohol use is a huge public health problem," study researcher Dr. Robert Brewer, of the CDC's Alcohol Program, told The Huffington Post. "It's killing people in the prime of their lives."

For the report, CDC researchers tallied alcohol-related causes of deaths from 2006 to 2010. They scanned 54 different causes of death linked to alcohol, which range from acute conditions like violence, alcohol poisoning and motor vehicle collisions, to chronic conditions like breast cancer and heart disease. Researchers estimate that excessive drinking kills an average of 88,000 people in the U.S. each year, and shortened the lives of those who died by an average of 30 years. About 70 percent of these deaths involve working-age adults ages 20 to 64.

"At the time we were putting this tool together and coming up with the methodology, we just didn't have good estimates of the relationship between alcohol and certain conditions," Brewer explained. Additionally, the numbers are based partly on self-reports of alcohol consumption, and people generally tend to underreport the amount they drink.

"So even though it's a big number, we really think this is a significant underestimate," said Brewer.

Alcohol is a toxin and known carcinogen that can increase the risk for chronic health conditions or escalate their severity. Because an estimated 38 million Americans drink alcohol excessively, there's a lot of potential good that could come from people choosing to drink just a little less, said Dr. David Crabb, director of the Indiana Alcohol Research Center. Crabb wasn't involved in the study, but praised the new research and echoed the need for intervention at an individual and public health level.

"A lot of the injury isn't just the people you consider alcohol abusers, but a much a larger group that binge drink or consume higher levels than recommended -- more than 1 [to] 2 drinks a day," Crabb told HuffPost.

One of the most important things drinkers can do is educate themselves on the proper serving sizes of their favorite beverages. For instance, one big wine glass may actually hold two servings, and a pint of craft beer will likely have higher alcohol content than a standard 12-ounce beer, Crabb said.

Medical professionals can also do their part by asking questions about alcohol use during primary care check-ups and hospital visits, Crabb added. Even a brief "intervention" about the dangers of heavy alcohol use can be enough to encourage an estimated 25 percent of excessive drinkers to take the drinking down a notch.

And on a policy level, local governments can try to curb alcohol-related deaths by increasing state taxes for alcohol, regulating alcohol store density and holding alcohol retailers legally responsible if they sell alcohol to people they shouldn't.

CLARIFICATION: This story was edited to clarify the distinction between all alcohol-related deaths and the deaths of people ages 20-64.