We know that a nightcap -- or three -- won't help us drift off into a peaceful slumber. But we didn't know exactly why it sets us up for a restless, sweaty, snore-y, anxious night.

Thanks to an April 2013 review of 20 studies -- and to the more than 500 people who drank in the name of science and then turned in for the night in a sleep lab so that researchers could record their brainwaves -- it's been confirmed: If you only have a bit to drink, alcohol can help you sleep better during the first part of the night, spurring an increase in slow-wave sleep, which the body needs in order to repair tissues and strengthen the immune system, and leaving dream-studded REM sleep untouched. Too much booze, however, can interrupt REM sleep, which is vital for memory and concentration. As the alcohol wears off during the second part of the night, sleep is often disrupted, the review found, as people frequently wake up. (In some cases, they'll also start sweating, feel anxious or -- if they do manage to get some REM sleep -- have nightmares.) But that's only the beginning of how alcohol gets between you and a decent night's rest.

It's Especially Disruptive to Women
After an evening of drinking, women, in particular, are likely to be tossing and turning, a 2011 study found. Although everyone in the study drank until they were equally drunk (the researchers doled out drinks adjusted for gender and weight and measured intoxication by breath alcohol content), the female participants woke up more often during the night, stayed awake longer and slept for less time overall than the men. This might be because women metabolize alcohol more quickly -- meaning they speed through alcohol's sedative effects and get to that second, fragmented part of the night sooner.

It Reacts Badly with Sleep Aids, Both Prescription and Natural
Many prescription sleep medications should never be taken after drinking, including Ambien, Lunesta and other drugs often given to people suffering from insomnia. "Somebody could essentially stop breathing if they mix alcohol with any of those medications,” says Dr. Reena Mehra, a sleep-disorder specialist at the Cleveland Clinic. But even natural sleep aids and alcohol don't go well together: Melatonin, a chemical produced by the body to regulate circadian rhythms, which is taken as a supplement to improve sleep, can form a sort of biological echo chamber with alcohol, with each increasing the other's sedative effects.

It Has You Making Trips to the Bathroom -- or Regretting Your Trip to the Pizza Place
Alcohol is a potent diuretic, so those after-dinner cocktails can send you tiptoeing to the restroom several times during the night. And that late-night slice of pizza or order of cheese fries you had in an effort to soak up the booze and prevent a hangover (which, sad to say, doesn't work anyway -- the alcohol has long since gone into your bloodstream) can trigger acid reflux when you lie down, keeping you from falling asleep.

It Makes Sleep Problems You Already Have Even Worse
Alcohol decreases muscle tone in the upper airway, meaning that breathing-related sleep issues are exacerbated after you've had a couple of drinks, Mehra says. That's especially bad news for people with obstructive sleep apnea, who stop breathing for short periods during sleep when their airway is blocked: Since alcohol makes the airways especially collapsible, people suffering from sleep apnea tend stop breathing more frequently and for longer periods after drinking. The reduced muscle tone from even a couple of drinks also aggravates less serious, but more familiar, problems. "It worsens snoring," Mehra says. "I can attest to that with my husband."

PHOTO GALLERY
Sleep Gadgets So Weird They Just Might Work

Alcohol Side Effects: 4 Ways Drinking Messes With Your Sleep
Sleep Gadgets So Weird They Just Might Work 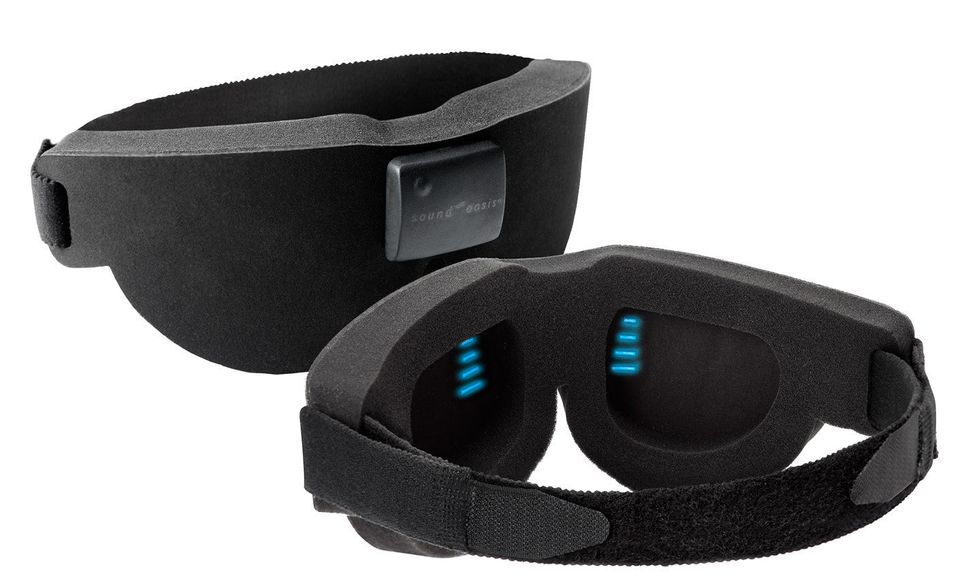 1 / 6
A Set Of Blackout Shades You Wear On Your Face
<strong>What:</strong> <a href="http://www.sound-oasis.com/gts-1000/" target="_blank">Glo to Sleep Mask</a> <strong>How it works:</strong> This mask is supposed to help you get into a meditative, sleep-primed state: You gaze upon the blinking blue lines in the eye panels until they fade away or your relaxed brain lets you nod off -- whichever comes first. <strong>Why we'd like to try it:</strong> We're just as interested in the black void <i>around</i> the glowing lines. We know that <a href="http://www.oprah.com/oprahradio/The-Value-of-Sleep" target="_blank">making the room as dark as possible</a> signals the pineal gland to start producing melatonin, the body's natural sleep drug. This foam mask looks like it will block out light as well as room-darkening curtains yet won't affect a partner who likes to wake up with the sun. (Bonus: Because the Glo to Sleep mask sits slightly off the face, it may accommodate long eyelashes better than traditional eye masks). <strong>Price:</strong> $30
Sound Oasis